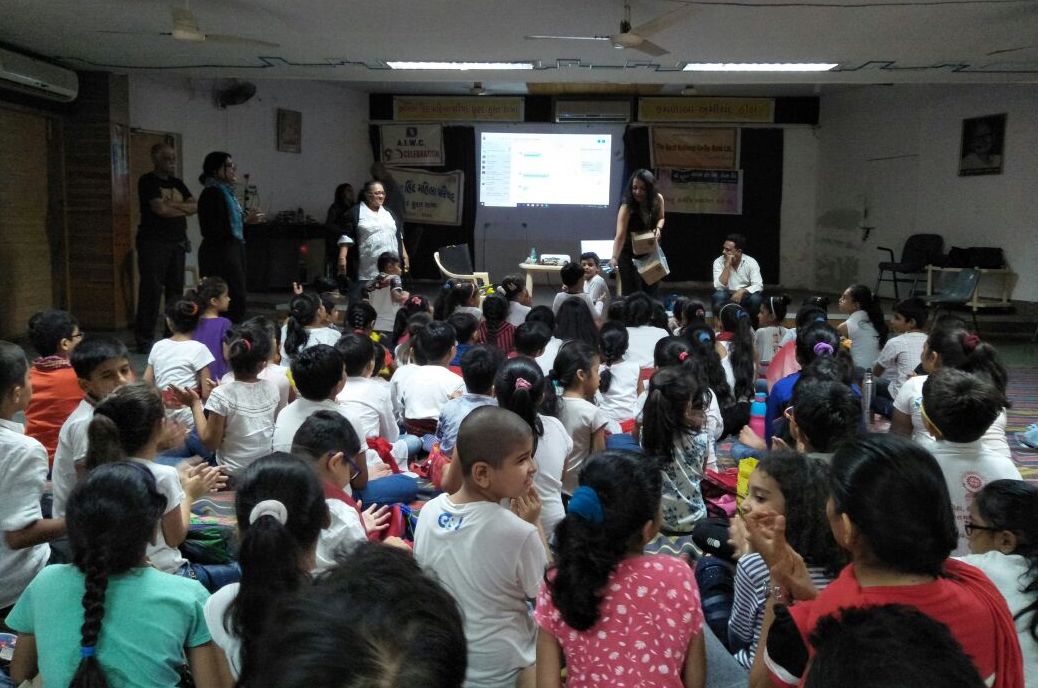 Despite ongoing tensions between India and Pakistan and threats to peacemakers, citizens on both sides continue working to build bridges. One such effort is the series of peace education programmes in schools across Pakistan and India organised by the youth group Aaghaz-e-Dosti in collaboration with local groups.

On 5 May 2018, AeD organised its 14th “Classroom Connect between students of an activity learning school in Karachi, Pakistan and a summer camp in Surat, India. The local organisations were Akhil Hind Mahila Parishad, Bruhad Surat and L2L, Learn to Learn, a Karachi based social organization that runs alternative schools. Sagar Papneja of Aaghaz-e-Dosti, Surat, and Adnan Kudiya, an educator from Karachi, coordinated the session that connected some 150 students.

A student in Surat talks to students in Pakistan.

Before starting the session, the coordinators asked the students to share their views about the other country. The students voiced stereotypes and misconceptions they said they had obtained from parents, movies, and news. The coordinators gave an analogy, pointing out that they choose their own best friends, not who their parents tell them to befriend. So why not apply that to this situation? They should choose their own friends and even foes after analyzing, talking to them and then deciding. The students agreed.

After initiating the video connection, coordinators played both national anthems. This was followed by a discussion about summer vacations. During the hour that the students interacted, they asked each other questions about favorite food, movie actors, songs, school vacations, and more. They shared their likes and dislikes and found much in common.

Students in Karachi talk to peers in India.

They were thrilled to discover they had the same favorite movie stars — Fawad Khan, Hrithik Roshan, Tiger Shroff, Salman Khan. They also like ice cream and faluda, and cricketers like Afridi, Dhoni and Virat. And they hate school uniforms. When the Pakistani students got to know about the birthday of a student on Indian side, they sang a birthday song.

As the session concluded, students asked for the time to be extended. They sang “Swag se karenge sabka swagat” and “Bahubali” for each other. By the end of the session, the students felt they had friends across the border, and that they share similar cultures. They no longer saw each other as enemies but as friends with a positive future ahead.

Their glowing faces after this first ever experience expressed their happiness at meeting their peers across the border.

Aaghaz-e-Dosti is a collaborative peace initiative of two voluntary organisations, Mission Bhartiyam, India, and Hum Sab Aik Hain, Pakistan. The groups believe that students are the future of our countries and have the potential to build bridges of peace and reconciliation that will pave the way for the future.

— Based on a press release by Aaghaz-e-Dosti, http://aaghazedosti.wordpress.com; email: [email protected].