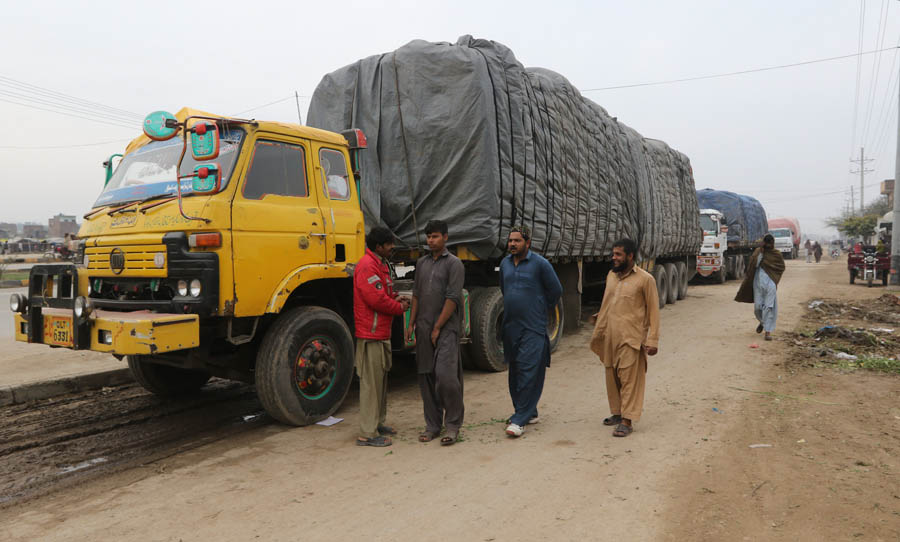 In the absence of banking and communication facilities, cross-LoC trade had made a remarkable contribution to the improvement of the economic conditions of marginalised communities across the Line of Control. The suspension of this service will risk the livelihood of many

The abrupt suspension of cross Line of Control trade for an indefinite period between the divided parts of the erstwhile State of Jammu and Kashmir has stirred an uproar on both sides of the Line of Control (LoC). Traders had to face huge financial losses as dozens of goods-laden trucks plying between Muzaffarabad and Srinagar were returned unexpectedly.

The Ministry of Home Affairs of the Indian government has given three reasons for suspending the trade: First that this trade was being used to channelise funds for militant outfits. Second that arms, narcotics and counterfeit currency notes were being sent to Indian-held Kashmir via this trade, and third that a number of goods which were not being produced in Azad Jammu and Kashmir or India-held Kashmir were being traded.

All of the above reasons deserve close scrutiny, however, instead of making a knee-jerk decision to suspend trade altogether, the government of India could have consulted trade unions and other stakeholders to address these complaints. Some complaints of a similar nature have also been noticed about Wagah-Attari border trade but hardly anybody is demanding the stoppage of trade there.

Cross-trade had made a remarkable contribution in improving the economic conditions of marginalised communities living across the LoC, communities that have borne the brunt of violence and cross-LoC firing between India and Pakistan for the last 28 years of conflict. Keep in mind that these areas are highly militarised and the civilian population lives under a strict watch.

Since its inception in October 2008, just a month before the Mumbai attacks, this cross-LoC trade initiative largely known as a Confidence Building Measure (CBM) has faced a number of ups and downs in the context of the India-Pakistan relationship. But luckily it had managed to survive, and to a great extent, even thrive. Islamabad and New Delhi did not stop trade and travel between the two parts of Jammu and Kashmir even during challenging times – not after the Mumbai attacks, nor after the Pulwama one.

Despite lack of banking and communication facilities, cross-LoC trade created a small yet vibrant community on both sides, running trade not merely for economic gains but also enhancing connectivity between the two parts of the state of Jammu and Kashmir. This revived centuries-old trade routes and broken community relationships. It also developed a sense of economic interdependence.

Currently, zero-duty trade is being conducted for four days a week through a barter system at two trading points i.e. Uri-Muzaffarabad and Poonch-Rawalakot. The Indian Express, in an editorial published on April 20, noted that trade is being conducted through a barter system, as India and Pakistan could not reach an agreement on currency transactions, even though the trade’s value grew from Rs10 million in 2008-09 to over Rs300 million (Indian rupees) at present.

Cross-LoC trade created a small yet vibrant community on both sides. This revived centuries-old trade routes and broken community relationships. It also developed a sense of economic interdependence.

Talking about the economic logic of this trade The Hindu puts some interesting facts in its editorial published on April 23. It says, “It is estimated that since the barter trade commenced along two routes across the LoC in October 2008, the volume of trade over the decade has crossed Rs600 million (in Pak rupees). It must be kept in mind that the trade is mostly of local goods, and those employed, including in the transportation, are from border communities.”

The decision to suspend trade is being seen as part of the ongoing general elections campaign in India. Besides, the current BJP government is gradually shrinking various communication linkages, including travel and trade, in order to coerce Islamabad into toeing its line. It is also being seen as another step to push the people of Kashmir against the wall, following the closure of the National Highway to civilian traffic for a day every week to enable smooth movement of convoys.

The BJP’s election agenda and slogans also show that the party is bent on disempowering the people of Kashmir by clipping Article 370 and removing the constitutional safeguard 35-A which ensures J&K identity and special status.

Almost all major political leaders from both sides of the LoC, including All Parties Hurriyat Conference has condemned this decision and urged the Indian government to resume trade. The trade bodies of Srinagar and Muzaffarabad are also criticising this decision and lobbying for its early reversal.

Former chief minister Omar Abdullah tweeted that “The Modi government buries another of the Vajpayee era CBMs. Cross LoC trade was a legacy of the Vajpayee government’s decision to facilitate greater people-to-people contact across the Line of Control in J&K”.

The president of the Traders Union at the Rawalakot-Poonch Sardar Kazeem trading point, said while talking to TNS, that this was a hasty decision and should have been taken after giving traders at least some kind of warning. “A large number of trucks were loaded with perishable goods when the decision came. These goods went rotten on the border and we lost millions of rupees in one night, besides losing a decent livelihood. New Delhi’s decision deprived over four hundred people, mostly young, of livelihood on both sides.”

Echoing the traders and Kashmiri leadership’s voice, The Hindu criticised the decision heavily in its editorial. It states, “The government’s concerns may be well-founded but the solution to violations of a trade agreement is to enforce the rules stringently, not stop the exchange of goods and to put at risk the livelihood of countless people on both sides of the LoC.”

In a statement, Srinagar-based Kashmir Chamber of Commerce and Industry (KCC&I) lamented the unilateral decision made by New Delhi and reminded the government that the chamber’s suggestions to bring transparency to the trade had previously been ignored. The installation of a full body scanner, closed-circuit television cameras (CCTVs), banking facility, communication infrastructure, re-verification of traders, regular rotation of officials posted at Trade Facilitation Centres were major recommendations made by KCC&I that were overlooked.

For a long time, traders on both sides of the LoC have been demanding the opening of branches of Jammu and Kashmir Bank and Azad Jammu and Kashmir Bank at cross-points to make verifiable transactions. The 18th-century old barter system proves to be cumbersome not only for traders but also for both the governments. Sources in the Pakistani government say that they are willing to talk about all issues related to trade and travel, including banking once the formal India-Pakistan dialogue gets resumed.

In September 2012 Pakistan’s Minister for Foreign Affairs, Hina Rabbani Khar and her counterpart S.M. Krishna reviewed the recommendations made by the Joint Working Group (JWG) on cross-LoC CBMs. They agreed to hold the JWG on cross-LoC CBMs meeting on a bi-annual basis in order to review the existing arrangements and suggest additional CBMs and measures for cross-LoC travel and trade. The two officials also agreed that both sides would facilitate the exchange of business delegations.

Lamentably, no tangible steps were taken in the subsequent years to improve the infrastructure and regulations. Now, some observers suggest that the contentious issues related to trade and travel should be resolved at the local level and a joint investigation team for both countries should be established to investigate the cases of narcotics and arms smuggled across the LoC.

Authorities on both sides can periodically monitor the daily trade practices like the registration of traders, invoicing and exchange of goods, trade balancing, etc. to address the allegations of hawala money, under-invoicing, misrepresentation of goods, etc.

Luckily, the government of India says it is willing to revisit its decision and resume trade after putting in place more effective measures. However, the governments of Pakistan and Azad Kashmir are demanding the unequivocal restoration of trade. “Hope sanity prevails and New Delhi resumes trade activities sooner than later,” says Halal Pirzada, a Muzaffarabad-based trader, echoing the sentiments of many.