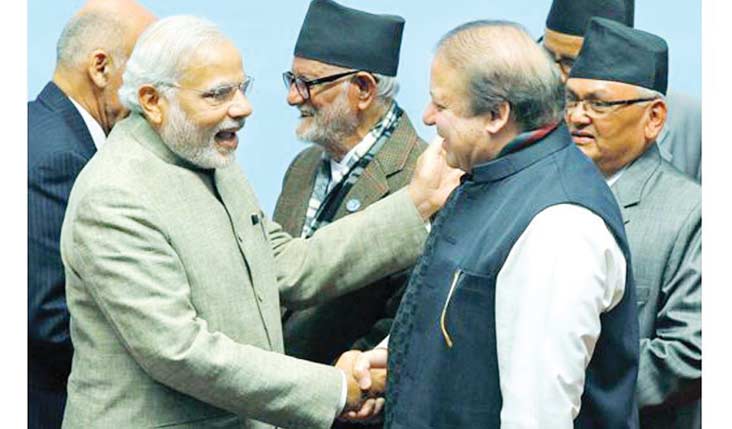 It is a measure of the poor relations between Pakistan and India that a routine meeting, a smile and a handshake, becomes news.Indian and Pakistani Prime Ministers Narendra Modi and Nawaz Sharif’s handshake at the recent SAARC summit in Kathmandu raised hopes that the two countries would restore the ceasefire along the Line of Control (LoC) and resume dialogue.

That the leaders of Nepal and other countries tried to facilitate the ice-breaker speaks for how India Pakistan relations affect the region.

“Nepal was making efforts not only for a handshake between India and Pakistan, but we were also trying to bring closer the minds of the two leaders,” said Nepalese Foreign Minister Mahendra Bahadur Pandey.

He added that the President of Afghanistan, Ashraf Ghani also played an important role in breaking the ice and that “the effort was made collectively by all SAARC leaders as well”.

Analysts hope that the stalled peace process will resume after Modi and Sharif’s interaction at the concluding session of the Saarc summit.

As a first step, the ceasefire along the LoC and the working boundary must be restored, before a meeting between the two foreign secretaries.

India had cancelled the foreign secretaries’ talks in August in protest at the Pakistani high commissioner’s meeting with Kashmiri leaders in New Delhi. In October, ceasefire violations by both armies along the LoC and working boundary killed at least two dozen people, mostly civilians, on both sides of the frontier. Sharif has said that Pakistan must focus on economic development and stressed that good neighbourly ties have to be on the basis of equality.

Over eighty Hindu pilgrims from all over India visiting Pakistan for a pilgrimage to their holy site Katas Raj returned last week. Pakistan District Coordination Officer Asif Bilal Lodhi, Assistant Commissioner Choa Saidan Shah Samina Saif Niazi and other officials received the pilgrims. Two receptions were also held for them, at which hosts and guests exchanged gifts. “You can visit your holy sites whenever you want. You will always be welcomed with love,” said Saddiqul Farooq, Chairman Evacuee Trust Property Board. “We should respect every religion. If we respect humanity our problems will solve”. “The love and respect which you people gave us can never be forgotten,” said group leader Shiv Partab Bajaj.

He appreciated the renovations to the holy site, which had been in pathetic condition when he first visited it in 1982.

“These temples are not just worship places but also tourist spots,” he added, noting the scenic value of the area (Salt Range).

Over the summer a Sikh acquaintance from New York was telling me how his grandfather Jagtar Satia’s dying wish was to be buried in Pakistan. When he tried to bring his grandfather’s ashes to Pakistan, the embassy refused him a visa. The family laid him to rest in New York but the sadness and disappointment with which he told me this story made me feel so bad as I have watched my own maternal grandparents yearning for the land and life of Srinagar.

So I promised I would have a funeral ceremony for his grandfather in the Gurdwara in Lahore. And then I came back to Lahore and life took over…. But finally, this Sunday it happened. Saba Gul, Abbas Akhtar and I went to the Gurdwara Dera Sahib next to Badshahi mosque and held a funeral ceremony for him. The Gurdwara in Lahore is one of the three holiest Sikh places in the world (all three are in Pakistan). We recorded the ceremony for my friend and his family but I wanted to share our experience as it is a part of Pakistan most of us rarely get to see. I got really lucky because the head of the Gurdwara was there and he conducted the ceremony.