Brilliant comeback by Pakistan women in thriller against India 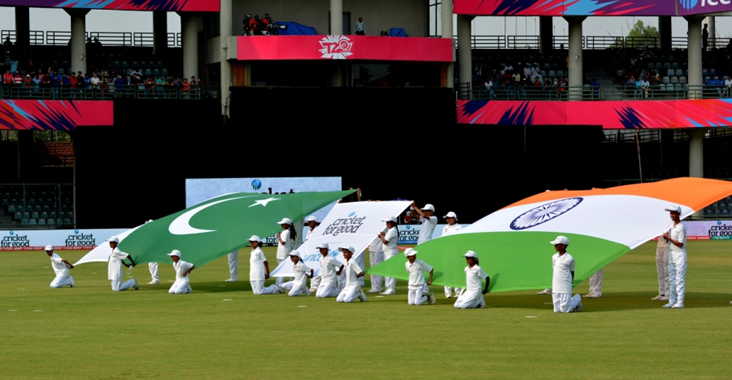 In a double header televised match, the Pakistan women’s cricket team took on India in Feroz Shah Kotla stadium in Delhi while their male counterparts took on the Men in Blue at Eden Gardens, Kolkatta.

The Pakistan women’s team captain Sana Mir won the toss and put India to bat. With more spin alternating with pace attack the Pakistan women did what they are good at – bowled well. Tthe Indian side struggled to put runs on board. With sharp fielding, run-outs and not a catch dropped, the Pakistani women were able to restrict the girls in blue to 96 for 7. Anam Amin and Asmavia Iqbal each took a wicket in their first spell, reducing India to 2 for 5 in 3.3 overs. Spinners Sadia Yousaf, Nida Dar and skipper Sana Mir scalped a wicket each while Asmavia Iqbal affected two run-outs.

Nahida Khan sweeps it for a boundary

A score of 80 plus runs seemed farfetched for India with regular wickets and not many runs coming by. It was only after 14th over that a fiery 24 came from Veda Krishnamurthy, who hit three fours in her 19-ball inning while Jhulan Goswami and Shikha Pandey put up 24 runs and took India to a decent 96.

Muneeba Ali has a narrow escape

Even while batting, team Pakistan took India by surprise as Nahida Khan picked up 9 runs in the very first over. Pakistan lost wickets and it was boundaries and singles coming from Sidra Amin, Iram Javed and Muneeba Ali which literally put the match in Pakistan’s hand. A stunning catch by Mithali Raj of Iram Javed followed by two run-outs put a brake to the runs as Pakistan went from 4-71 to 6 -77 in 16th over, losing a quick three wickets in just 9 balls. Panic did seem to set – in the dugout with successive wickets.

Pakistan found itself at a better position with a two-run lead on India after 16 overs when a sudden downpour stopped the match. Pakistan was declared winners by the DL method. Anam Amin was declared as the player of the match for the second consecutive time.

Meanwhile in the men’s match between India and Pakistan, the men in blue stole the show.

Skipper Sana Mir dedicated this win to all those parents who have encouraged and supported their daughters in sports and games.

Update: The Pakistan women’s team won by 34 runs against Bangladesh on 24 March at Feroz Shah Kotla Stadium, Delhi. They play against England on 27 March at M. A. Chidambaram Stadium in Chennai.

Abhilasha Agrawal is an educationist from Vadodara, India and runs Winsports to promote her passion for women in cricket. This is her second time photographing the women’s teams playing the T20 World Cup. Email: [email protected]

With significant support, Pakistan 'feel at home' in Mohali Neutralising the enemy within