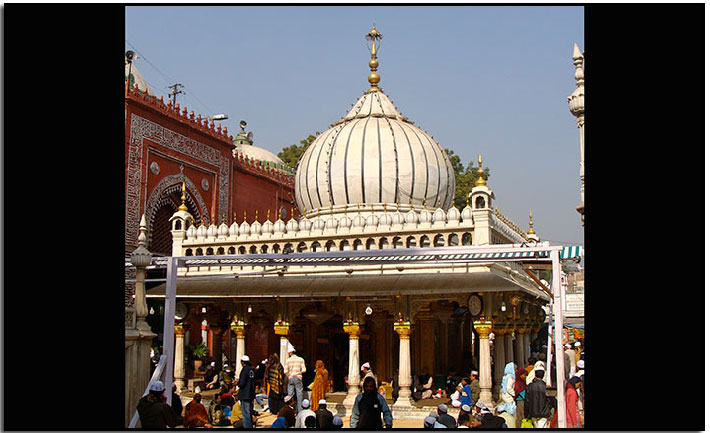 The dargah of Nizamuddin Auliya: A rich legacy

At what point in the life and history of a city does one start to chronicle its story? Especially in the case of a city like Delhi, with its multi-layered history and multiple pasts? And where does one choose to locate one’s story? Raza Rumi, the Pakistani author of Delhi by heart asks himself these questions at the beginning of his book, trying to make sense of his long-time desire to visit and explore Delhi:

“Standing on the other side of history, it was not clear to me where I wanted to be. To reach Delhi, the threshold of twenty-two Sufis or to discover the ground where Indraprastha was built? Or was it a journey into the seat of the Islamicate that ruled India for no less than a thousand years?”

Rumi’s animating force probably lies in his own personal history, in the story of his forefathers, who en route to Benaras from Lahore, sought shelter in the khanqah of a Sufi mystic, Shah Shams, and gained acquaintance of a new faith.

Not unsurprisingly, he chooses to begin his story from the basti (settlement) of Nizamuddin in Delhi which houses, among other things, the dargah-complex of the influential Sufi Chishtiya saint Nizamuddin Auliya. This represents the place and time in Delhi’s historical, cultural and spiritual timeline that made Delhi quintessentially what it came to be known for and for its rich legacy: a cuisine (Mughlai), a language (Urdu), music (Qawwali), poetry and a Sufi grounding.

For Rumi, significantly, the feeling that he is an outsider in Delhi “bites the dust as the magic of the place uncannily makes me feel at home”. The area opposite the basti, Nizamuddin East, is also his “miniature vision of Delhi which refuses to go away.”

As it turns out, Rumi’s story is quite solidly rooted within a Delhi that is indeed the ‘threshold of twenty-two Sufis,’ and a Delhi that was the ‘seat of the Islamicate.’ He gives a brief account of a visit to Purana Quila in the early part of the book – “a landmark of ancient Delhi,” supposedly on the site of the city of Indraprastha that figures in the Indian epic Mahabharata. But the site does not do much for him: “I try to imagine King Yudhisthira but cannot conjure up a figure…I resolve to find out more”.

Rumi with the iconic poet and writer Gulzar

His sustained explorations of Delhi lead him to focus on three centres, as it were – to delve into and construct his story from. The first is, of course, the Nizamuddin area that saw the efflorescence of a hybrid Indian culture including a language that sought to bridge the tongues of the rulers – Turkic, Persian, Arabic – with native dialects. There is the Mehrauli area, in south Delhi, which has its own past, pre-Muslim and pre-Mughal, home to several monuments from the Sultanate period of Delhi. Last, but certainly not the least, is Shahjahanabad, the area around the Red Fort, today referred to as Old Delhi.

It is in this erstwhile seat of Mughal grandeur and culture, built by Mughal emperor Shah Jahan, that the author seeks out the stories of power, cosmopolitan cultures and of traditions of poetry as represented by illustrious names like Dara Shikoh, Bahadur Shah Zafar, Sarmad Shaheed and of course, Ghalib.

It is in the warren of Old Delhi’s lanes – the “kuchas, galis and katras” – in a modern-day decaying heritage of Delhi that Rumi lovingly tries to resurrect the many hidden treasures and forgotten tales and traditions that were witness to more august times:

“Once upon a time the gullies and kuchas of Shahjahanabad must have echoed with stories of dastangohs or storytellers,” he writes, almost wistfully.

Raza Rumi with the legendary Dilli-wala Khushwant Singh, who left his heart in Lahore

Rumi’s concerns run deeper than merely excavating old stories and monuments – he also endeavours to straighten various national narratives and official versions of histories, the “textbook nationalism” he mentions in the Preface he was born into.

“India, Pakistan and their shared histories, three characters that always accompany me in Delhi”, says Rumi. Going about this task, he often lapses into more modern historical side-notes about the political trajectories that led to the partition into two nations (and eventually, three).

He also brings great patience, understanding and generosity in trying to understand modern India’s many contradictions, including the social and economic status of Muslims and Dalits, weaving them into his larger story quite seamlessly.

His prose is shorn of ornamentation and flows smoothly. Rumi is as self-effacing an author as one can get, often backgrounding the various obstacles and disappointments he faces, whether bureaucratic or as the witness to the general neglect that Delhi’s illustrious past is met with.

Towards the end of his book Rumi wonders “why there is a relative paucity of books and stories on Delhi since Delhi is no ordinary city’. As he notes, “there is much in contemporary Delhi that has not been documented”.

Maybe “contemporary Delhi” is being documented through media other than books, via gritty films like Oye Lucky Oye, Vicky Donor and Khosla Ka Ghosla, which try to capture the ethos and aspirations of the new Delhi. One of Delhi’s more recent and admired chroniclers, fortuitously going by the name Mayank Austen Soofi, adopted the modern medium of a blog (“The Delhi Walla“) to document his peregrinations in Delhi.

Soofi, whose blog was very often about some dargah or forgotten monument of Delhi, in a recent interview talked about his primary concerns, less with buildings or old things than “the people, the dogs, the cats, the city’s inhabitants”. The historical structures are “all just a prop”, he holds.

Interestingly, another of Soofi’s blogs is titled “Pakistan Paindabad” – Long Live Pakistan. The love and admiration on both sides of the border seems mutual.

Rumi makes no bones about where his heart lies. He clearly writes with his heart, trying to uncover, discover and come to terms with centuries of culture and beauty that Delhi engendered and gifted to the world.

Most of all, his accounts of Delhi, narrated with genuine caring and appreciation, consolidate his hope – and appeal –  in the Preface, “to transcend boundaries…and reject the ills of jingoism spun by nation-state narratives.” While appreciative of mixed cultural heritages and exemplars emerging from Delhi’s encounter with its Sultanate and Mughal eras, Rumi seeks answers in them to the ugly forms of sectarian extremism that the region has seen in the recent past.

Currently living in Boston, Umang Kumar has family and educational ties with Delhi. He loves to wander the galis, kuchas and katras of Old Delhi when visiting India, especially the Sunday book bazar in Daryaganj..