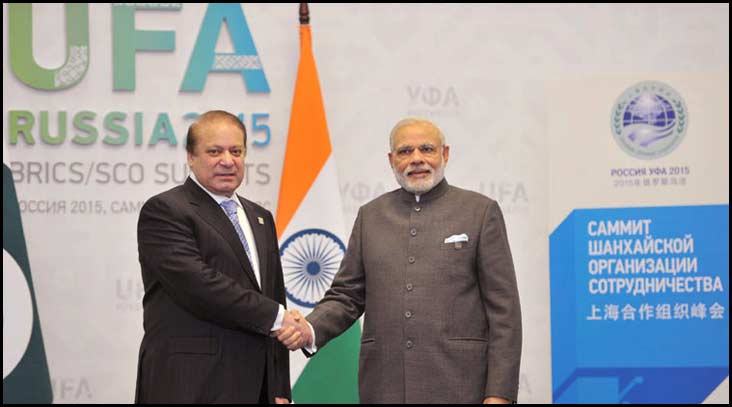 On the sidelines of Ufa… India and Pakistan: please keep talking. PTI photo

The decision of the Prime Ministers of India and Pakistan, Narendra Modi and Nawaz Sharif in their recent joint statement announcing the release of each other’s imprisoned fishermen has been hailed as “timely” and much needed.

Hailing the prime ministers’ agreement to release the Indian fishermen held in Pakistan jails within a period of two weeks and also repatriate Pakistani fishermen held in Indian prisons, the South Asians for Human Rights (SAHR) noted that thousands have been arrested at the borders or while fishing in the deep sea. SAHR also called upon the governments of India and Pakistan to find “a joint and lasting solution” to resolve this ongoing issue.

Many other groups including the Pakistan India People’s Forum for Peace and Democracy (PIPFP) have also made this appeal while also urging the governments to adopt a “no-arrest policy” for fishermen who stray across the maritime border.

“Issues of terrorism, religious extremism, sectarian violence and communalization are major threats to peace, democratic development and security in India and Pakistan as well as in South Asia,” noted SAHR.

The organization emphasized that “state responses to terrorism which have not respected human rights, have contributed to insecurity, instability, militarization and encourage impunity for intelligence agencies and security forces.”

SAHR also called upon the governments of India and Pakistan to build upon this meeting of Prime Ministers held on the sidelines of the Shanghai Cooperation Organisation Summit on July 10. Both countries must establish peaceful relations and continue dialogue and discussions to seek ways for non-violent resolutions, urged the statement.

“Further, severe visa regulations have become an impediment to the free movement of people between India and Pakistan,” said the SAHR statement issued on behalf of the members of South Asians for Human Rights.

The statement, signed by prominent advocates Hina Jilani and Dr. Nimalka Fernando, Chairperson and Co-Chairperson of SAHR respectively urged the governments of India and Pakistan “to work towards mutual cooperation and in addressing visa restrictions and promote the facilitation of free movement of people between the two countries.”

These views are echoed by millions in the region.

Point of view: The India-Pakistan treadmill Eid prayers for peace: Reflections on "Celebrating Days for Peace" and an appeal