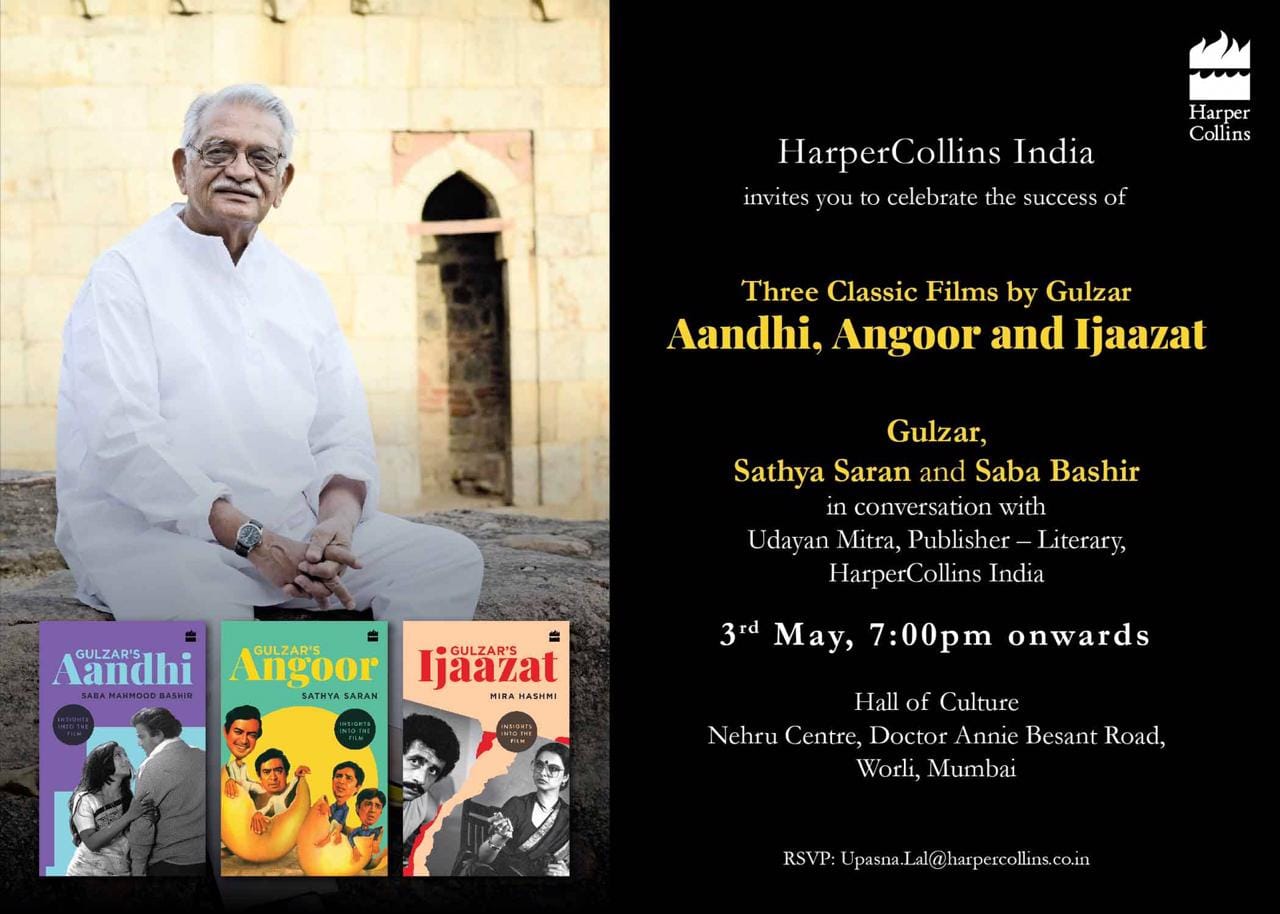 Aandhi, Angoor, and Ijaazat – the titles of three classical films by the great writer, poet and filmmaker Gulzar – are now the subject of a trilogy just published by HarperCollins India. Two of the writers, Sathya Saran and Saba Bashir, are from India. It is fitting that the author of the third, “Gulzar’s Ijaazat” is Mira Hashmi from Lahore, Pakistan.

Gulzar has consistently and openly called for peace and good relations between the two countries, and expressed his longing to freely visit Pakistan, where his birthplace and beloved native village Dina lie, not far from Lahore.

The book launch at the Nehru Centre in Mumbai on 3 May 2019 included a discussion with the authors and Gulzar, moderated by Udayan Mitra of HarperCollins India. Unfortunately, ongoing tensions between India and Pakistan precluded Hashmi from obtaining a visa and attending the launch.

From her home in Lahore, Mira Hashmi recorded a brief video for the event at the organiser’s request. Reading out her written statement in Urdu, she movingly recounts how she traveled to Mumbai in the monsoon season of 2015 to meet with Gulzar and spend a few hours with him.

How the opportunity came her way, she doesn’t know – perhaps the desire buried deep in her heart reached the ears of some god or goddess. She shares the magic that Mumbai has always held for her, and her great sadness at not being present at the event. The only granddaughter of the great poet Faiz Ahmed Faiz clearly also has a poetic streak.

“How strange it is, that as the world gets smaller, distances between us are increasing”, she muses. And perhaps, she suggests, there are some among us who have got addicted to proving their supremacy over the other. She comforts herself with the reminder that one gets angry with those one feels closest to – and “all of you are after all, my own people”

Gulzar made Ijaazat in 1987, a film about lost love and a broken marriage, at a time when action-packed potboilers had replaced the genteel romanticism of yore. Hashmi’s book, available on Amazon, explores why the film continues to endure.

Gulzar’s interpretation of a love triangle in Ijaazat was an evocative exploration of the strength and fragility of human relationships, years ahead of its time. Hashmi’s book “examines that interpretation to show how, thematically, the film was possibly Gulzar’s most daring. It highlights how his skill as a storyteller at once romantic and realistic is exemplified by his complex characters. Contributing to that understanding is how the film s power also derived hugely from its sublime musical score by R.D. Burman. Drawing on Gulzar’s recollections of the making of the film, Mira Hashmi’s book embraces the memory of the love that for the poet wasn’t always the answer, but a part of the question”.

An assistant professor teaching film studies at the Lahore School of Economics, Mira Hashmi has a lifelong passion for cinema. She is a graduate of the Mel Hoppenheim School of Cinema at Concordia University in Montreal and has written about film for various publications for over 25 years, starting with The Frontier Post, Lahore, when she was still a schoolgirl.