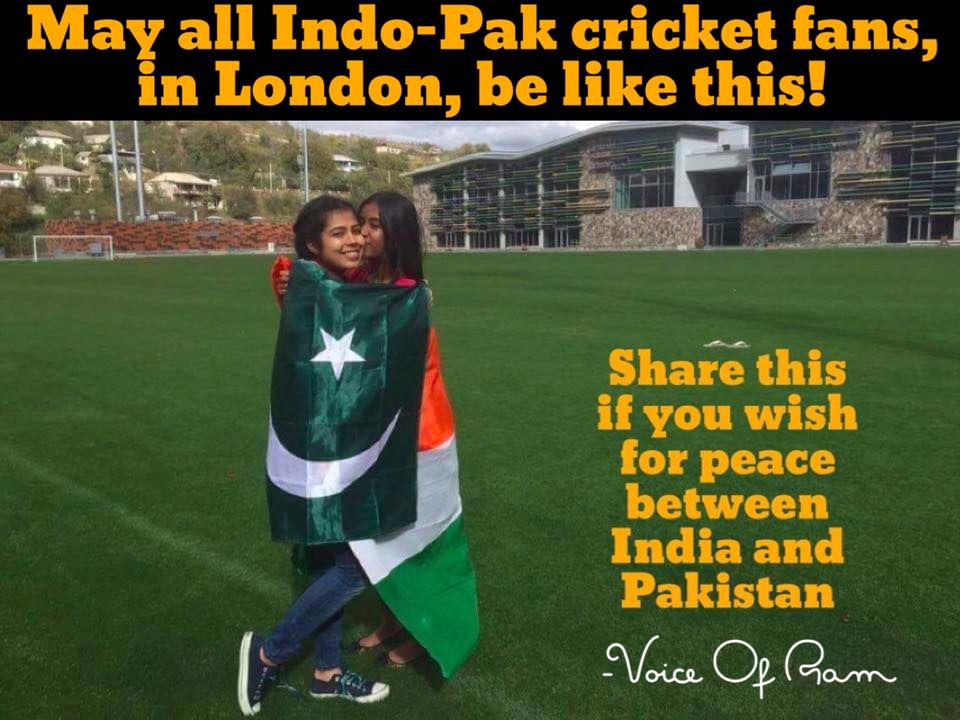 “It’s just a game” doesn’t apply to any cricket match between India and Pakistan. But in recent years, fans have been stepping beyond national positions to support the other team even while rooting for their own, and to point out that yes, it is just a game. And that it’s better to fight on a sports ground than the battlefield.

Last year, after Facebook launched a feature for the T20 World Cup allowing users to change their profile picture frame to support their favourite team, many Indian and Pakistani cricket fans swapped cricket team colours on their Facebook profile pictures in a hat tip to the #ProfileForPeace campaign catalysed by Mumbai-based ad-man Ram Subramanian.

In Cricket crazy “peace entrepreneurs” bringing down the wall using #ProfileforPeace again, a blogpost for Aman ki Asha, IT entrepreneur and peace activist Samir Gupta explained how it started, when he saw his Pakistani Facebook friend Nudrrat Khwaja post the Indian team colours on her profile picutre — “making a public statement that just bowled me over”, he wrote. “I decided to join her and changed my profile picture to support the Pakistan cricket team. Within twelve hours, I saw dozens of Pakistani Facebook friends changing their profile picture to support the Indian cricket team”.

Subramanian’s Voice of Ram Facebook page has produced some powerful peace material that resonates across borders. A recent photo shows two girls wrapped in India and Pakistan flags with the caption: “May all Indo-Pak cricket fans, in London, be like this”.

And even as media hype against the ‘other’ continues, fans are warming to the photo going viral of former Indian captain Mahendra Singh Dhoni gently cradling four-month old Abdullah, son of the Pakistan captain Sarfaraz Ahmed.

According to the Asian Age, Dhoni met Sarfraz, his wife Khushbakht, and their four-month-old son Abdullah after beating Bangladesh in Birmingham. The photo, taken in the lobby of a hotel, was shared by Sarfraz’s India-based mama (uncle), Mehboob Hassan.

A nice pic ahead of the Champions Trophy finals. @msdhoni with Sarfraz Ahmed baby: sports beyond boundaries!! #IndVsPak pic.twitter.com/8WNAlHzf4B

A couple of days ago, when Sarfaraz Ahmed was being trolled for his obvious nervousness about there being only “English-wallay” reporters at a press conference, the most support and heartwarming response for him came from Indians. Similarly, former Pakistan captain Amir Sohail’s snide remarks downplaying the current team’s win against favourites England to reach the ICC final drew a storm of protest from cricket fans rising to Sarfaraz Ahmed’s defence, most notably former captain Saurav Ganguly and Harbajan Singh.

The focus on cricket has overshadowed another India-Pakistan game also being played in London on Sunday, the Hockey World League.

Another video being widely shared is this one by Voice of Ram: “Cricket will bring us closer! A message to all Indians and Pakistans who will watch the Sunday cricket finals!”

Namaste Pakistan! Why pray for your neighbour’s peace and wellbeing?