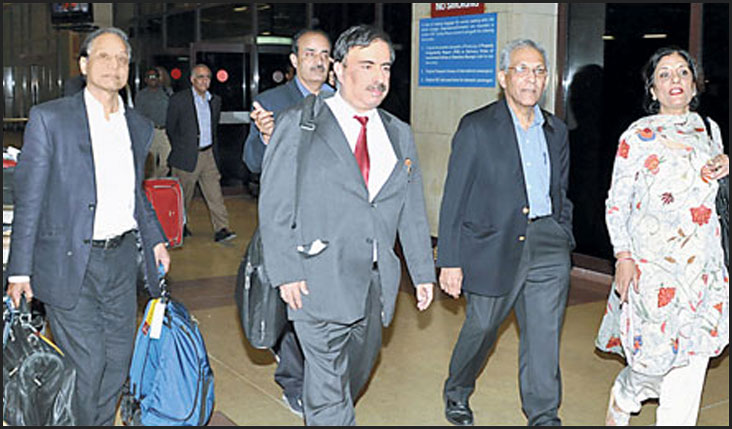 By Rabia Ali and Saad Hasan

Karachi: A group of Indian notables arrived here on Monday to participate in a two-day strategic dialogue on Indo-Pak relations with optimism that people on both sides of the border want lasting peace and stability in the region.

The dialogue, which starts from today (Tuesday), is being organised under the aegis of Aman Ki Asha, a joint initiative of The Times of India and the Jang Group, to let the intelligentsia and civil society have a say in matters of foreign policy.

“Ultimately, the governments on both sides need to strive for a real change in relations,” said Salman Haider, former Indian foreign secretary. “But the people and private sector can help create a suitable environment for such official decisions.”

Mutual discussions can help in changing perceptions and making it easier for the government to take difficult steps, he said. “The bus service between Srinagar and Muzaffarabad is a prime example of the success of non-official discussions.”

Haider said that most significantly the two countries had reached a stage where economic ties would expand in any case. “The trade relationship is a very important factor, which is usually not realised.”

India and China have been at loggerheads over territorial issues for decades yet economic cooperation has expanded tremendously between them over the last twenty years, he said. “Issues are still there but that has not deterred business.”

The important lesson to be learned from the events, which led to the formation of the European Union, is that unnecessary bloodshed needed to be avoided, he said. “Animosity still remains between England and France, between the United States and Canada. Yet, their mutual interests superseded all that.”

Ravi Dhariwal, the CEO of The Times of India, said that Indo-Pak relations had seen an improvement in the last few months with visa procedures being relaxed. “Well, the two media houses can’t claim the credit for this but surely Aman Ki Asha has started the movement.”

Civil society can make it easier for the bureaucrats and politicians to take tough decisions, according to him. “I remember when Aman Ki Asha was launched. Even in the heat of the Mumbai attacks, we received a call from the prime minister’s office saying it was a good initiative.”

He said that the first advertisement for Aman Ki Asha published in The Times of India was bold. “I saw it and said ‘oh this is too bold’. I though it over for an hour and asked my team to tone it down. But they refused and I had to agree.”

The initiative was not easy as a lot of people also criticised the Indian paper for improving ties with Pakistan, which is seen by many as an act tantamount to supporting terrorists, he said.

Radha Kumar, who is currently the director of the Mandela Centre for Peace and Conflict Resolution at the Jamia Millia Islamia University, first came to Karachi in 1979.

“I came here as a young feminist looking for sister feminists,” she smiles and adds: And I found them.”

Also here for the Aman Ki Asha conference, she believes that peace is important between the two nations for “so many reasons”. Be it economic, political or social, Kumar believes that it is better for both the countries to live in peace and harmony.

She says that after independence, relations were cordial, but hostility increased after the 1965 war. “There is a huge distrust between the militaries of the two countries, and efforts should be made to allay their fears.”

Former chief of the Research and Analysis Wing (RAW) and former special director of the Intelligence Bureau, AS Dulat, says that meeting one another is important for the two peoples. “I am overwhelmed by the hospitality, and it amazes me each time I come here.”

Dulat said that the Aman Ki Asha initiative involved parliamentarians and former government officials to take part in the peace process. “These people have influence and to make them part of this process is a considerable effort.”

He says that there has been enough tension between the two countries that peace has become extremely important now. “There has been so much stress in the past. We need harmony now.”

Sushobha Barve, Director of Centre of Dialogue and Reconciliation, says that people back home believe that if being friends with Pakistan will help develop ties, then India should be friends.

She said that after the 26/11 incident, some people said that they now understand what Pakistani families go through when facing terrorism.

“The government should allow people to meet and share experiences. People want to meet, as hundreds and thousands want to know what it is like to be on the other side of the border.” From her first visit to Karachi in 1986, Barve remembers visiting Orangi and meeting Akhtar Hameed Khan, the founder of the Orangi Pilot Project. She also remembers going to Nasra School and the historic city of Moenjodaro.

“There should be a movement for the people at the grassroots level as it is important to involve the people. During the mid- 1980s, there was a Pakistan India Forum for Peace and Democracy, which held conventions in both the countries. We need those kinds of movements again.”

Dr Ajay Darshan Behera, Associate Professor at the Jamia Millia Islamia, said that ordinary Indians and Pakistanis have not been allowed to interact despite many similarities between their respective living environments.

“If we leave it to the government to decide the fate of Indo-Pak relations, it will take its own path,” he said. “The intelligentsia from both sides has been meeting for a long time but not in their own settings, which reflects the realities.”

He said that the extent to which Pakistanis and Indians know about each other matters a lot. “The culture, the life of lower and middle class people, their behaviour – it is all this that helps bring the countries together.”