Let ‘health’ be our common wealth 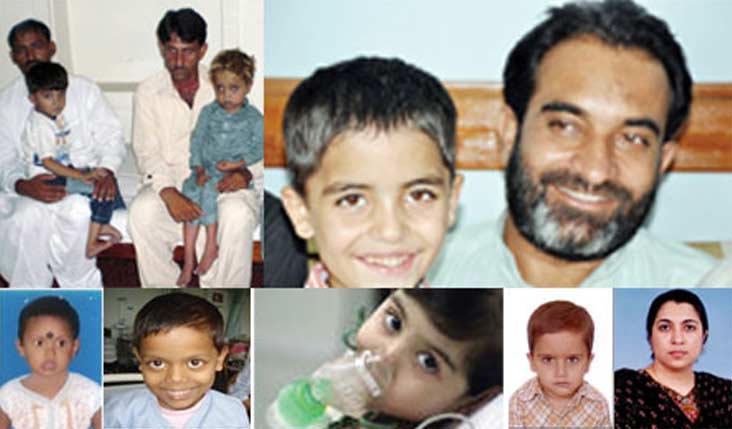 The overwhelming outpouring of love and support for Pakistani baby Noor Fatima, operated upon in India in 2003, underlined the need for medical cooperation and people-to-people contacts.

The Confederation of Indian Industry (CII) some time back recommended promoting economic cooperation between India and Pakistan by focusing on information technology (IT), entertainment and healthcare.

After all the other two are thriving and will take care of themselves. I remember in the mid-nineties, when my father-in-law, a doctor himself, was diagnosed with a serious medical problem. Frantic tests at various local institutions recommended that he undergo a procedure that wasn’t very commonly performed in Pakistan. He was all set to go to the west which required large expenses.

It was then that my awareness about a particular institution in India, where I had grown up and attended medical college, came in handy. I persuaded him to get examined there. We went to New Delhi, and he returned to Pakistan treated at one tenth of the cost it would have required in the west. I became an instant ‘doted’ upon daughter-in-law in his eyes. All his initial reservations about his son marrying an Indian disappeared overnight.

The true potential of medical cooperation between the two countries was dramatically highlighted when Noor Fatima, a two-and-a-half year old baby girl, went to Bangalore by the Lahore-Delhi bus in 2003. In fact, the bus service was resumed in part to allow her to make the journey. She was literally given a red carpet at the hospital as well as by the media.

Just a few days ago there was news of a 10 month old baby being taken from as far away as Qila Abdullah near Chaman in Balochistan to Bangalore, India for a heart surgery, a free treatment thanks to the joint efforts of Rotary India Humanity Foundation (RIHF) and Rotary Pakistan with Aman ki Asha, the peace initiative of the Jang Group of Pakistan and the Times of India Group. It is heartening to know that thanks to this rightly named ‘Heart to Heart’ initiative, now over 60 Indian and Pakistani children from poor families have been able to undergo life-saving heart surgeries in India.

As this people-to-people interaction in health, as in other fields, goes on, it is clear that no animosity or cold temperatures at the top level can freeze the warm relations between the ordinary Pakistanis and Indians. Our common heritage, common interests and above all a concern for each other will never dampen this warmth.

However, there is a dire need to extend this at a wider and higher level. The recent statements from the Indian and Pakistani business communities could well be the trigger. The top levels of the corridors of power need to formulate policy along these lines to bring a real impact at community level.

With reports about a case of Polio being found recently at Wagah, Pakistan, it becomes essential for strong policy decisions to be made at the top level, trickling down to the masses, to combat the spread of such crippling diseases.

India and Pakistan are among the four countries of the world where Polio is endemic. Our proximity will not enable either to achieve the ambitious plan of making Polio extinct, without mutual cooperation.

Looking at both countries from the UN lens, India and Pakistan are both termed ‘out of track’ when it comes to achieving the 2015 target for the Millennium Development Goal (MDG) 4 – the reduction of infant mortality. With a 1.4 billion population in the region, this means millions of children and babies are at risk. Failing to achieve an optimal Infant Mortality Rate will mean that a gigantic number of children being deprived of the opportunity to survive. Does that not warrant a joint concerted effort for both countries to come ‘on track’?

Similarly, in the MDG 5, the reduction of the Maternal Mortality Rate, again, both the countries are unlikely to meet the target in 2015. India has done better, but in both countries, far too many women die during childbirth. We certainly have great room for cooperation in this field too, as overpopulation, women’s illiteracy, and violence against women are among the common problems that both countries face. Isn’t it common sense to share information and experiences and work together to eradicate these problems?

MDG 6 deals with the Infectious diseases, like Tuberculosis, Malaria and HIV. India has done a good job in stabilising HIV, bringing down the prevalence rate from 0.36% in 2006 to 0.31% in 2009 (UNAIDS Global report on HIV/AIDS, 2010). In Pakistan the HIV/AIDS prevalence is low among the general population (<0.05%), but according to UN reports, it is increasing rapidly in high risk groups. The UN categorises Pakistan as a high risk country for the spread of HIV/AIDS. (http://bit.ly/UNmdg-mm).

Doesn’t it make sense for Pakistanis dealing with HIV/AIDS control to learn from India’s experience? Isn’t prevention better than cure?

Malaria is still a problem that both countries have not been able to tackle. According to a recent World Health Organisation (WHO) report, a third of the world’s countries will manage to eliminate Malaria, but adds that “the future in the South Asia region isn’t bright.”

India battles with a heavy burden of Malaria. Pakistan too has almost half a million cases of Malaria each year. A common problem with a common purpose of defeating it could help the region also realise the dream of being Malaria free. After all, countries closer to home like the Maldives have managed to do that, and Sri Lanka is considered close to eliminating the menace.

The mid-2000s saw Dengue epidemics in the Indian cities of Delhi and others in northern India. Today, Lahore and others in Pakistan are battling with it. It was a proud moment for the region when expertise from Sri Lanka and medicines from India helped Pakistan to combat the illness.

We have no choice but to combat such problems through joint efforts. The border security guards can check humans for visa, but mosquitoes are above such restrictions.

But besides the recent Dengue cooperation, there has hardly been any cooperation in the field of health at the top policy-making level. The only other cooperation worth a mention is the Polio drops being given to under-fives at Wagah border, and the fumigation of the Samjhota Express against the H1N1 flu virus.

Such small examples of cooperation are nothing compared to the gigantic cooperation that takes place in the field of entertainment. It is much more critical to come together on the immensely more serious issue of health. The stalwarts in this field must emulate the entertainment sector towards substantial cooperation.

We have a common geography, ecology, genetics, cultural practices and health problems. I am sure we can find common solutions too, that will save both countries much valuable time and money. United in health we shall stand, divided we shall fall with illnesses.

Dr Ilmana Fasih is an Indian gynaecologist and health activist married to a Pakistani.
Blog: Blind to Bounds http://thinkloud65.wordpress.com/
Other children who have also been given a second chance through AKA-Rotary’s Heart to Heart initiative