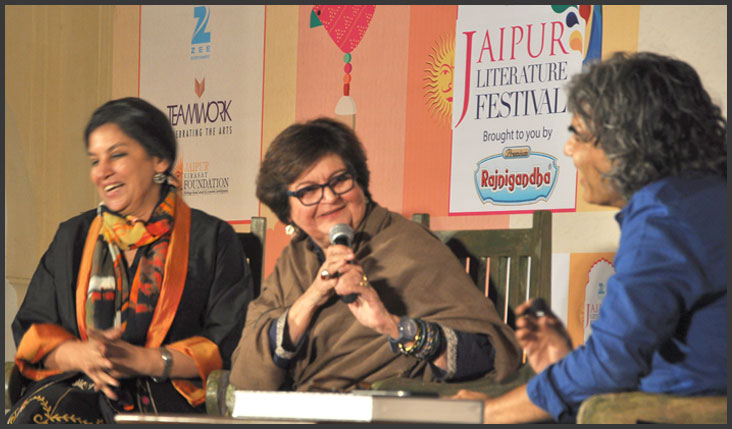 Literature festivals on both sides of the border draw similar crowds. The best part is they bring at least some Indians and Pakistanis together
By Sehyr Mirza

When the bus from Delhi reaches the inter-state bus terminal in Jaipur at the crack of dawn, the sky is still dark. We are struck by the name of the terminal — Sindhi Camp. The name has stuck decades after the refugees from Sindh in the new country of Pakistan settled there after migrating in 1947.

My friend Simran and I haul our bags into the back of a taxicab and head to the venue of the Jaipur Literary Festival (Jan 21-25), traversing empty streets in the yet sleeping city. It’s pleasantly breezy on an early January morning. With a few hours to spare before the Festival begins, we wait it out at a café.

As the sun climbs up the horizon, the darkness trails away. Blazing daylight reveals a touch of royalty in the magnificent Pink City. The roads are soon densely crowded. People from all corners of the world throng Jaipur for the festival known commonly as JLF.

Sessions comprising readings, performances, discussions and questions and answers are held in huge tents erected on the sprawling lawns with splendid names like Char Baagh, Rajnigandha Front Lawn, Samvad, Mughal Tent and Darbar Hall. From food to handicrafts, books to music CDs, souvenirs to arts and craft, a range of enticing stalls sells just about everything. Bibliophiles from across the country and abroad stand in long queues waiting to buy the authors’ books.

This year, themes running across JLF include topics like Literature in Cinema, Mythology, Poetic Imagination, Aesthetics and Art, Women Uninterrupted and the Seven Deadly Sins.

Providing an eclectic space for some of the world’s finest authors, thinkers, artists, journalists and celebrities, the festival bridges cultural, geographical and historical divides. And yet again it brings India and Pakistan together amid the continued political tensions.

An aspiration expressed: Sehyr and Simran at JLF

A session dedicated to the iconic Pakistani poet Faiz Ahmed Faiz and the much acclaimed Indian poet Kaifi Azmi titled “Faiz and Kaifi: A Poetic Legacy” features the Indian film actress and activist Shabana Azmi with Pakistan’s renowned painter and activist Salima Hashmi. The session draws a huge, enthusiastic crowd. Many people opt to stand or sit on the ground to hear the dialogue between these two leading women of the subcontinent. Shabana Azmi and Salima Hashmi discuss their celebrated fathers and their poetry along with nostalgic anecdotes incorporating music and memories.

Former Pakistani foreign minister Khurshid Kasuri and acclaimed Pakistani journalist and best-selling foreign policy author Ahmed Rashid participate in a session titled “Descent into Chaos: Pakistan on the Brink” along with Indian diplomat G. Parthasarthy and Anatol Lieven. The panel discussion focuses on relations between India, Pakistan and Afghanistan. While Kasuri seems optimistic about improving bilateral ties with India, G. Parthasarthy calls for a halt in cross-border firing to ensure a successful dialogue. Ahmed Rashid points out that both India’s neighbours had been passing through tough times in the recent times.

Pakistani writer Bilal Tanweer, author of The Scatter Here Is Too Great, shares the stage with Indian poet and Urdu critic S.R. Faruqi in a conversation about Urdu poetry, moderated by Delhi based poet and academic Sukrita Paul Kumar at the Baithak.

The partition of India, India-Pakistan relations, and the ongoing current political crisis in Pakistan come up for discussions in several sessions at JLF. In an outstanding session at the front lawn Urvashi Butalia, the author of the ground breaking partition account of women’s voices The Other Side of Silence in conversation with human rights activist and journalist Salil Tripathi talks about the poor state of women in both India and Pakistan. Views are also exchanged about freedom of expression and forms of self-censorship and social taboos inherent in all forms of public speech and writing in South Asia.

For Faiz and Kaifi Azmi: a packed hall. Photo: JLF

A session titled ‘The Devil’s advocate: Ram Jethmalani’ is a major crowd puller at JLF, featuring the senior lawyer and politician Ram Jethmalani, along with author Shobhaa De and journalist Madhu Trehan.

Jethmalani talks about how he managed to become a lawyer at age 18 when the minimum age for becoming a lawyer was 21. A resolution was introduced after his appeal to the legal system, which allowed him enrolment. Now a sprightly 92, he holds the audience rapt with his wit and incisiveness. Speaking about the title of the session, he remarks that between God and Devil, he has more respect for Devil. After the massacre of school children in Peshawar, he is convinced that God doesn’t exist. His comments are followed by thunderous applause.

Jethmalani also talks about his pre-Partition childhood in Karachi, where there was a wonderful synthesis of Islam and Hinduism. “Muslims would buy new clothes on Diwali and Hindus would buy new clothes on Eid.” He practiced law in Sindh for six years. His family migrated to India when riots erupted in Sindh in February 1948, and he sorrowfully parted with his Muslim friends. He has been in touch with one of them through telephone and letters. His family had to live in refugee camps suffering from severe poverty and starvation. “I swore that my family would never be poor again.”

I later have the chance to chat informally, at different occasions, with Shabana Azmi, Shobhaa De and filmmaker Vishal Bhardwaj about the need for peace between India and Pakistan.

Peace making shouldn’t be limited to artists and activists, says Shabana Azmi. Every individual in India and Pakistan is responsible for making peace efforts to strengthen ties between the two countries.

The day will come when there will be peace between the two countries, believes Vishal Bhardwaj. He is confident of this “because the people on both sides are the same”.

Shobhaa De stresses the importance of cultural and student exchange programs to foster mutual understanding and bridge the gap between people of both nations.

After a brief stay in Mumbai, I return to Lahore in time to participate in the Lahore Literary Festival (LLF), Feb 20-22. I see the same festive atmosphere in Lahore as in Jaipur but on a slightly smaller scale. Participants at both festivals cut across generation and class, with not only the youth but people from all age groups participating.

I am also struck by the similarity of those on both sides for whom literature seems to hold little appeal than either engaging in trivial debates or clicking selfies. However, there is also a visible renewed interest in purchasing novels, short stories and poetry collections in regional or international languages, that reflects a positive change in the reading habits.

Since the first JLF in 2006, many cities across South Asia have started their own literary festivals or lit fests in Bangladesh, Nepal and Pakistan. In Lahore this year, there is a plethora of speakers from India, including celebrities like actor Naseerudin Shah, historian Romila Thapar, and journalists like Rahul Singh, Shekhar Gupta and Naresh Fernandes.

When I briefly speak to Shekhar Gupta after his session on “Anticipating Peace: India and Pakistan”, he shares some anecdotes about how pleasant his experience of visiting Pakistan over the years has been. Naresh Fernandes says he is “lost in the beauty of Lahore”.

Kashmiri writer Basharat Peer remarks that the high point for him was to be on a panel with three writers whose work he has immense respect for-the graphic journalist, Joe Sacco, the graphic artist, the Egyptian writer Yasmine El Rashidi, and the Sri Lankan novelist Romesh Gunasekara.

“It was inspiring to get to know them and speak about the craft, the challenges, and the ways of writing about societies in torment,” he says. “Being part of the LLF is a sheer delight!”

Some criticise such literary festivals for their reverence to intellectual elite, little to no contribution towards promoting the works of indigenous writers, and sometimes drawing a more general audience than passionate lovers of literature. However, those are minor critiques compared to their positive contributions. And one thing is for sure: that these festivals are opening new avenues of hope by connecting people from India and Pakistan, even if this connection is limited to writers and intellectuals.