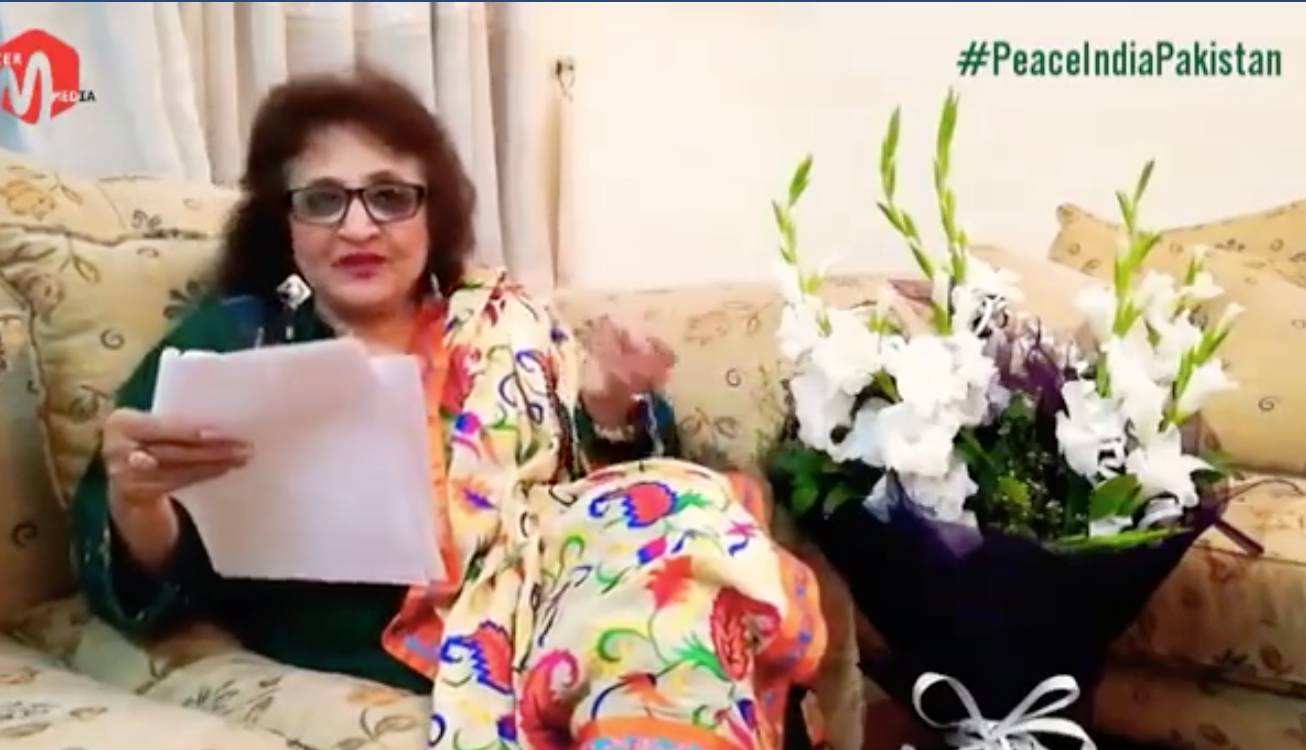 As tensions between India and Pakistan soared after the Pulawama attack, a Punjabi writer was moved to pen a poem that her actor sisters took up. Their “Gwandne” (neighbours) music video went viral

A catchy music video on the India-Pakistan tensions that has gone viral combines the power of women, poetry, music and dance. Behind it lies the story of a courageous and talented family of writers, singers and actors with a history of fighting for peace, against dictatorship and fascist politics.

As relations between the two nuclear-armed neighbours nosedived following the Pulwama attack of February 14, some young friends of the Punjabi writer Neelum Ahmad Bashir in Lahore pressed her to write a poem about the alarming situation.

“I have my own strong feelings about the issue,” says Neelum, better known for her short stories. “I couldn’t refuse them.”

She wrote ‘Humsaye Maa Jaye’ (children of the same soil) practically in one sitting. The young people, who run a small company called Buzzer Media, filmed her reciting the poem, a dialogue between two women neighbours. Shared to her Facebook page as a public post, the video bears the hashtag #PeaceIndiaPakistan.

Speaking in Punjabi, Neelum starts by offering her “dear friends from India” a large bouquet of flowers placed before her. “Even the dupatta I’m wearing is a gift from dear Indian friends,” she says.

The Indian friends who gifted the dupatta had visited Pakistan just months earlier, and Neelum had taken them to Narowal – the propsed Kartarpur corridor area. But relations between their countries have dipped to the extent that such visits are even more difficult now.

Neelum’s father Ahmad Bashir was a well-known progressive journalist, a beloved maverick who fought for the related causes of democracy, peace and freedom of expression. During General Zia’s military rule in the 1980s, when the authorities banned his work, he wrote newspaper columns under different bylines.

He supported his wife Mehmooda Bashir, now 87, in following her passion for singing at home. All five of their children – four sisters and a brother – inherited their father’s wit and their mother’s musical talent. The three who pursued their passions professionally are the eldest Neelum, an established writer, and the youngest daughters, actors Bushra Ansari and Asma Abbas.

Neelum’s poem particularly struck a chord with the Asma, the youngest, who joined the field of performing arts relatively late, about a decade ago. Married off young to a Pakistan army officer, she raised a family while moving from cantonment to cantonment. It was only after her husband retired and they settled back in Lahore that she was able to pursue her passion.

Last year, Sonika Bhardwaj, a young fan across the border in Ludhiana, Indian Punjab reached out to Asma. They became friends on Facebook. Asma would ask Sonika to find music and dance materials for her. Sonika, a web designer who runs a small IT company, started Asma’s official Facebook page that she manages.

“They are not technical, these Bashir sisters,” says Sonika affectionately.

Neelum’s poem moved Asma to tears. It reminded her of her friendship with Sonika. “We talk frequently in Punjabi to each other and have become close.”

When she shared it with Sonika, the young woman who she has never met was also moved to tears. Obtaining a visa to each other’s countries is difficult. Sonika insists that Asma has to come to her wedding – whenever that happens. It’s an exhilarating thought but then, the reality of the endless tensions between their two countries dampens the excitement.

Neelum’s poem is based on such emotions – the excitement of connecting and finding common ground, food, music, dance, the realisation that children on both sides go hungry, the pathos of looking at the birds that fly freely across and the moon and sun that light the skies on either side. And then the reminder that we’re meant to be ‘enemies’ and both sides that are nuclear-armed.

The poem had to be shared more widely. Asma discussed the idea with sister Bushra Ansari.

They initially thought of doing a theatre production. No, a music video would be around longer. They visualised it literally as two women neighbours, separated by a high wall impossible to climb because of the broken glass on top of it. They can’t see each other but carry on a dialogue, set to a catchy beat that emerges naturally from the poem’s rhythm as recited by Neelum.

Neelum made some revisions. The younger sisters got to work organising the video. It was difficult – they are rarely in the same place at the same time, with hectic shooting schedules in different cities.

Based in Karachi, Bushra organised a studio, video and sound equipment, music and film crew. The sisters managed a three-hour session to record the audio one afternoon. A Sunday was dedicated to filming the performance. The video editing and post-production took another couple of days.

Within three days, they had put together what they describe as a “music video that goes beyond war and borders to the hearts of people living so close, and yet so far away”.

Screenshot from Bushra Ansari’s YouTube channel shortly after the video was uploaded.

The video, viewed over four million times on Bushra’s YouTube channel alone since she first posted it on 3 April 2019, speaks to the people’s aspirations for peace and good relations. The 34 channel subscribers on 4 April shot up to over 25,000 within a couple of days. By the end of the month, there were nearly 70,000 subscribers. Besides the thousands of times the video has been shared on various social media platforms.

“Weren’t you afraid to make this statement at such a time?” someone asked Asma.

The thought never occurred to any of the sisters. Where ever he is, I’m sure Ahmed Bashir is looking down approvingly and smiling his wicked smile.

Children of the same soil

Neighbour oh neighbour, my lovely neighbor
Come closer and listen to me
I hear there’s some trouble between our two countries
Oh.. let it be
Let’s laugh it off
It’s just politicians playing games

Come, let’s talk of something else
I often wonder your home is like
And I wonder the same
I think we have similar homes and lives
We have the same skies over our heads and watch the same moon at night

They say on TV.. that you are my enemy
I have also heard that you.. hate me terribly

Dear sweet neighbor… what should we cook today?
How about some spinach…or maybe lentils?
Whatever we cook, let’s exchange it with each other

You have India, I have Pakistan

We have the same issues of food, water, electricity
Your children go hungry, so do mine
The glass on the dividing wall knows nothing of our pain

Neighbour, dear sweet neighbour
I hear from TV that you have an atom bomb
I heard the same, that you have an atom
If the atoms explode… the birds and the crows will die
We will also die like sitting ducks
Humanity will perish
Come, let’s take these damn atoms and throw them in fire!

Let’s make an item number of these bombs and dance a wild dance
Let’s sing and dance
Let’s climb this dividing wall
How shall I climb, my dear?
The glass pieces on the wall will pierce my heart…
Bleed my soul

Please pluck out these glass pieces, throw them out
Let’s dance when the fireworks begin
Let’s be happy and soothe our souls
Ease the pain of our wounds
And if nothing else
Let’s exchange our chunnies
Let’s sing
Dance a giddha
Be happy
Laugh a lot
Let’s not pay attention to petty issues
Our precious neighborhood is very dear to us

This is a slightly updated version of the article originally published in TheWire,  6 April 2019