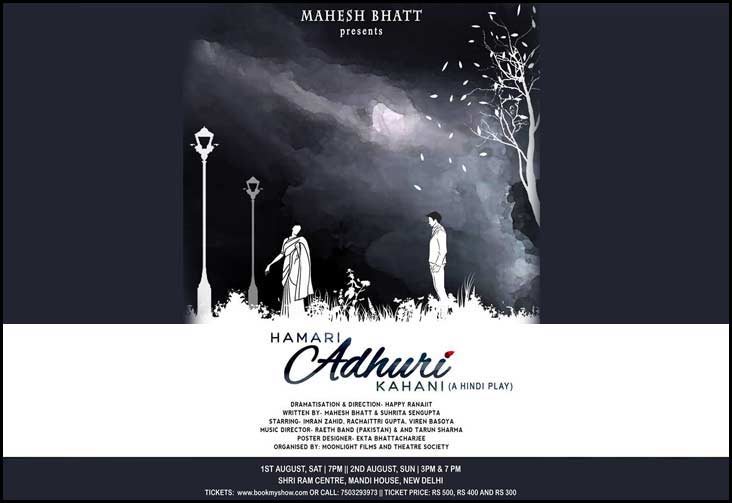 With three theatrical productions already under his belt and a fourth, ‘Milne Do’, underway, peacenik filmmaker Mahesh Bhatt’s new cross-border project is set to launch in Delhi before heading for stages in Pakistan

Rachaittri Gupta: nervous and excited about her part

The earlier two theatrical adaptations of veteran filmmaker and producer Mahesh Bhatt’s films Daddy and Arth both took decades to hit the stage. Now that he has started on this path, Bhatt is carrying forward the trend with a soon-to-be launched stage production of his film Hamari Adhuri Kahaani (Our Half-told Story), released in cinemas barely a month ago.

The play is expected to premiere in New Delhi in August, adapted from the film based on Bhatt’s recently published novel “All That Could Have Been”, co-authored with Suhrita Sengupta. This may well be the first time for a novel, its film and its theatrical adaptation to be out in same year.

The music for the stage production is being composed by acclaimed Pakistani sufi rock band Raeth. Bhatt hopes to take it to Lahore and Karachi.

“This project will be special for us, as it’s an opportunity to improve Indo-Pak relations. We all are very excited that the play would be presented in Lahore and Karachi as well,” said Wajhi Farooki, Raeth’s lead singer.

The film’s original star cast is being replaced with new actors in the stage production. The director too, is different. While Mohit Suri of Aashiqui 2 fame directed the film, this task for the stage production falls to award winning director and actor Happy Ranajit, a graduate of the National School of Drama.

“Entertainment is gradually shifting from a single window system to a multi-dimensional one,” says Mahesh Bhatt. “With Hamari Adhuri Kahaani, the audience can experience the same story in three different mediums – literary, cinematic and theatre.”

Bhatt revealed that like all his cult movies, this one too is based on his personal experiences. “Hamari Adhuri Kahaani has the heartbeat of my mother, who lived a difficult, solitary life. Her husband, whom she loved so intensely, was conspicuous by his absence,” he said.

The story revolves around Aarav, a rich, suave hotelier, who falls in love with an already married florist, Vasudha.

Bhatt’s trusted protege Imran Zahid plays the male lead of Aarav in the stage adaptation, a part played by Emraan Hashmi in the movie. Zahid also played the leads in Bhatt’s earlier theatrical adaptations of his films Daddy and Arth and garnered rave reviews.

“Bhatt saheb feels I will do justice to the lead character because I have earlier played characters pulled from real-life situations, as in the stage adaptations of Arth and Daddy or The Last Salute,” said Imran Zahid.

Delhi-based theatre artist Rachaittri Gupta will play the female lead Vasudha, a role that Vidya Balan did in the film. Rachaittri is currently playing the second lead in Bollywood stage musical “Zangoora” a live venue in Gurgaon, according to a report by IANS.

“When I started writing ‘Hamari Adhuri Kahani’, I wanted to plough through my childhood of having seen my mother fight the battles of single motherhood,” said Mahesh Bhatt.

A note for Indo-Pak peace: Pakistani band Raeth will do the music for Mahesh Bhatt’s new stage production. File photos.

“Vasudha was built from that space and yet she flowers into a beloved in her matured years. So finding a face for this character was crucial. Rachaittri will be able to bring Vasudha to life all over again on stage, of that I am confident,” he told IANS.

Writer Sengupta agrees Rachaittri is the perfect fit for the role. “The character of Vasudha is extremely deep and inspiring. It took me tons of work to characterise her and bring her to the climax of the book as well as the film.” He feels that Rachaittri’s face “emanates the depth” required by the character.

For her part, Rachaittri says she is “nervous and excited at the same time”. She adds that she has done a lot of plays, “but this one is quite different.”

Firstly, it is a Mahesh Bhatt production, scripted by Bhatt himself, she explains. Secondly, following in the shoes of Vidya Balan, by whom she has long been inspired, will be tough. Thirdly, “the character of Vasudha itself is very challenging,” she says. “But I will try my level best to not let anyone down.”

Director Ranajit says she is the perfect blend of glamour and talent. “I was under pressure about the casting for the role of Vasudha and finally I selected Rachaittri as I had seen her in Kingdom of Dreams in the role of Lachhi. I liked her acting and I think she is a blend of glamour and talent, who can do justice to such a complex character and to the play,” he said.

Bhatt has already staged a play in Pakistan, when he took Daddy to Karachi to participate in the National Academy of Performing Arts NAPA International Theatre Festival in April. He has also been working on a collaborative play titled ‘Milne Do’ with the Lahore-based theatre group Azad Theatre and the music band Laal.

Eid prayers for peace: Reflections on "Celebrating Days for Peace" and an appeal The novelist who changed generations