What will a Modi win mean for Pakistan? 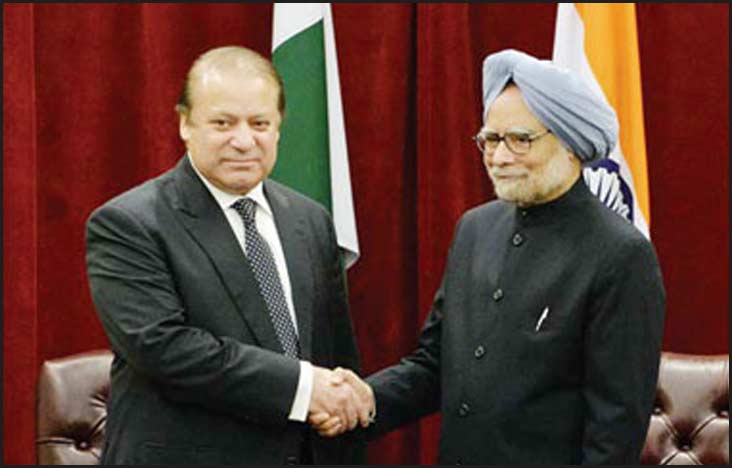 A decade of UPA-Congress rule in India ends with limited progress on Indo-Pak relations. The fact that outgoing Indian Prime Minister Manmohan Singh, despite his good intentions, could not visit the country of his birth even once sums up the constraints of this troubled relationship.

The first few years of Congress rule witnessed major developments in back-channel diplomacy. Speaking at an Aman ki Asha conference in Lahore, Pakistan’s former foreign minister Khursheed Mahmud Kasuri said a major breakthrough on the issue of Jammu and Kashmir was on the anvil, suspended due to domestic political crisis in 2007-2008. In the later phases of bilateral diplomacy, modest achievements on trade and visa liberalisation were realised.

The legacy of the 2008 Mumbai attack has continued to haunt the trajectory of the bilateral relations. Terrorism and the rise of non-state actors in Pakistan undermined the Singh administration’s political initiatives and held them hostage to the power of corporate media. This prevented the evolution of a well-calibrated Pakistan policy in India, and is a tough legacy for the incoming government in India.

Narendra Modi, who heads the Bharatiya Janata Party (BJP) that is expected to emerge as the single largest party in the Indian lower house of parliament, is viewed as a right-wing hardliner. He is seen to espouse Hindutva ideology and spout anti-Muslim rhetoric. Viewed as an architect of the anti-Muslim Gujarat riots of 2002, he is an archetype that informs the Pakistani mind about the evil design of Hindus. Many Pakistanis believe his current political standing is a reward for his anti-Muslim and anti-Pakistan ‘ideology’. Pakistan, caught up in domestic woes relating to internal security and stability, has seen little public discussion on this. But if elected Prime Minister, how will Modi impact the trajectory of Indo-Pak relations and regional stability?

Pakistan hopes to resume currently suspended composite dialogue with the new government in New Delhi. Islamabad has held back on taking steps to normalise trade with India, waiting for the new government before awarding the Non-Discriminatory Market Access (NDMA) to India. Sharif is keen to start a result-oriented engagement with the new Indian political dispensation.

However, the hawkish manifesto released by the BJP arouses scepticism about the future of Indo-Pak relations. At the same time, this manifesto leaves room for negotiation. Historically, the BJP’s record in office is not bad when it comes to engaging with Pakistan. Former PM Vajpayee engaged with Sharif in his last tenure and then, despite the disastrous Kargil war, talked to Gen. Musharraf.

Now, Nawaz Sharif may be constrained due to Modi’s reputation. This will provide ammunition to the non-state actors to prevent Sharif from purposeful engagement, while the military will find it easier to oppose normalisation.

The BJP manifesto’s hawkish and revisionist undertones include declaring Kashmir as a non-negotiable issue. It calls for removing Article 370 – which grants special status to state of Jammu and Kashmir as an autonomous state in the Indian Union – from the Indian constitution. The manifesto also calls for the reversal of India’s traditional nuclear doctrine built on the principle of ‘No-First Use’ (NFU), stating that it will not be the first to resort to using nuclear weapons in case of an armed conflict. Modi has said there will be no such reversal but if such a path is pursued, it may destabilise the fragile deterrence stability in the South Asia region.

Not unlike the Congress position, the BJP manifesto mentions Pakistan as a source of cross-border terrorism. It rhetorically promises a strong Indian ‘response’ to deal with Pakistan.

The Indian army’s growing assertiveness may also shape Modi’s policies. It has in the recent past resisted calls for troops’ withdrawal from Siachen and even scuttled an agreement that could have been a first step towards resolving the Kashmir dispute. A prospective alignment between the hawkish military and hardliner Modi on the policy of ‘zero-tolerance’ with Pakistan on issues of terrorism will heighten tensions; possible limited Indian military strikes on Pakistani territory will escalate a conflict under a nuclear overhang.

But there is room for optimism. The last time a major breakthrough in India-Pakistan relations took place was during a BJP government’s tenure in New Delhi. Secondly, Modi’s vision for economic growth and regional trade aligns with that of the Sharif administration, that focuses on economic opportunities aiming to improve ties with Afghanistan and India, with Pakistan as a trade hub for Central, Western and Southern Asia.

Modi as a ‘doer’, even if a hardliner, could lead a breakthrough in Indo-Pak relations by taking radical decisions compared to secular parties that expediently try to appease the right wing. Modi has used inflammatory words for Pakistan while attacking the incumbent party, but the exercise of power is a secular process. Modi will have to do business with Pakistan if he truly wishes to implement his economic agenda for India’s progress.

Improving relations with Pakistan will enable India to gain access to Central Asian markets, increasingly crucial for New Delhi. The competition with China may push a Modi government towards a more centrist approach while dealing with Islamabad.

It remains to be seen which of Modi’s many faces will prevail after May 2014 The ‘Hindu-extremist’, ‘anti-Muslim’ — or the pragmatic, developmentalist who might follow the footsteps of former Indian premier Vajpayee to make a fresh start with Pakistan?

The two countries are expected to soon resume bilateral dialogue. Will Pakistan remain hostage to the old, worn out doctrines on India or move towards a fresh start? The most critical factor for Islamabad would be to rein in the non-state actors who zealously guard Pakistan’s ideological frontiers.

The writer is an author, policy analyst and a consulting editor for The Friday Times. Excerpted from his essay at http://www.boell.de/en

Briefs Why India needs to engage with Pakistan