Why India needs to engage with Pakistan 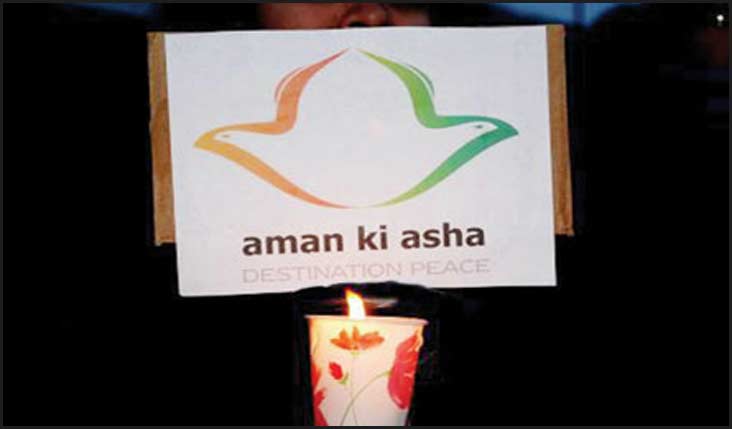 Peace demo in Delhi: Keep the light of peace alight

Instead of summit meetings offering photo ops, we need co-operation on the ground
By Samir Gupta

or 66 years India and Pakistan have tried to outmaneuver each other in the great game of geopolitics. Although much smaller in size, Pakistan held its own until the 1990s, doing better than India in most measures of success as a nation. It had better human development, international relations, trade and most importantly, popular sports. Pakistan’s national teams for hockey and cricket were consistently better than India’s for most of the 20th century. However, Pakistan missed one trick that cost it dear and led to the current dire situation.

In its zeal to outdo “Hindu” India, Pakistan allowed its armed forces to formulate foreign policy to keep it safe from the “enemy”. That is a complex subject that experts have analysed threadbare. What is relevant here is that the downward spiral in Pakistan coincided with India’s rise in the last 20 years. This has had a profound impact on bilateral relations.

Through the 1980s and 1990s India was urging Pakistan to improve relations in areas other than Kashmir while Pakistan insisted on keeping Kashmir as the centerpiece of all negotiations. This has changed dramatically over the last 20 years. India now refuses to talk to Pakistan until Pakistan sorts out India’s security concerns. The problem of course is that the civilian government cannot be reasonably expected to make much headway in this area. The elected Pakistan government, already on the backfoot in many areas, is keen to normalise relations with India – never has South Asia seen a head of government as enthusiastic about peace as Nawaz Sharif.

By now, however, India sees little benefit in engaging a Pakistani government that doesn’t have the power to address India’s security concerns, and perceives engagement on the economic side as not generating enough economic benefit to offset the perceived potential security risk. Most “experts” turn up their nose and pontificate about what Pakistan needs to do to get out of the mess. There is an element of schadenfreude in these conversations

This, I dare say, is fallacious thinking and action. India will gain immensely from improved relations with Pakistan. If ever there was a chance for India to engage with the civil society in Pakistan, it is now. India needs to be magnanimous (some would say, like an elder brother) and win the hearts and minds of the man on the street in Pakistan. For the first time in history, every single political party in Pakistan has publicly expressed support for better relations with India (although some are backtracking for political reasons now).

Experts are quick to point out that there is a trust deficit – particularly in India, where there is a belief that Pakistan cannot be trusted. However, only the naive will argue that there are any innocents here. Almost all the players in this game of geopolitics have skeletons in their closet, including India.

No one is asking for a dramatic embrace across the border. It is obvious that attempts to normalise relations provoke a sure shot and deadly response from vested interests. What is needed is a more subtle and less public shift. Instead of summit meetings offering photo ops, we need co-operation on the ground.

If the two militaries cannot see eye to eye, begin with easing the trade restrictions in gradual and unspectacular fashion. While we wait for Pakistan to grant India the MFN status, there is much that can be done on the ground. Let the traders and the businessmen on both sides guide the officials. Remove the non-tariff barriers to trade. Above all, change the policy of discouraging travel between the two countries by easing the visa process. Trust the people to break through the barriers of hate. Terrorists do not apply for tourist visas. They take the boat or infiltrate across the border.

There is no denying that there are malicious elements in Pakistan. But we cannot give in to the compulsive need of vested interests to paint an entire nation and its people as a monochromatic villain. Many in India are conveniently ignorant of our direct as well as an indirect role in Pakistan’s obsessions with security, contributing to the security agencies’ dominance.

“It is not the strongest of the species that survives or the most intelligent. It is the one that is most adaptable to change,” wrote Charles Darwin. India must think outside the box. Conventional thinking on foreign policy and diplomacy has failed us miserably. It is time to use common sense. A nation of 1.2 billion people needs to be smart. The stakes are high and the time is right. #MilneDo

The author is an IT professional and a peace activist based in Ghaziabad, India

What will a Modi win mean for Pakistan? Dharna Warna Part 1