500th Pakistani to get liver transplant in India returns home 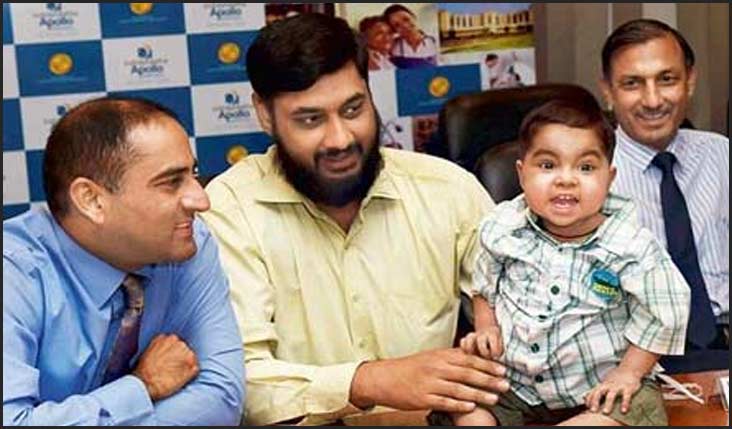 Karachi: Two-year-old Nalain Aziz, who became the 500th Pakistani to receive a liver transplant in India, crossed the Wagah Border and returned to his hometown Lahore on Thursday.

Aziz was diagnosed with a rare ailment – biliary atresia – where the liver and intestine lose connection. Babies with this condition develop progressive jaundice and need to undergo a surgery commonly called the Kasai operation.

When he was just two months old, Aziz underwent an unsuccessful surgery. After multiple visits to the hospital it was declared that his liver had failed and he needed a transplant. As the surgery is still in its initial stages in Pakistan, Aziz was referred to India. His blood group O-positive matched with his mother who became his donor.

With a success rate of over 90 percent, Indraprastha Apollo Hospitals created a milestone by becoming the first hospital in India to reach the 500 mark for patients from a single foreign country. Pakistani patients constitute 29 percent of the liver transplants performed at Apollo Hospitals, Delhi.

Celebrating the occasion on Wednesday in New Delhi, Prof Subash Gupta, the chief liver transplant surgeon at Apollo Hospitals Delhi, said: “It is a proud moment for us to have completed 500 cases. We feel a sense of accomplishment by the faith and courage shown by our patients, who have travelled such long distances for a liver transplant. It will be our endeavour to further help people from across the border to have access to quality and cost-effective transplantation at our centre.”

Addressing the press conference, Prof Anupam Sibal, group medical director and senior paediatric gastroenterologist Apollo Hospitals Delhi, said: “We are delighted that we have been able to touch so many lives from across the border. Our experience with so many Pakistani patients and their families has taught us so much about the Pakistani culture and the similarities between our societies. From the time we performed the first successful liver transplant in India in 1998, the Apollo Transplant Programme has performed 1,700 liver transplants in children and adults. Our first recipient remains well 15 years post liver transplant.”

Aziz was referred to India through a project called “Peace Clinic” where Dr Gupta talks to patients in an online video conversation. The project was initiated by Naved Aslam, a Pakistani who was treated for a heart problem in India.

“My ailment needed a very complex surgery which doctors in Pakistan were not able to perform. I travelled to India. The surgery gave me a new life, and so I began connecting patients in Pakistan to Indian doctors,” says Aslam.

In the next phase, the Ziauddin University Hospital in Karachi, a partner of the Peace Clinic, will receive surgeons from India who will teach the finer details of liver transplant surgeries to Pakistani doctors.

Satisfied with the medical treatment his son got in India, Shoaib Nawaz said: “For parents scared of travelling to India for a liver transplant, let me assure them this chance is worth taking.”