70 years on: The common man looks so similar 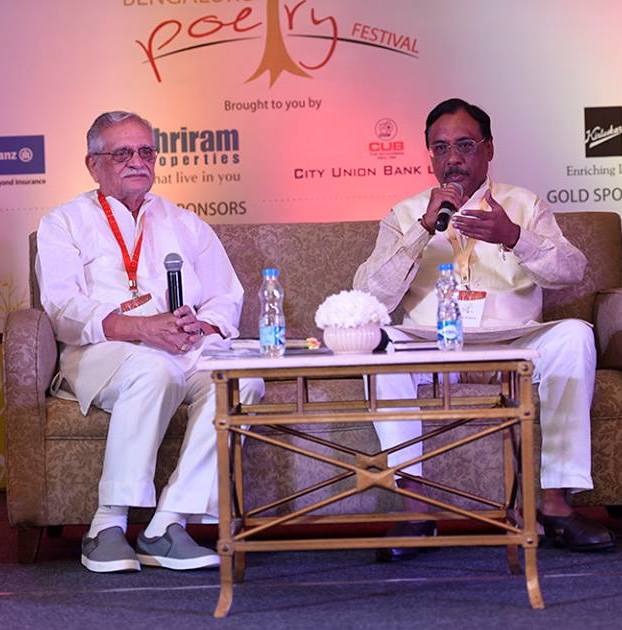 Aspirations for peace between India and Pakistan came to the fore at the Bengaluru Poetry Festival, with sessions featuring the legendary poet Gulzar and activists Saira Shah Halim and Ruchhita Kazaria

Audience at The Leela Palace Hotel

None other than the legendary poet and lyricist Gulzar inaugurated the much-awaited second edition of the Bengaluru Poetry Festival at The Leela Palace on 5 August 2017. At the afternoon session, as crowds jostled for space in the auditorium, the presenter’s voice reverberated reverberated from the dias:

Dreams have no frontiers

Every day, with eyes closed, I go across the border,

These opening lines of Gulzar’s famous poem introduced the poet as he stepped on to the stage to join Pavan K. V

arma in dialogue. The official translator of Gulzar’s poetry, Varma is a member of parliament in the Rajya Sabha representing Janata Dal (United), he is former Indian Foreign Service officer and former advisor to the Chief Minister of Bihar, Nitish Kumar, with cabinet rank.

Gulzar’s verses that opened the session have been a symbol for Aman ki Asha (Hope for Peace) since the India-Pakistan peace initiative was launched in 2010. Gulzar also penned what came to be known as the Aman Ki Asha anthem: ‘Nazar mein rehte ho, jab tum nazar nahin aatey!’ (You are in my sight, even when I don’t see you). He is also one of the signatories of the Resolution for the Peace Now and Forever Campaign Between India and Pakistan, now online at this link.

Having penned soulful pieces of prose and poetry revolving around the human tragedies of Partition and the ghastly realities it still plays out in both countries, Gulzar’s session on ‘Suspected Poems’ was a bid to explore various threads ranging from the disturbed climate in India and the region, to the culture of intolerance and the plight of a commoner.

As the session ended, an audience request prompted Gulzar to recite his poem ‘Karachi’, published in his compilation ‘Suspected Poems’ (Penguin Viking).

In your town too

In the same way as in mine;

When in town squares

The vultures come swooping down.

In the two countries to which you and I belong

The common man looks so similar!

The following day saw another focus on India-Pakistan in the session on Angst Poetry moderated by Samantak Bhadra. Two activists from Kolkata, Saira Shah Halim and Ruchhita Kazaria recited poems on the prevailing turbulent times. The session began with Kazaria, an Aman Ki Asha cheerleader and passionate peace crusader, introducing the movement and taking the audience through the initiative, ‘Milne Do’.

The session featured were four poems, all in Hindustani, with translations in English. The mood was of celebrating satire through the lens of 70 years of partition, countering the mindless hate-mongering, second-hand baggage and activism. Ruchhita Kazaria’s poem ‘Kya kaha tumne Gurmehar Kaur?’ based on the experiences of a young woman student, daughter of an Indian soldier killed on the Kashmir border, was steeped in irony.

Particularly soul-warming was the audience response, both during and after the session — a beeline for questions about the movement and silent solidarity emoted through scores of eyes.

An evening well invested, bridging gaps and mindsets through peace poetry, mulling on the pity of war.

The audience included a senior administrator of the Aman ki Asha Facebook group, octogenarian  Konchadi Vasanth Pai. As Kazaria introduced him and spoke about his contribution to the movement, he broke out in an impish grin, and raised his hand to wave out to a hundred faces smiling at him.

The Bengaluru Poetry Festival emerged from the realization by Subodh and Lakshmi, the founders of Atta Galatta, The Bookstore and Events Space, that while poetry as a form of self-expression was gaining immense popularity, and Indian poets and poetry were increasingly being recognized the world over, there were limited opportunities available for poets within the existing literary festival platforms. Palgun K. J. remains the spine of the festival who conceived the program and sowed the seeds of the session on activism that brought the spirit of India-Pakistan peace activism to the 2017 edition.