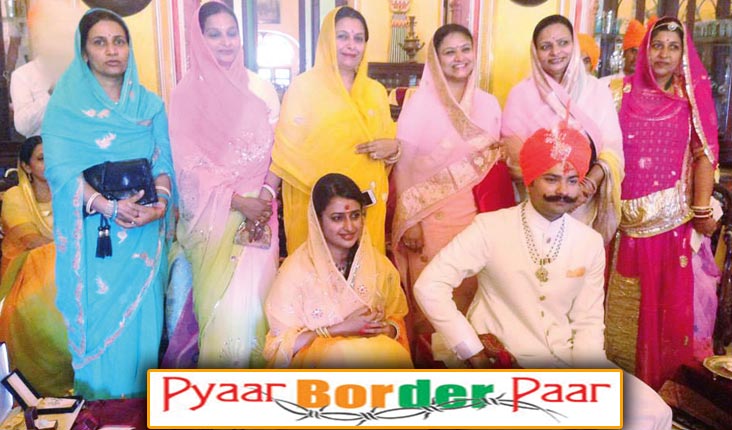 There is great excitement in the Rajput community in India and in Pakistan about the forthcoming wedding of two princely families from either side of the border involving the Tikka ceremony that will take place in Pakistan for the first time since 1947.

The young couple, Kunwar Karni Sodha of Amarkot (Umarkot), Sindh, and Padmini Singh Rathore, of Thikana Kanota, Jaipur, exchanged rings at a Roka ceremony in Jaipur on June 10 this year, five days after they first met at a relative’s house.

Karni Sodha is the son of Rani Nalini Prabha and Rana Hamir Singh of Amarkot. The historic town is famous as the birthplace of Akbar (later known as The Great) after the then Rana gave sanctuary to the Mughal king Humayun who was fleeing Sher Shah Suri. The bride Padmini Rathore’s father Thakur Man Singh Rathore owns the Narain Niwas Palace Hotel in Jaipur city and hotel Castle Kanota in his principality, Kanota.

The Tikka (formal engagement) ceremony will take place at Rana Jagir, Amarkot, on December 7, with 30 guests from India arriving on Dec. 4, bringing gifts for the groom’s family as is traditional. After performing the Tikka ceremony, the bride’s brother (in this case her twin Kunwar Pratap Singh) gives the groom a sword — which will have to be foregone this time due to international travel restrictions — and other gifts.

Thakur Man Singh will present Karni Sodha the Lagan — the official invitation to the groom and his family to come to the wedding, which is scheduled to take place in February 2015 in Jaipur.

This is the first time that the Tikka ceremony will take place in Pakistan since 1947 although several cross-border royal Rajput weddings have taken place since then largely due to the Rajput custom of not marrying within the same family.

A graduate of SZABIST in Karachi, Karni Sodha has worked with a barrister in Karachi after obtaining an LLB Honours degree (University of London external program) in August last year. These days he is looking after the family farms, and rises before dawn to do his daily rounds.

Padmini Rathore attended Maharani Gayatri Devi school in Jaipur and St Bedes College, Shimla. She has a Graphics Design diploma from Jaipur and played cricket at the school and national levels. She lives in Jaipur city as well as the family’s village Kanota.

The restrictive visa regime between India and Pakistan particularly affects the Rajputs of Pakistan. Forbidden to marry within their own family, they must forge marital alliances with Rajput families in India. Daughters who are married across the border always face a problem in visiting their country of birth.

Mahesh Bhatt’s "Milne Do" When alienation melts away