“Hostility between India and Pakistan can be ended…” – Dr. Sandeep Pandey 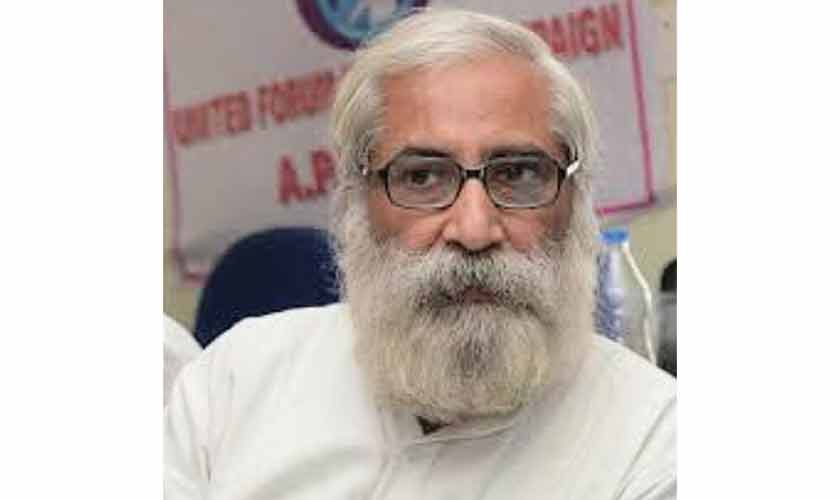 A simple man, who refuses to own a mobile phone, Dr Sandeep Pandey is a known social activist from India.

He looks like a down-to-earth sufi whose lifestyle speaks for his empathy and close ties with the ordinary people of his society. Way back when I invited him to speak at the South Asia Peace Conference I organised at a university in Texas, he appeared in a simple kurta-pajama with flip-flop sandals.

Dr Sandeep has a doctoral degree from the prestigious University of California, Berkeley, in mechanical engineering. Since then, he has taught at several universities in India, but activism seems to be his lifelong passion.

He has been working for peace and socio-cultural harmony in South Asia. He and his group organised peace marches from Karachi to Delhi and Delhi to Multan in 2015. In 1999, he walked 1,000 kilometer from the Indian nuclear test site of Pokhran to Sarnath, Buddha‘s first teaching place, to create awareness about nuclear devastation. He told me how difficult it was to deal with the bureaucratic hurdles created to stop peace marches in India and Pakistan.

Dr Pandey has fought throughout his life to create an egalitarian society, education for underprivileged children, human rights and corporate accountability, among other issues. For these activities, he has been arrested and jailed several times.

In the following interview with The News on Sunday, Dr Pandey speaks candidly on burning issues of freedom of expression, nuclear disarmament, peace and communal harmony in South Asia.

The News on Sunday (TNS): How would you define freedom of expression and media freedoms in the contemporary world?

Dr Sandeep Pandey (SP): As right-wing thinking has begun dominating in different parts of the world, freedom of expression and media have shrunk. In the post-truth world, dominant communities/ powers, presenting themselves as victims, have been projecting their narrative, and any voice which questions this narrative is drowned. As a result, independent thinking has been curtailed and intellectuals are denigrated or humiliated.

TNS: The traditional wisdom says that free media are essential for a functional democracy. In modern-day democracies, however, elected representatives seem to have a free hand to curb media freedoms. Your opinion?

SP: The majoritarian rule of the dominant section of society by creating its hegemony has impeded functioning democracies by squeezing out free debates. Many members of the ruling dispensations act more as vigilantes than people‘s representatives. They seem to be more worried about protecting the government than the people who elected them. Media also becomes a target in this exercise, and more often than not, media chooses to become subservient to the ruling establishment for its survival.

TNS: Postcolonial India prides itself in being an established democracy, while Pakistan has been experiencing a hybrid democracy with a strong security establishment. Despite this difference, both nations are witnessing the same kind of media censorship. So, how would you compare the political dynamics in both countries that led to the ongoing level of media censorship?

SP: In India, media has been relatively free for most of the time during its democratic history. Two exceptions are the period of Emergency and the rule of the right-wing Bhartiya Janata Party. In Pakistan, which has not had long periods of democratic rule, surprisingly media asserted its independence and always gave a feeling that it was free. However, covert anti-democratic forces have always attempted to censor media in both countries. Although it sometimes becomes apparent, on most occasions, it remains hidden.

TNS: Since the Partition, India and Pakistan have been at loggerheads.They are also locked in a perpetual state of nuclear weapons race. In your opinion, how can we end this madness?

SP: Hostility between India and Pakistan can be ended by creating a Nuclear Weapons Free Zone in South Asia. Such zones are in existence in Latin America and the Caribbean through the Treaty of Tlatelolco for Prohibition of Nuclear Weapons, in South Pacific the Treaty of Rarotonga, in Southeast Asia the Treaty of Bangkok, in Africa the Treaty of Pelindaba, and in Central Asia. All outstanding issues, including Kashmir, should be resolved through dialogue. Most importantly, the border between India and Pakistan should be opened for common citizens the way it has been done to visit the Kartarpur Sahib gurudwara. Bringing down the wall will bring instant normalcy in relations, creating a conducive atmosphere for resolving disputes.

TNS: India and Pakistan dominate the discussion of peace and development in South Asia at regional and international forums, while issues of smaller countries are ignored. Do you think it is fair?

SP: It is unfair. Other countries should also be given equal importance. On the one hand, we ignore the positive achievements in Bhutan and Bangladesh related to development, and on the other hand, we underplay the Tamil genocide in Sri Lanka. We must pay more attention to what is going on in smaller countries in the region. Also, by trusting other nations and taking them along, India should give up its ambition of becoming a regional superpower. Instead, it should play the role of facilitator in a democratic fashion in forging regional cooperation. Moreover, it should give up its big brother attitude and stop being a threat to the smaller countries around it. Right now, it is held in awe by most of its neighbors.

TNS: Despite different levels of economic development, most countries in the region face extreme levels of poverty, lack of healthcare facilities, hunger, unemployment, illiteracy and an impending water crisis. How can we create egalitarian societies in the region?

SP: We must resolve to reverse the neo-liberal economic policies, resulting in an increasing gulf between rich and poor, unemployment, degradation of public services like education, healthcare, and environmental devastation, etc. We must make a conscious attempt to remove hunger, poverty, illiteracy, homelessness, improve public services like education, health care, transportation and communication, and preserve our environment to ensure that natural resources are not only available for us but also for future generations.

Political leaders have been busy with power games and have not cared about the masses. A feudal mindset still dominates the political culture. Even in a democracy in India, sons and daughters of politicians become unquestionable heirs. Corruption is an integral part of our systems so that political leaders can fund their politics and amass personal wealth.

TNS: South Asians have been living in harmony for centuries. Currently the region has witnessed all kinds of religious, ethnic and racial conflicts. How do you analyse the situation?

SP: South Asia has been witness to the unique culture of unity in diversity. However, the right-wing forces are out to weaken it. First, India was divided based on religion. Then in India, the right-wing found an easy way of mobilising votes by creating a communal frenzy.

When right-wing forces capture power, they always overshadow the communal harmony present in a society built over centuries. So this struggle between the traditional syncretic and politically hegemonic religious cultures will continue. It remains to be seen which one survives. Usually, any ideology driven by hate and violence doesn‘t survive for a long time as it is not the natural state for human beings.

TNS: Why does peace in South Asia, especially between India and Pakistan, seem to be a remote possibility? What hurdles do you see in establishing a durable peace in the region?

SP: Only when India and Pakistan realise that peace and friendship are in their mutual interest, the possibility for lasting peace can become a reality.

Most people realise the futility of the arms race. We take consolation in that when leaders talk, they must speak our language, even though many do not do anything substantial to establish peace and friendship. With the nuclearisation of South Asia, India and Pakistan have no choice but to talk about peace, as any war can be catastrophic.

The Kargil War in 1999 was the first in history where two nuclear powers came face to face. This is potentially a very dangerous situation.

Moreover, there is the danger that these weapons could fall into the hands of terrorists. With so many terrorist attacks in both countries, we should now feel the need for peace more than ever before. There should also be some serious efforts to resolve the Kashmir issue.

TNS: How do you see the future of South Asia in terms of peace, equality and social harmony?

SP: Ultimately peace and social harmony will prevail because that is the only normal state in which human society can exist. However, the disturbances created by right-wing politics will take time to reach a steady-state. Equality is much tougher to achieve because that requires fighting against the unjust economic policies that favour the rich. The rich, anywhere, will not give up their privileges easily. The rich control the politics by financing the people who grab power.

TNS: Thanks for your thoughtful analyses of burning issues in the region. Finally, please identify and discuss three issues that you consider a threat to peace and progress in the region.

SP: One, economic policies which promote inequality; two, politics that divide people in the name of caste and religion; three, interference of global powers with hegemonic ambitions. A society having economic inequalities will never be peaceful. Moreover, if people are affected by malnourishment and hunger, they cannot give their best to the society as they will always underperform. Caste, religious and ethnic divisions compound the economic inequalities as they tend to justify or promote the latter. For example, in a hierarchical caste order, the less privileged at the lower rung will be considered natural. When global powers get involved, they prioritise their economic-military interests and always exploit the other nations. Moreover, their economic-military interests will be served only when there is unrest somewhere. That is why we see how even after the end of the Cold War, the United States felt compelled to promote the North Atlantic Treaty Organisation, which should have been dismantled. Instead, the situation resulted in Russia becoming insecure and ultimately attacking Ukraine.

The author has co-edited From Terrorism to Television: Dynamics of Media, State, and Society in Pakistan (2020, Routledge). With a doctorate in Mass Communication from the University of Wisconsin-Madison (US), he served several American universities as faculty of communication, assistant dean and director.

Kabir Festival 2022: Celebrating the humanistic values of an ancient mystic Time for a new beginning?