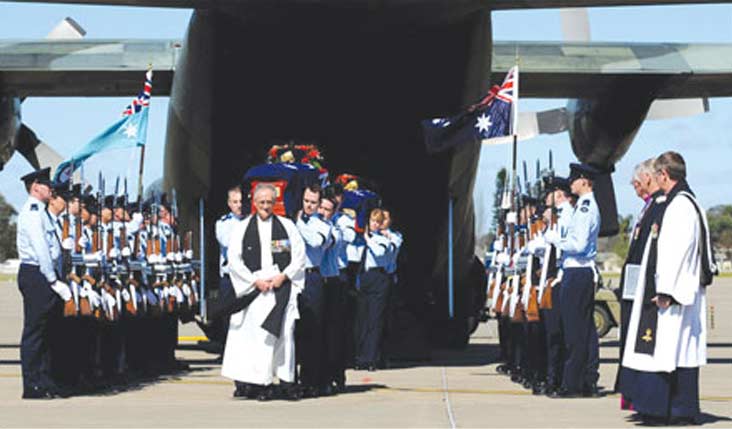 I write, from Canberra, Australia, as a concerned former Indian national, of the continuing plight of prisoners of war from 1971 of both India and Pakistan and their bewildered families.

The Australians, by contrast, to their great credit, have brought home to Australia the remains of every one of their servicemen missing in action, 38 years after the conflict in Vietnam (which ended in 1971).

Sadly, the unceasing efforts of families from India and probably from Pakistan as well, appear to have been bogged down, permanently it seems, by circumstances quite beyond their control.

I should mention that it is possible, too, that prisoners from the 1965 conflict involving India and Pakistan have been missing, possibly, if not probably, imprisoned since that time.

In March 2010, I learned, as a result of a planned reunion of my classmates from Sherwood College, Nainital, India, that one of our classmates, Captain Kamal Bakshi was missing since 6 December 1971.

It appears that Capt Bakshi and his subedar, Assa Singh, of 5 Sikh Regiment of the Indian Army, were captured on 6 December 1971 after a battle between the forces of India and Pakistan for possession of Mandiala South Ridge, northwest of Chhamb.

Since last March, I have pursued the matter of Capt Bakshi and Subedar Assa Singh in futile efforts to determine their whereabouts.

Wing Commander H S Gill of the Indian Air Force was shot down over Badin on 13 December 1971, yet reports have surfaced of his capture and subsequent sighting in Fort Attock.

I learned as well of the plight of Major S P S. Waraich of 15 Punjab Regiment of the Indian Army who, it appears, was taken prisoner during the battle for Hussainiwala on 3 December 1971. Since that date, nothing further has been heard of Major Waraich.

Major Waraich’s plight and that of his family is, tragically, similar in nature to that endured by Capt Bakshi, Subedar Assa Singh, Wing Commander H S Gill and their families. These POWs are have come to be known as the ‘Forgotten 54’.

There have been reports too of Pakistani prisoners of war from 1971 being incarcerated in India since their capture in 1971. According to a report in the Daily Mail, New Delhi, quoting a source from the Ministry of Defence, India, “18 Pakistan Army personnel, who were made Prisoners of War in 1965 and 1971 Pak-India Wars, are still being held in Indian custody, contrary to all norms of humanity as well in direct contravention of the Geneva Convention. Indian government has failed to respond to repeated requests about the status of the POWs. The Daily Mail’s findings indicate that these POWs also include two majors who went missing during the wars” (June 24, 2010).

All the men referred to by name above and any others listed as ‘missing’ should of course, as is commonly known, have been released at the cessation of hostilities in 1971 or as soon as possible thereafter.

As for denials from both India and Pakistan on the matter of missing PoWs – as this report on an exchange of prisoners during the Kargil conflict in 1999 notes, “such transfers are unusual – particularly because both sides had earlier denied holding prisoners of war” (India and Pakistan swap POWs, BBC News, 6 March 2004).

It is extremely important to note that the two Indian PoWs from the Kargil conflict were shockingly labelled, without the least shred of evidence, as ‘deserters’, for which, with no justification, their families were subjected to vindictive humiliation.

Such is the high price that those in the armed forces sometimes pay for their loyalty when they are unable to defend themselves and their honour against unjust attacks.

Regarding the numbers of those Indian prisoners of war presumed to be in the custody of Pakistan, the following is the best available estimate:

There have been numerous reported ‘sightings’ of men such as Subedar Assa Singh and Wing Commander H S Gill. There has been one ‘sighting’ of Capt Kamal Bakshi in Multan jail in 1983 but to the best of my knowledge, these sightings have not been acted upon to determine with certainty their accuracy or otherwise.

It appears to me that a tragic lack of political clout on the part of the relatives of those missing from both India and Pakistan, as well as ministerial and/or governmental obfuscation or inaction or both, has meant that those missing in action from 1971 and their relatives have been left in permanent limbo.

The absolutely unimaginable emotional and financial damage to families continues from 1971 to the present time.

The power to end this suffering is available and you, the Presidents of India and Pakistan and your army chiefs, possess this power and the ability to ensure that the truth is made available to the many families in India and Pakistan who live their lives clinging to hope while experiencing deep despair.

I appeal, therefore, to Presidents on both sides of the border between India and Pakistan to resolve this issue as a priority for the prisoners and their families, as long as this remains unresolved, there is unceasing pain for those most concerned, namely, those ‘missing’ and their relatives.

The writer is a former master mariner from India, now based in Canberra, Australia
Email : brian.mcm [email protected]