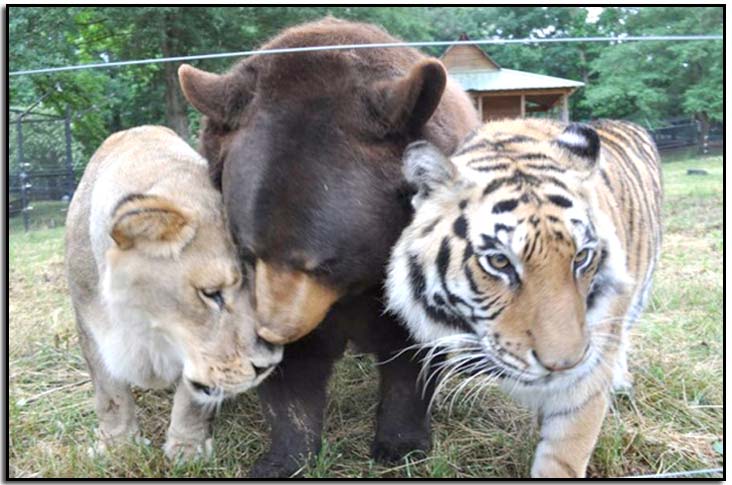 The African lion Leo, Baloo the bear, and Shere Khan, the Bengal tiger: best friends, a symbol of harmony

A message for peace from a former Indian Army officer

He has fought two wars against Pakistan, in 1965 and 1971, but Narindra Bhatia, who served the Indian Army for over 30 years and retired as a colonel in 1995, wishes his western neighbour well. Like many others, he hopes fervently for peace between both countries.

“The money we both have spent on wars and spreading hatred would have eliminated poverty, hunger, disease and malnutrition from both countries for ever,” he says.

In a recent email sent to his mailing list, shared with Aman ki Asha, the 73-year old retired soldier, whose ancestors belong to Sargodha (Bhera/Khushab) in Pakistan, sends greetings to Pakistanis and Indians for their Independence Days, August 14 and 15 respectively.

Deeply involved in working for the release of all prisoners of war held in India and Pakistan, Col. Bhatia also urges people on both sides to “resolve releasing all prisoners held in both countries.”

“Let Indo-Pak border be fenceless like Canada-US border. It is possible if we have political will and statesmanship on both sides. We have given chances to wars and hatred. Now let us give chance to PEACE and brotherhood. Let us ensure PEACE is not elusive, wild and idealistic dream.”

Col. Bhatia, an animal lover, also shared photos of the bear, lion, and tiger known as BLT, rescued as abused cubs from a drug trafficker, who have since lived together at Noah’s Ark, an animal sanctuary in Georgia, USA.

“If these three animals can live with love and affection why cannot India and Pakistan, Hindus and Muslims, Shias and Sunnis…JARRA SOCHIYE (just think)”

Leo, the African lion, Baloo, the black bear, and Shere Khan the Bengal tiger, would surely agree. And so do we.