‘A little more sense of urgency’ 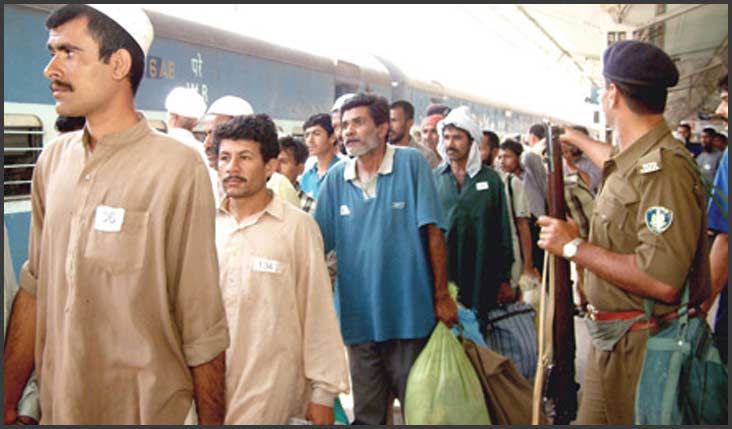 This latest arrest took place on the night of January 16. Barely ten days earlier, the Pakistani Maritime security had on January 7, arrested ten other Indian fishermen and seized their boats.

In all such cases, the fishermen were charged with violating the territorial waters of Pakistan.

Many among the Pakistani prisoners released by India were also probably fishermen held on identical charges. They had been languishing in Indian jails even after completion of their jail terms – a story that is all too familiar for Indian prisoners in Pakistani prisons too.

According to a report in daily The Hindu, “A Bench of Justices Aftab Alam and R M Lodha passed the order while issuing notice to the Centre on petitions filed by (journalist and human rights activist) Jatin Desai, who brought to the court’s notice that 877 Pakistanis, most of whom had crossed the border, had been languishing in prisons in India for a number of years.”

This situation exists on the Pakistan side of the border as well, as has been extensively reported in these pages previously.

The Indian Supreme court, according to news reports, in its brief order, said the identities of the 61 prisoners “should be verified forthwith and they should be released if their status was confirmed without waiting for a formal court order”.

Justice Alam is reported to have told the Solicitor-General who had agreed that the government would pass appropriate orders once the identities were established and travel documents accepted, “We deeply appreciate your efforts in this matter. But we expect a little more sense of urgency. While the track record of our country in protection of human rights is far better than some other countries, still we feel there is a lack of urgency demanded under Article 21 of the Constitution [right to life and liberty].”

“Justice Alam also favoured the Centre putting in place a proper mechanism to deal with such cases. For, the court was repeatedly coming across such cases.”

Justice Alam’s observation cannot be faulted. A proper mechanism is urgently needed to prevent this constant cycle of arrest, release and repeat that has been going on for far too long.