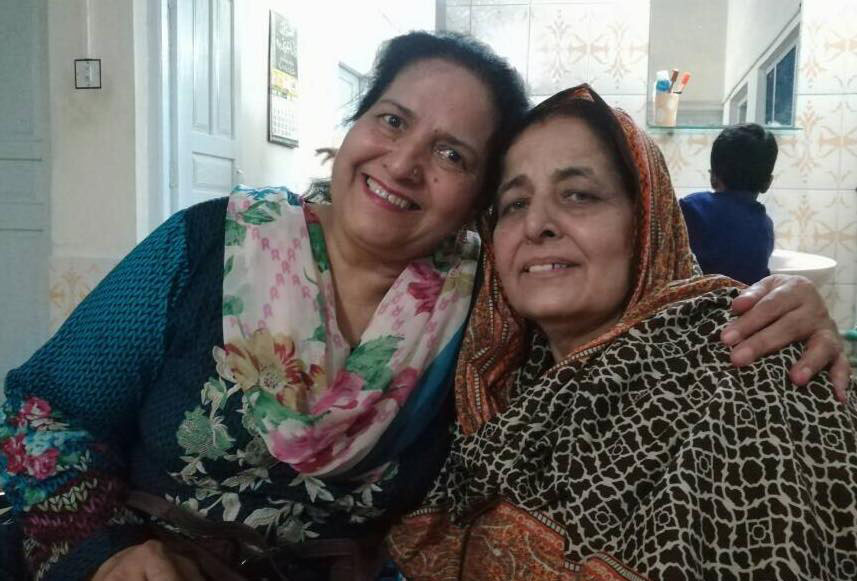 Nighat Tariq (left) with her aunt Tahira Hafeez: All the grieving family has now are memories and ‘what if’ questions. Family photo.

According to international humanitarian law the wounded and the sick have a right to be cared for no matter which side they are on. Delaying or denying medical visas is a matter of life and death for those caught in the middle of India-Pakistan tensions

This is the story of one preventable death, a tragedy caused by two unforgivable lapses: The home country’s refusal to invest in advanced medical treatments, and the ‘enemy’ country’s delay in granting a medical visa. This is just one story. There are thousands more.

Nighat Tariq, 55, mother of three, was thrice treated for Hepatitis C in various public and private hospitals in her home town, Faisalabad (formerly Lyallpur), Pakistan. Concerned that she still wasn’t eating well, Nida, her youngest daughter and a medical student, got an ultrasound done. The report provided on January 26, 2018, showed that Nighat had a large, malignant liver tumour.

The family went to Shifa Hospital, Islamabad seeking better healthcare and laboratory facilities, and got more workups done. Dr Faisal Dar, Pakistan’s leading liver transplant surgeon, oversaw the process. In consultation with other specialists, he advised removal of the cancerous tumour through a radiotherapy procedure called TARE to enable the patient to undergo liver transplant.

Babar Sattar and his mother: New lease of life thanks to India visa and doctors

No hospital in Pakistan has the expertise to administer the procedure. India was the next best option. The family applied for a medical visa. The patient’s health deteriorated as the family waited five weeks for India to make up its mind whether it would issue the visa or not.

It is a settled principle under international humanitarian law that the wounded and the sick have a right to be cared for no matter which side they are on. And here we are, two nuclear-armed neighbours, not at war but frozen in petty mind-sets, doing the meanest things to each other.

One of India’s ‘visionary’ decisions under the Modi regime has been to delay or refuse medical visas to sick Pakistanis. Back home, our own ‘visionaries’ have refused to invest in advanced medical treatments that would make it redundant for us to seek such visas.

With much prodding by the Indian High Commission in Islamabad, the visa was finally granted. Nighat reached Delhi along with her husband and daughter on March 9, 2018 to be treated by Dr Subash Gupta (who has been an angel to Pakistanis in need of liver transplants, including my mother) and his colleagues.

By then, unfortunately, the disease had progressed, and it was too late for TARE and the planned transplant. The family returned to Pakistan on March 23. Nighat passed away early morning March 27. At the moment all this mourning family has is “what-ifs”.

Back in 2010 my mother was suffering from liver failure due to Hep C. At the time Dr Dar was finishing his fellowship in liver transplantation at Kings College, London School of Medicine. He got us an appointment with his professor. But due to her fast deteriorating condition my mother couldn’t travel to the UK.

Pakistan and India weren’t best friends back then either, but the Indian High Commission stamped our visas over a weekend in December 2010. We reached India in time and with Dr Gupta’s excellent medical treatment, my mother got a second life.

In 2012 she suffered liver rejection and had to be hospitalised due to her critical condition. Dr Gupta advised that moving her out of hospital in such condition could be fatal. Fortunately, by then Dr Dar had returned to Pakistan and set up a liver transplant unit at Shifa. He along with the polite and skilful (but understated) Dr Atif Rana treated my mother for over a month and she finally came out of the woods.

Dr. Subash Gupta: An angel to Pakistanis in need of liver transplants

Initially due to Dr Gupta in Delhi and subsequently due to Dr Dar’s expertise and care in Islamabad, my mother has been able to live a full life post-transplant.

What if Dr Dar had chosen to continue to work in London, or joined a hospital that didn’t have the resources to set up a liver transplant centre? What if he had chosen to return to UK after a few years of ‘public service’ in Pakistan? My family didn’t have to deal with such ‘what-ifs’ in 2012.

But these what-ifs torture thousands of Pakistanis, like Nida and Nighat’s other family members. They must wonder whether their mother would be alive if a facility in Pakistan had been able to administer TARE, and if India had granted a visa on time.

The writer is a lawyer based in Islamabad. Email: [email protected]. This is an extract from his column Legal Eye in The News International, March 31, 2018