A shining example of humanity 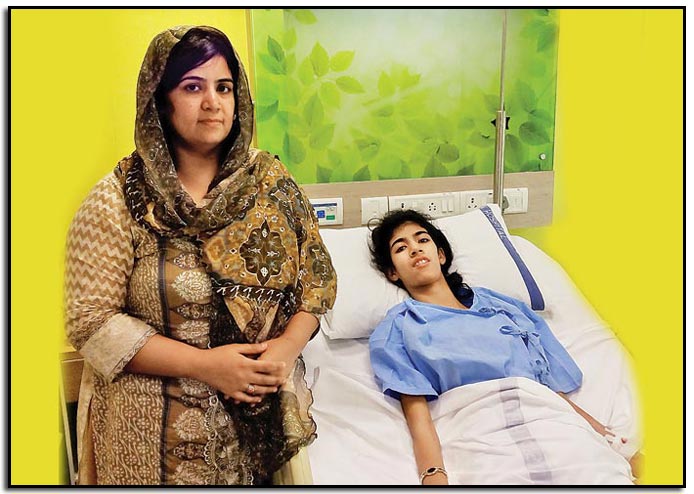 Saba and her mother Nazia in hospital, Mumbai. File photo

Indians open their hearts to Pakistani teen Saba Ahmed, who is back in Mumbai for medical treatment

Pakistani teenager Saba Ahmed, 15, returned to Mumbai’s Jaslok Hospital from Karachi on Monday, August 24, 2015, for her follow up medical treatment for the rare genetic condition she suffers from, Wilson’s Disease.

Saba’s uncle Shahid Pechuho initially brought the case to the media’s attention through his posts on the Aman ki Asha facebook group and page in April this year.

Mumbaikars and other Indians generously donated to the ‘Save Saba’ online crowd funding campaign to raise money for her treatment. The campaign, supported by many media organisations, brought in approximately INR 10,00,000 (ten lakh) that is essential for Saba’s treatment. This amount will go a long way in providing the much-needed financial medical aid for Saba.

Liver specialist Dr Aabha Nagral at Jaslok Hospital told Vrushali Purandare of the Afternoon Despatch & Courier that he was hopeful that Saba, who had earlier been treated there in April-May, would respond to new treatment. This would include new drugs as well as physio-therapy, speech therapy, and diet.

“For me she is like other patients and I am happy for Saba, she should be fine and walk out with happiness,” he said terming the Pakistani patient’s treatment in India as an “excellent example of humanity”.

“All patients are the same for me, we doctors don’t differentiate by any caste, creed or religion while treating patients,” he added.

“This really very good, and a unique example that shows the love between our countries,” says journalist Jatin Desai who volunteers with the Pakistan India Peoples Forum for Peace and Democracy, the oldest and largest people-to-people group between the two countries. “The response to Saba shows the true sentiments of the people of India and Pakistan who really care for each other. It is a good example for our politicians to learn from.”

From Pakistan, poet and journalist Fazil Jamili, President of the Karachi Press Club and Editor Jang Group of Newspapers Web Edition, commented, “This is a very good example of caring and sharing each other’s pain and passion. We would like to continue to share like this, which would result in a better and safer place to live as neighbours”.

“This was another sterling example of a cross border patient who captured Indian hearts,” commented Vrushali Purandare in the Afternoon Despatch & Courier report.

The report recalls the baby girl Noor Fatima, who came to India from Lahore, Pakistan for open-heart surgery in 2003 at a time of great tension between both countries. She “managed to unite the two neighbours to such an extent that young kids gathered outside the hospital and prayed for her speedy recovery.”

Peace-loving people on both sides pray for Saba’s early recovery and hope that in this case too, the goodwill that is generated proves stronger than the mistrust and bigotry.

Note: Wilson’s disease is also known as ‘Hepatolenticular Degeneration’. It is is caused by excess of copper in the liver cells (the hepatocytes) that is harmful and leads to liver damage. Damage to brain tissue mainly occurs in an area called the lenticular nucleus.

2 thoughts on “A shining example of humanity”