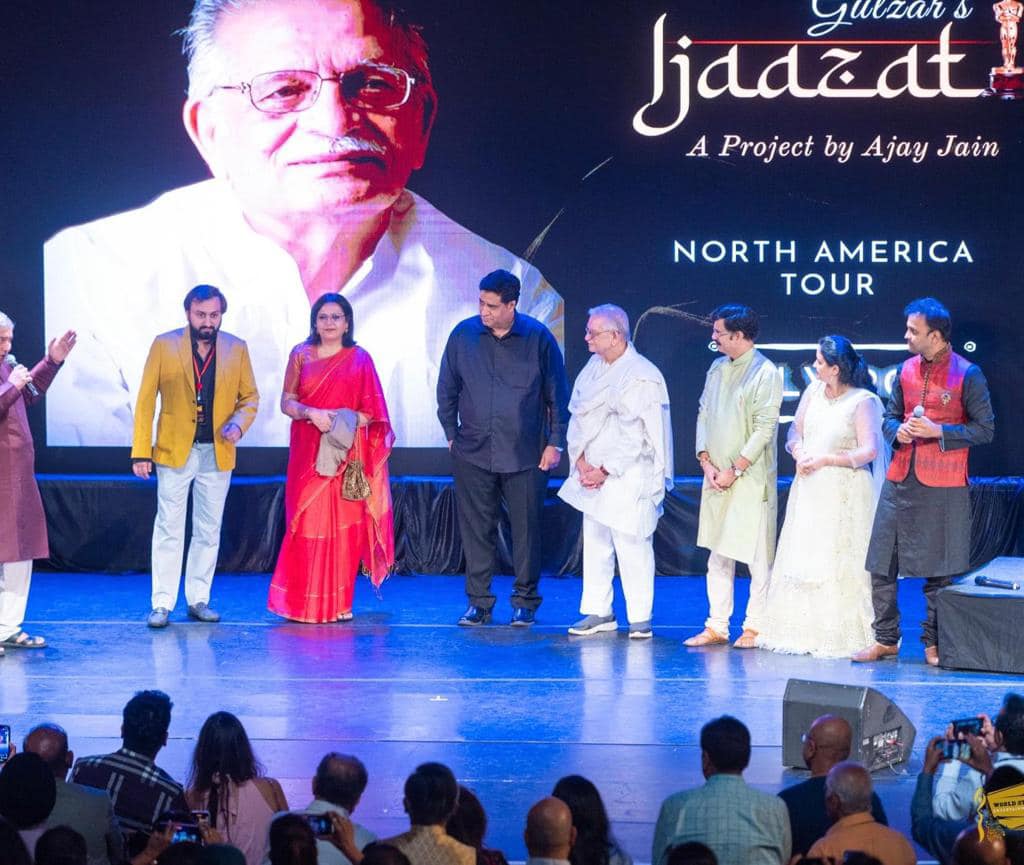 Gulzar. The name needs no introduction to any lover of Urdu or Hindi poetry — or films. Audiences across North America recently had the opportunity to see the legendary poet, writer and humanist live at a recent series of rare public appearances. For many, it was their first time seeing Gulzar in person.

One of the most remarkable things about the Mumbai-based 87-year-old is his humanism and compassion, and his courageous commitment to his roots in Dina, the village he was forced to leave behind as a teenager when it fell to the Pakistan side of the partitioned border in 1947. So overwhelmed was he at his first visit back in 2013 that he cut short the rest of his trip to Pakistan after going to Dina, saying that all he wanted was “a moment alone to sit and weep” (Aman Ki Asha, 03 April 2013)

The recent series of public events was titled Ijaazat (Permission) after the famous 1987 musical romance film directed by Gulzar. The stage series featuring the maestro himself was produced by Mumbai-based filmmaker Ajay Jain, a project that took over a year to put together.

It kicked off on 15 July 2022 in Toronto. Gulzar clad in his signature white kurta pajama was accompanied on stage by the eminent Delhi-based writer, critic and literary historian Rakhshanda Jalil, and accompanying singers Hrishikesh Ranade, Swarada Godbole and Jitendra Abhyanka from India who performed at all the shows, bringing Gulzar’s poetry to life.

The next show was in New Jersey, and after that, 17 July 2022, in Boston. That is where I was fortunate enough to catch the event, hosted by Eshani Shah, Indian-origin philanthropist and promoter of performing arts.

What a treat it was to hear Gulzar recite lines from some of his own poetry, marked with his characteristic simplicity and humility.

(Since evening my eyes have been moist, Today again your presence is missed)

Gulzar’s conversation with Rakhshanda Jalil brought out so many aspects of his life and works. He made it a point to mention all the people who have touched his life and influenced him the most in his almost 60-year journey in Bollywood. He shared enthralling anecdotes about the people he has worked with – like actor Sanjeev Kumar, composers Salil Chowdhury, R.D. Burman, Vishal Bhardwaj and A. R. Rahman, singers Jagjit Singh, Bhupinder Singh, Lata Mangeshkar, Asha Bhosle and actors Naseeruddin Shah and Meena Kumari.

Sanjeev Kumar, said Gulzar, was a talented stage actor who for some reason was inclined to play roles of older men. At 22, he played the role of a 60-year-old with six children. That is when Gulzar first spotted him. He then cast Sanjeev Kumar in the roles of older men in four hit films Parichay, Koshish, Aandhi and Mausam. Sanjeev then requested for a younger role but by then was too old to play a young hero. Younger heroines were not interested in playing opposite him despite his amazing talent. He always remained Gulzar’s first choice.

Who knew sitting in the Lynn auditorium then, that the next morning would bring news of the passing of singer Bhupinder Singh.

His evergreen songs Beeti na bitai raina, Meri awaz hi pehchan hai and many others were rendered live on stage by accompanying singers Hrishikesh Ranade, Swarada Godbole and Jitendra Abhyanka, part of the professional team from India that performed at all the shows.

The songs performed live on stage, Humne Dekhi Hai Un Aankhon Ki Mehekti Khushboo, Kajra re, Bidi Jalae re and the Grammy award-winning Jai Ho, particularly received tremendous applause from the audience. The grand finale was in fact the live rendition of a medley of hit songs based on Gulzar’s lyrics.

Starting his writing career with a single song for Bimal Roy’s 1963 film Bandini, Gulzar has come a long way over the past six decades. He wears multiple hats with ease – poet, lyricist, author, screenwriter, film director, dialogue writer, producer and more. Along the way, he has received 36 awards, including 22 Filmfare Awards.

Gulzar extensively discussed his directorial debut with Mere Apne, and also talked about his enduring classics of Hindi cinema like Parichay, Koshish, Aandhi, Mausam. Khamoshi, Angoor, Ijazat, Machis, Dil Se and others. These are memorable not only for their storytelling, but also for their unforgettable songs.

One of his oft-repeated philosophical refrains was that the present is never complete without reflecting on the past. Not surprisingly then, the cinematic device of “flashback” formed an integral part of his narrative technique in films like Khushboo, Achanak, Aandhi, Mausam and Lekin.

Nor does he ever reduce the complexities in life to formulae. In the violence-ridden 70s, his films were refreshingly different. As Rakhshanda Jalil remarked, Gulzar’s work always has a piquant appeal because it is peppered with a lyrical, but psychologically adept, examination of human sensibilities.

From his first break as a lyricist in Bandini, Gulzar’s imagery started unfolding immediately with Mora gora ang lai le, while staring at the moon. It became only richer with each passing year and un-surprisingly, even established performers wanted to be associated with him to enhance their visibility.

Gulzar and Rakhshanda also spoke extensively about the production of the Doordarshan national TV series Mirza Ghalib, scripted and directed by Gulzar in 1988, with Naseeruddin Shah in the central role of the iconic poet. Jagjit Singh and Chitra Singh were an integral part of that production. Gulzar attributed the huge success of the series to three people – Naseeruddin Shah, Jagjit Singh and Mirza Ghalib himself.

At the end Gulzar invited questions from the audience, responding with his characteristic wit and honesty. To the question of when he plans to retire, Gulzar said that it’s all about his “thirst”. The day he feels that he no longer has the thirst to create, he will stay at home.

About his “kaleidoscopic” mindset he explained that he loved to see the same object, place, person from different angles and positions. The same things look different, just as they do through a kaleidoscope.

Gulzar’s poem Nazar Main Rehte Ho, sung by Shankar Mahadevan and Rahat Fateh Ali Khan, became the anthem for the peace campaign Aman ki Asha launched in 2010. His moving tribute to the legendary Pakistani ghazal singer Mehdi Hasan around the same time continues to speak for all those who yearn for a visa-free regime in the region:

(Eyes don’t need a visa, dreams have no frontiers, With closed eyes I often cross the border to meet Mehdi Hasan)

Gulzar’s poetry continues to win more attention than his extensive directorial work. But most remarkable is his unquenchable thirst and capacity for work. A creative fountainhead like Gulzar cannot slow down. Not as long as there is a full moon night in his sight and a kaleidoscope in his mind.

Karachi-born, Boston-based Siraj Khan is a connoisseur of Southasian film music, a believer in using art and culture to build bridges between people and places. A global finance and audit specialist by profession, he has written scripts and directed concerts across the USA, UK, Southasia and UAE. He sits on the board of several non-profits and charities in USA, Pakistan and India and has been recognized for his work towards women’s empowerment and services to children and youth. This is a Sapan syndicated feature available for use with attribution to Sapan News – www.southasiapeace.com

The years that were: Let lessons from the past inform the present Read well. Write well. Play well