A theatre activist for India-Pakistan peace 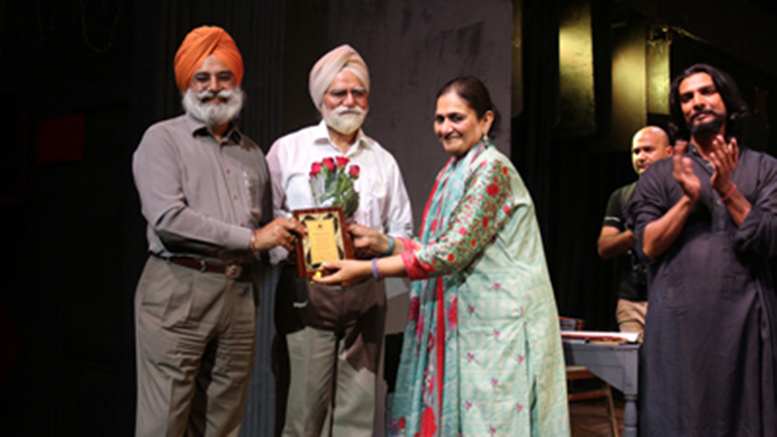 The year 2018 has been an unfortunate one for Pakistan’s peace and human rights activists so far. In February, we lost Asma Jahangir, the icon of democracy, human rights and peace movement. On 27 April, Madeeha Gauhar, another staunch supporter of peace and understanding between India and Pakistan passed away. Her death is a huge loss given the wonderful work she was doing using her theatre platform, Ajoka, a name that has become synonymous with theatre for social change.

I was in Lahore for my PhD fieldwork on India Pakistan People’s Forum for Peace and Democracy (PIPFPD) when I first met Madeeha in February 2012. As a founding member of PIPFPD and a pioneer of India-Pakistan theatre collaboration through Ajoka, she was on top of my list of interviewees. I left a message on her mobile number informing her about my thesis and request to interview her.

Within a few minutes, I received a call from a Lahore landline number and I recognised immediately Madeeha’s beautiful voice, being a fan of her plays on PTV and of Ajoka. She said she was extremely busy preparing for a forthcoming play but could not refuse me as I was working on a topic close to her heart. When we met, she shared brochures and DVDs of her plays and details of Ajoka’s collaboration with Indian theatre activists.

Madeeha remained actively engaged with PIPFPD and the India-Pakistan peace movement throughout her life. She was a frequent traveller to India and had produced plays in several major cities of both countries. Additionally, she organised the first ever India-Pakistan theatre festival in Lahore in 2003.

During this festival, theatre groups from both sides of the Punjab jointly launched the All Punjab Performing Arts Network (APPNA) and decided to organise an annual joint Panj Paani (Five Rivers) festival in Lahore. The Panj Paani festival was held in Lahore from 2004-2008. Due to security concerns, it was transferred to Amritsar in 2009. It has not taken place since then due to worsened India-Pakistan relations and difficulty in obtaining visas.

Six years later, Ajoka organised the first Humsaya (neighbour) festival in collaboration with Routes 2 Routes in New Delhi, September 2015, followed by one in Amritsar in July 2016. The Festival was organised both in India and Pakistan in 2017 to commemorate the 70-year anniversary of the partition of India — in Amritsar in March and in Lahore in October. It included a special joint India-Pakistan production Anhi Mai Da Sapna (Blind Old Woman’s Dream), reflecting the agony and suffering of a whole generation that was dislocated in 1947. Directed by veteran Indian director Usha Ganguli, the author was playwright Shahid Nadeem, Madeeha Gauhar’s husband.

A scene from Dara

Launched by a group of friends including Madeeha in 1983, Ajoka was termed “theatre for social change”. They started staging resistance plays privately at small community gatherings and in the lawns of private houses as theatre hall owners were scared of the military government. Ajoka’s first official play, Jaloos (the procession) was an adaptation of famous Indian playwright Badal Sircar’s Panjwan Chiragh (The Fifth Lamp). It was performed in Lahore in 1984 in lawn of her mother’s house defying the censorship rules of the then military government of General Ziaul Haq. In the late 1980s, the German cultural centre Goethe Institut, allowed Ajoka, that Madeeha and Shahid ran together by now, to regularly stage productions in its spacious back lawn in Lahore.

Ajoka’s first Indian trip came in 1989, after Safdar Hashmi, an influential voice in political theatre in India, was murdered in Delhi during a performance of his street play Halla Bol (Raise Your Voice). Safdar Hashmi’s theatre group Jana Natya Manch invited Ajoka to the theatre festival organised to pay tribute to the murdered theatre activist. Ajoka performed its play on bonded labour ‘Itt’ (Brick) at Delhi’s Mandi House. The following day, Madeeha recalled with amusement, The Times of India carried a front-page report declaring that Pakistan-India theatre collaboration had arrived.

Ajoka has produced several plays on the 1947 partition and the peace theme, including an adaptation of Sadat Hassan Manto’s Toba Tek Singh, in1992. The following year, Shahid Nadeem wrote Aik Thi Nani (Once There Was A Grandmother) for Ajoka, based on the real-life stories of the acting career of two sisters, acclaimed famous Indian actress Zohra Sehgal and Pakistani theatre artist Uzra Butt, who were separated due to the partition.

In 2015, Ajoka launched a two year ‘Theatre for Peace programme’ in collaboration with two Indian theatre groups, Manch Rangmanch from Punjab headed by Kewal Daliwal and Ranga Karmi from Kolkata. The aim was to organise theatre seminars in New Delhi and Karachi on theatre in times of peace and conflict. The first seminar of this series was organised on 18 September 2015 at the Jawaharlal Nehru University, New Delhi. The seminar was chaired by veteran peace campaigner Pran Nevile and moderated by Shahid Nadeem. The panellists included the Hindi theatre director Usha Ganguli, Punjabi playwright Kewal Daliwal, and professor of theatre/performances studies Dr. Ashish Sengupta, besides the famous Pakistani playwright Asghar Nadeem Syed and Madeeha Gauhar.

Ajoka is also conducting a series of theatre workshops with the youth to promote the cause of peace and justice. The first such workshop was held at the Forman Christian College University, Lahore in early October 2015 followed by a similar event in Peshawar in the last week of October 2015. Various theatre experts dealing with different areas of production like acting, singing, playwright conduct the workshops, attended by students and young theatre and civil society activists. The most recent in this series was a five-day theatre workshop at the Punjab Institute of Language and Culture, Lahore, March 6-10, 2018.

While no government of Pakistan awarded Madeeha any kind of honour, at international level her work was well recognised. In 2006, she became the first Pakistani to receive the prestigious Prince Claus Award for her leadership role in Ajoka. She was also among the Pakistani women included in in the thousand women peacemakers nominated for the prestigious Nobel Peace Prize in 2005

Madeeha was born in 1956 in Karachi to famous social scientist and anthropologist Khadija Gauhar. After doing her masters in English Literature in Pakistan, she did another Masters in Theatre from University of London. Her younger sister Feryal is also a television celebrity and an acclaimed writer. Shahid Nadeem’s daughter Savera Nadeem is also a well-known television actress, director and producer. Shahid and Madeeha’s older son Nirvan Nadeem played the role of legendary freedom struggle hero, Bhagat Singh in Ajok’s Mera Rangde Bansanti Chola (Colour my cloak saffron).

Madeeha is survived by her husband playwright Shahid Nadeem, two sons Sarang and Nirvan and her Ajoka family. People like Madeeha never die as their work remains forever. In case of Madeeha this has more weight as she has not only left the work which she could accomplish in her lifetime but also, she also leaves behind Ajoka which has now become Pakistan’s biggest theatre organization.