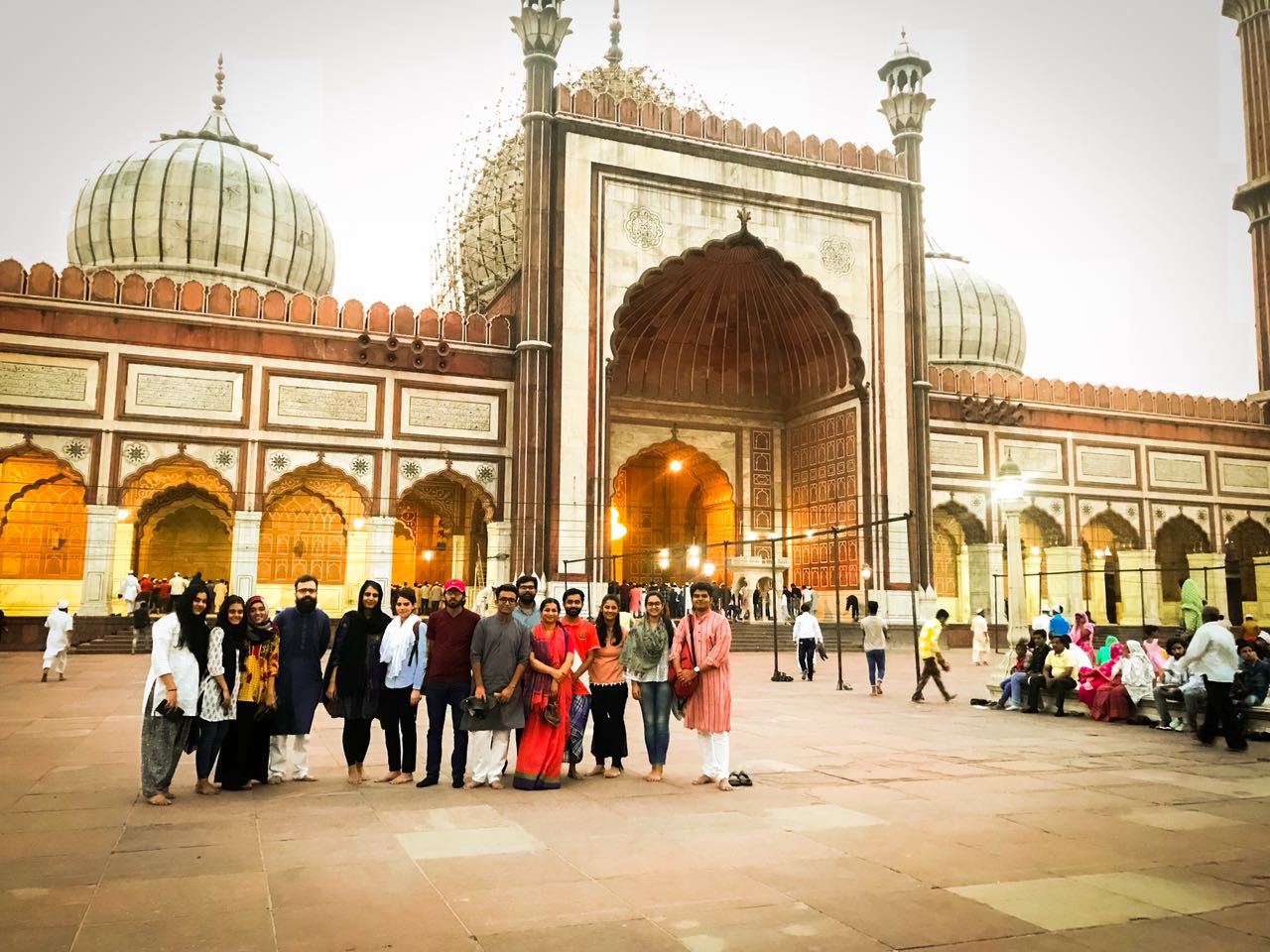 Visit to the Jama Masjid, Delhi

By Parvaz Lamba and Siddhartha Pantula

On a hot Delhi evening, we and our professor waited anxiously outside the Ambedkar Bus Terminal to receive some special guests. Battling hordes of mosquitoes we saw many families crowded near the entrance, eager and excited to see their loved ones.

Our anxiety ended when we saw the Pakistan Tourism Development Corporation bus sweep into the bus terminal, escorted by the Delhi Police. As the passengers started to disembark, we heard some children shout, “The Pakistanis have come”. Indeed the Pakistanis had arrived.

Our eyes lit up as we saw our guests, Professor Ali Qasmi and his team of ten students from the Lahore University of Management Sciences (LUMS), head towards the entrance gate. After exchanging warm greetings, we sat in a bus that was to take us to our destination: O.P. Jindal Global University, Sonipat, about an hour-and-a-half drive from Delhi.

We always wondered what Pakistanis are like and what they think of India and people on this side of the border. With relations sour between these two states, it is very difficult to personally meet them and talk at length of our lives.

The course that Prof. Ali Qasmi and Prof. Pallavi Raghavan designed, Foundations of South Asian History, gave undergraduates in both institutions that opportunity to interact with students from the other side. That was the biggest pull for us to enrol in it.

The course took us on a whirlwind tour of the shared past of both India and Pakistan; we discussed all the important phases of our history from the Indus Valley Civilisation to the Partition in 1947.

Given our shared history, we assumed that the history books must be same. That is not the case. Our histories start at different events and emphasise very different narratives. Through this course we got to understand Pakistani history, which was very fascinating for us as Indian students. The fabric of history is shared but prints on it are different.

The visit of the student delegation from LUMS to India, and OPJGU, was the culmination of our course.

Our Professor had told us how similar students from both sides are, but it was only when they came here that we realised just how similar. There cannot be a comparative-index to find similarity or dissimilarity when we are same at the roots. We have the same likes or dislikes when it comes to our university, our professor and even our personal lives. There are the same inqalibi urges, and curiosity about each other’s countries, and similar cultural sensibilities.

We had already interacted online during the course. So when we actually met, it was as if we had known each other for a long time, even though their visit was so brief.

The students were from different places in Pakistan: Lahore, Karachi, Rawalpindi, Sehwan Sharif and other places. We felt an immediate connect with them despite the distinct ethnicities.

Over the three eventful days that the Pakistanis spent with us on campus and in Delhi, we had lively interactions with each other. Although we understood Urdu and Hindi, the difference was in the scripts of both the languages, something our Course taught us about earlier.

In Delhi we visited prominent landmarks like the tomb of the Mughal emperor Humayun, the Dargah of Nizamuddin Auliya, the tomb of the poet Ghalib, Jama Masjid and Sisganj Gurudwara. Again, there were comparisons of Delhi’s Jama Masjid and the Badshahi Masjid of Lahore, one built by the father and the other by the son but now situated in different countries.

Our Pakistani friends also drew comparisons between Old Delhi and Old Lahore, finding the sights, sounds and smells so familiar. We had a gala time riding in rickshaws through the jam-packed roads near Jama Masjid, and a hearty meal at Karim’s. But Delhi, we learnt, lost it to Lahore when it came to the night life.

Some of the students in the delegation have roots in India. Their families had migrated to Pakistan after 1947 and settled in cities like Karachi and Lahore. They still have distant relatives in India.

Besides discussing Partition which our generation seems keen to revisit, we talked about our personal lives, customs and traditions, politics, cricket, movies and music. From Nawaz Sharif and Modi, to Deepika, Shah Rukh, Atif Aslam, Imran Khan and Mahira Khan, to Faiz, Habib Jalib, nobody escaped our scrutiny.

On the third and last day of their visit, some of the Pakistani students grabbed some time to visit the bazaars of Chandni Chowk. Dariba Kalan and Nai Sarak served them well. That evening, we had our final combined class at JGU. We could not believe that we all were finally sitting in one class.

Screenshot from one of the collaborative classes at LUMS, Lahore and OPJGU, Sonipat, held via Skype.

Prof. Pallavi and Prof. Ali initiated an informal discussion in which we took part, along with some other faculty of JGU. We students talked about what we learnt from the course while the professors were bombarded with questions that they patiently answered. We remember how happy a JGU faculty member felt when he met a Pakistani student who hailed from the same place as his ancestors.

At Jindal’s food court, the cashiers were shocked to know that the Pakistani students were talking to them in Urdu, not Hindi. Intrigued and interested, they gave the Pakistani students free smoothies. When the Pakistanis showed them their currency, which they requested to keep the notes as souvenirs. “It was an overwhelming experience, and when we left after taking selfies with them, we felt so full of love that the idea of leaving in a few hours teared us up,” said Maryam, a student form LUMS.

On the last evening, we went to Delhi’s famous Dilli Haat. With products for sale from all over the country, Dilli Haat itself represents a mini India. The Pakistanis enjoyed shopping there and we had dinner, rather ironically, at the Jammu & Kashmir stall. Well, we might have differences over Kashmir, but we did enjoy the food at the stall!

We spent a lot of time together during their visit. The lawns in JGU were witness to our candid conversations. We not only talked about all the good things but also about the contentious issues of both our nations.

We agreed that the new generations of Indians and Pakistanis have an important role in establishing peace between the two countries and for that to happen, we need more people-to-people interactions. We promised to see each other again and communicate regularly. The morning the Pakistanis left JGU seemed surreal; the parting was an emotional one we shall not forget so easily.

As we recollect the time spent with them and write about it, we turn nostalgic. We have fond memories of one evening when we sang the song Afreen together. Indians and Pakistanis singing together in unison seemed so wonderful, we believe the world would love to hear it. Wouldn’t it?

Parvaz Lamba is a fourth year student of OPJGU’s integrated law program with an interest in human rights, peace and conflict, and cultural studies. Siddhartha Pantula is a first year Masters student of the Course Diplomacy, Law and Business (International Relations) at OPJGU, focusing on South Asia as his academic area of interest.