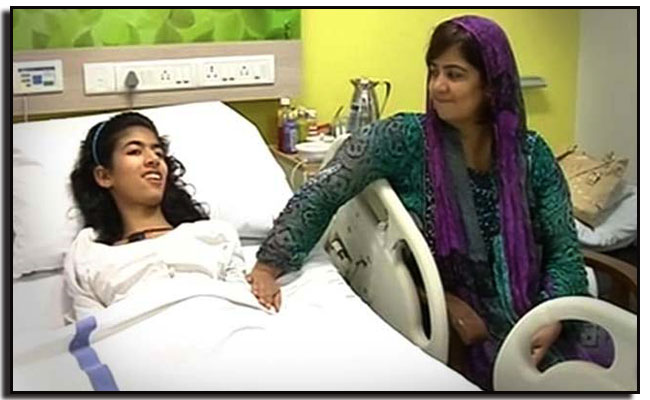 Saba and her mother Nazia in hospital, Mumbai. File photo

The icy Indo-Pakistan ties notwithstanding, Mumbai welcomed an ailing Karachi teen who flew into the city for treatment on Monday afternoon.

Fifteen-year-old Saba Ahmed, who suffers from Wilson’s disease, was immediately taken to Jaslok Hospital, Peddar Road, where a city-based NGO made the initial deposit payment using the money it had gathered from its crowdfunding initiative launched on Independence Day.

Times of India found that at least one donor had given a cheque of Rs 1 lakh for the teenager’s treatment. Liver specialist Dr Aabha Nagral, who has been Saba’s doctor since the teenager’s last visit in April, said many people had called, wanting to make cheque donations.

The Bluebells Community, the NGO that helped Saba’s mother, Nazia, raise funds, too, has been getting calls on cheque donations. “We launched a crowdfunding effort that allows people to make online payments, but many who are not comfortable with that option want to give cheques,” said Shabia Walia from the NGO.

The crowdfunding drive, which aims to collect Rs 10 lakh for Saba’s three-month-long stay, has so far collected Rs 2.6 lakh. “Saba’s face lit up on seeing familiar faces… Her mother, Nazia, told me that Saba has come to love India,” said Walia.

Saba, who was diagnosed with Wilson’s disease over a year back, came to Mumbai in April with Rs 80,000 for treatment. At that time, the Bluebells Community raised over Rs 7 lakh. After Saba returned to Karachi, her condition worsened. She is at present bedridden and cannot speak or swallow food.

“A medicine that we regularly use to treat Wilson’s disease has not worked for Saba and we need to get another medicine that is expensive and not easily available,” said Dr Nagral. She has written to the Wilson Disease Association based in the US to help with the new medicines that could cost over Rs 50,000 for a month.

“Physiotherapy is as important as medicines for patients with Wilson’s disease. We will immediately start with it,” she said.

The Bajrangi Bhaijaan moment A shining example of humanity