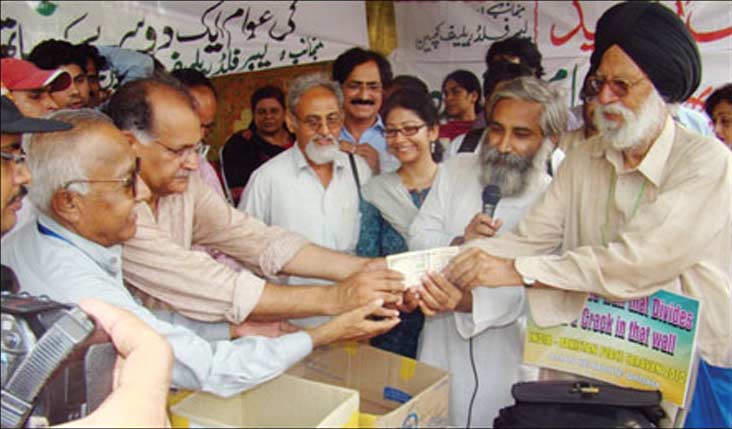 Aman ke Badhte Qadam, an Indo-Pak peace caravan, started from Mumbai on July 28, 2010, and concluded successfully in Lahore on August 15, as planned. This was the first major people’s initiative for peace between the two countries after the terrorist attack on Mumbai on November 26, 2008.

We chose Mumbai as the origin of the Caravan to convey the message that even after the ghastly act witnessed by people there, we wanted peace and friendship with Pakistan. People along the route warmly welcomed the Caravan, in all the states we passed through – Maharashtra, Gujarat, Madhya Pradesh, Rajasthan, Delhi, Haryana and Punjab.

We merged with the annual programme to jointly commemorate Pakistan and India Independence Days with music and candle lighting at the Wagha border. Hundreds of thousands of people attended the musical night on the Indian side of the border, which featured the charismatic singer Satinder Sartaj this year. Sartaj was as dynamic in his actions as his poetry. He covered the issues of open borders between the two countries, peaceful resolution of disputes, disarmament and dangers of nuclearisation and oneness of people, the objectives of the India Pakistan Peace Caravan and all such people’s peace initiatives.

On the Pakistan side, the Caravan left from Karachi on August 7, 2010, delayed for a few days after the original schedule due to the situation in Pakistan. The Caravan had to be abandoned by the time it reached Hyderabad as the flood situation had become critical by then. However, Pakistani delegates did participate in the events in Amritsar on 13 and August 14.

Ten Indian peace activists came to Lahore the following day, and participated in the fund raising camps at Regal Chowk on Mall Road. Together, we raised more than a lakh of rupees that day, including a contribution of Indian Rs 25,000 that we had brought from India. We promised that when we returned to India, we would raise more money there for flood victims in Pakistan.

The response that we Indian peace activists got on the streets of Lahore was tremendous. It signaled the changing mood in the sub-continent in which people and governments want to work together more than before. The globalising world and the increased threat of terrorism is forcing the governments into closer cooperation.

At a meeting later that evening we agreed to continue with Aman ke Badhte Qadam. Keeping in view the immediate need in Pakistan, we offered to send a team of Indian doctors and trucks of medicines across. The Pakistani organisers of the Caravan took the responsibility of hosting such a medical team.

We urge the governments to use this opportunity to relax their visa regime and allow teams of doctors and relief workers from India to enter Pakistan and help carry out relief work. The city-specific visas that our governments are issuing won’t do for any meaningful relief work. Maybe this is a blessing in disguise, an opportunity for the two governments to reconsider their policies of restricting travel between the two countries.

Given a chance many Indians, especially those associated with civil society organizations, would like to visit Pakistan and contribute towards flood relief efforts. We hope that the Pakistani government is magnanimous enough to allow as many Indians to come into their country as would like to go. Even in other circumstances common people who want to visit Pakistan from India and vice versa, when denied visas or the permission to cross Wagha border from their own Home/Interior Ministries get very disheartened. Most give up their efforts in preliminary stages and never make it to the other country.

The Indian government has made a generous offer of aid towards flood relief to Pakistan. The government in Pakistan has accepted it after some delay. It is a pity that US had to step in to urge Pakistani government to accept the Indian offer. It is a good example of how Indian and Pakistani governments because of their lack of positive initiatives have allowed a larger role for the US in this area than necessary. US interference anywhere in the world has in general not been beneficial for the people.

The Pakistani economy has been dependent on international aid for a long time. There was never a policy, as in India, to strive towards self-reliance. Unfortunately, India is also discarding its sovereignty and is increasingly more dependent on international aid, although it also provides financial aid to countries like Afghanistan. So, if Paksitan needs help that India can provide, it should be mutually beneficial. It will definitely reduce the atmosphere of antagonism that prevails in official interactions. Moreover, for Pakistan the relationship with India will be more democratic than with the US.

The writer is a peace activist based in Lucknow, India. Email: [email protected]

Sufi Moon contribution: Enjoying the benefits of the 'flattening world' - together