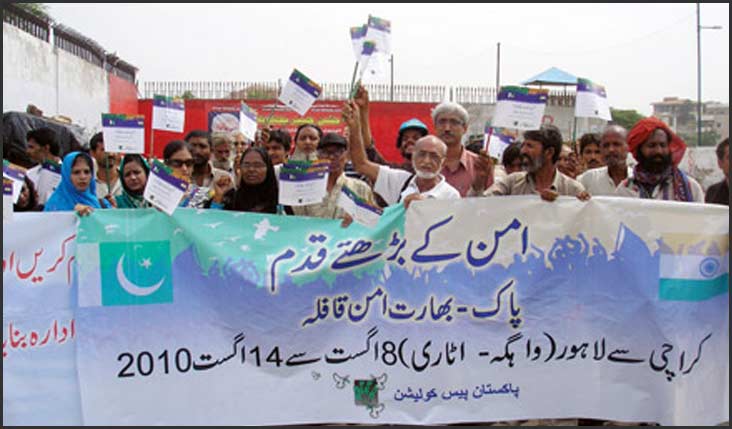 The idea of a people to people march for peace between India and Pakistan was “suggested by our Indian friends”, said Karamat Ali, waiting for the inauguration ceremony of ‘Aman Ke Badhte Qadam’ to start at Karachi Press Club on Aug 7.

Talking about the people’s past and present efforts for peace Ali, Executive Director, Pakistan Institute of Labour Education and Research (Piler), said he believes that Pakistanis have internalised the tension “as they are brought up to believe that India is their permanent enemy. Sadly that is the case there (in India) as well.”

This has not stopped him, and like minded people like him in Pakistan and India, from trying to change this mindset and continuing the struggle for peace.

“There was continuing animosity between the two governments at the time,” explains Ali. “But that has been the case for much of our history. People on both sides have continued to hold gatherings and meetings despite official level tensions.

As the drizzle began and the event managers thought of alternate seating arrangements, Ali explained the need to pursue peace in India and Pakistan. “Our two countries, naysayers insist, can never be friends. We are actually fighting well entrenched perceptions,” he says, smiling. “This is what is causing internal tensions and making people hesitate to trust each other, though that is urgently required.”

Most of the countries in the region that gained independence after Pakistan have a relatively better standing in the world, he notes. “This is partly because of their focus on finding solutions to their problems. They focused on the immediate needs of the people, like education and health. That investment paid off hugely for them, unlike India and Pakistan which focused on getting arsenal against perceived threats.”

What’s needed is a paradigm shift on the notion of what brings security – weapons, or health, education and employment. The floods that have hit Pakistan show that “even being a nuclear power we cannot fight nature, or stop it from hitting our villages and taking millions of lives. The outlook that the security of the state is much more important than the security of its people has backfired. The people of Pakistan bear the brunt of it.”

The peace caravan in Pakistan set off on Aug 9, and is collecting funds for the flood hit areas before meeting its Indian counterpart on August 13 at a ceremony at the Wagah-Attari border. In India, the peace caravan started off from Mumbai on July 28.

A koel's plea Water Boiling Over Across LoC