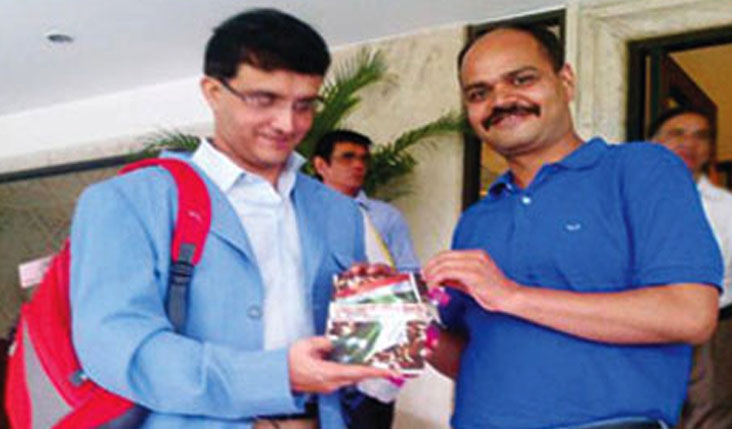 Shivendra Kumar Singh is a Delhi-based journalist, working as a special correspondent for ABP News (formerly Star News) since 2007. He started his career in 1999 with Hindi daily “Amar Ujala”, and later joined Zee News where he worked for almost seven years. He started covering cricket in 2004 with the historical tour of Pakistan and also covered the Hockey Champions Trophy in Lahore. He visited Pakistan again in 2005 and 2006. This book contains a memoir based on those four visits, marked for him by the love and affection of hundreds of ordinary people. The book includes memories shared by cricketer Irfan Pathan.

There is a Pakistan which lives in my heart, a Pakistan where I have a family, there are no blood relations but some relations go beyond that. The roads there and the alleys, I can well recognize and it seems they know me as well. I have so many cherished memories of Pakistan which are simply unforgettable.

Around 12-13 years back, I met well- known writer and actor Piyush Misra at the place of Jeetendra Ramprakash, a known anchor and a friend of mine. Piyush recited a few lines which I would like to quote here… Later he recorded this beautiful song for Coke Studio as well:

(Somewhere in Lahore, I reached in a town, somewhere in a narrow alley, was it the 4th house of Resham Gali, to which people call a different nation I reached that Pakistan… writing this letter from India I reached in the arms of Husna.. Oh Husna…)

When I heard these lines for the first time, I felt a jolt in my heart. Today after over ten years, when I decided to write this book, I called up my friend Honey Trehan in Mumbai to note these lines and listening to these lines over the phone I was again in the same state… just NUMB. I couldn’t bother Piyush Bhai again to recite the lines as he was in hospital for not being well.

I travelled to Pakistan four times between 2004 and 2006. It’s close to seven years now. Over the last seven years, the situation there has gone from bad to worst. Blast in Lahore, blast in Rawalpindi, blast in Peshawar, Multan, Islamabad, assassination of Benazir Bhutto, attack on Sri Lanka cricket team and then very recently the terrorist activities after the killing of Osama Bin Laden in Pakistan. Everyone asks: who will go to Pakistan and why should one?

Yet I still dream of going to Pakistan along with my family, to meet the people there who have given me so much love and affection that if I start writing on it, I would need a separate book. I remember every moment of my time in Pakistan. I remember every incident that took place while I was there as a journalist. Still remember those roads, those crossways. Someone was recently telling me that they have made a flyover at Kalma Chowk, I remember the Kalma Chowk sans the flyover. I remember MY PAKISTAN.

The Indus People:
Toward the Civilizational Synthesis of India and Pakistan
By Girja Kumar
Vitasta, New Delhi, 2012

The Indus People is an unusual cultural history of the subcontinent, with the book viewing events from the perspective of people in this part of the world. “It is a celebration of common heritage, as well as of the Aman ki Asha movement now spreading its wings in India and Pakistan,” says the Delhi-based writer, octogenarian Girja Kumar, who was born and grew up in Dera Ghazi Khan. “Let the book be viewed as the mascot of Aman ki Asha. More importantly, especially in its seventh chapter, there is an implied clarion call for the fledgling feminine movement of Pakistan, embedded in its historical past, with roots going deep into the Mahabharata times.”

Excerpt
‘The Indus People’
(from the backgrounder)

Michael Edwardes had praised the old Dera Ghazi Khan as ‘one of the most lovely spots in the Punjab’. He called it the ‘City of Palms’. The Kasturi canal flowing in the eastern corner of the town was the Jewel in the Crown. It was fringed with thickly planted mango trees and gracefully-laden date palms. The sweet home represented the Balochi spirit in its essence and it was undoubtedly infectious.

The book is however no personal memoir. It is not about the diaspora; it is no litany or dirge about past memories. The present book is a journey of self-identity and the discovery of India’s past beyond its political frontiers. It is largely a subcontinental odyssey beyond borders. The idea is to reinforce civilizational concept of shared experiences and values through time between India and Pakistan. It is a counterpoint to Aitzaz Ahsan’s, The Indus Saga (1997).

The human mind is an inexcusable and strange concoction of the creator with multiple and diffuse loyalties. Among the multiple identities, the brand Indus stands out from the rest of them. The Saga of Sindhu / Indus is unique in the civilizational history of the Subcontinent. Rigveda called it Sindhu with free flowing ‘divine waters’. The banks of Indus are dotted with Sufi khanqnahs. It is sacred to Hindus and Muslims alike, who call it ‘River God’ and ‘Living Pir’.

Even today there is no river in the Subcontinent to rival its wayward grandeur. Its destructive capabilities are well-known. No wonder, F.Max Muller has called it ‘Constructive – Destructive’ Sindhu. Annemarie Schimmel calls it ‘the River of Poetry’ doling out ‘Divine Grace’ and ‘Divine Wrath’ simultaneously.

Saraiki language is the essential glue that holds the Indus people from Cambellpur to Sukkur together. It is one of the oldest Indo-Aryan languages with variants like colorful names such as Multani, Hindko, Jhangi, Potohari and Sindhi Siraiki. The language is very much responsible for the enhanced Saraiki wasaib consciousness.

The adoption of Pali and Buddhism were indicative of a social revolution that swept North India. Similarly, Saraiki literary tradition initiated by Baba Farid through adoption of the mother tongue Saraiki as medium of expression was the engine that fired the pan-Indian liberal Sufi tradition as the people’s faith. The waters of Indus River and its tributaries like Chenab, Ravi and Sutlej seem to be aligned with Sufi and Bhakti movements.

Nearly a dozen prominent literary figures including Shah Hussain, Bulleh Shah and Waris Shah are of Saraiki birth and employed Saraiki language as their medium of forceful expression. Their verse continues to reverberate in the cultivating fields, in the zenanas and red-light districts, as well as in the cultivated saloons all over the place. Between them, they spanned seven centuries in all.

Liberalized visa accord with India approved by Pakistan Testimonials