An app for India Pakistan love 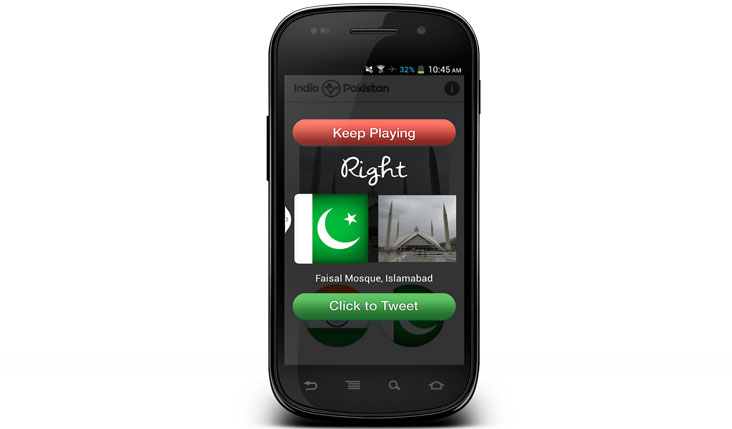 In August 2013, as many on both sides of the border jointly commemorated India and Pakistan’s Independence Days, Amrit Sharma a young software engineer turned project manager turned ‘digital nomad’ launched IndiaLovesPakistan.com. The aim: “to add the human element into the India Pakistan relationship”.

Now Sharma, 28, has launched an Android app called “India or Pakistan” through a self- funded tech startup (IndiaOrPakistan.com).

“The goal,” he says, “is to highlight the similarities between India and Pakistan, learn about some monuments, and further humanise the Indo-Pak relationship.”

The app features photos of people, monuments, streets and markets. Users answer whether they think the photo is of India or Pakistan, see the correct answer, and get the next photo.

Sharma is inspired by a 2012 TED talk by the Israeli graphic designer Ronny Edry (Israel and Iran: A love story?  http://youtu.be/6Lp-NMaU0r8). When war between Israel and Iran seemed imminent, Edry had shared a poster on Facebook of himself and his daughter with the message: “Iranians … we [heart] you.” Other Israelis joined him, and Iranians responded warmly. The idea sparked many Facebook communities like “Israel loves Iran,” “Iran loves Israel” and even “Palestine loves Israel.”

Hearing Edry’s talk, Sharma realised that thanks to social media, “the world is a village with no degrees of separation”. One person with the right idea can be like lighting a candle in a dark room.

“What’s more is that a candle can light other candles without losing any of its brightness. That’s what we’re seeing with more and more social ventures – like DearNeighbour, Aao Dosti Karein, Aaghez-e-Dosti, and soon to launch Sarhadpaar by beyondviolence.org,” says Sharma. “Over time, it becomes abundantly clear that the silent majority in India and Pakistan want to live by each other’s happiness, not each other’s misery.

Born in Delhi and raised in Kathmandu, Sharma lived in Minneapolis for ten years. He has always had international friends, “including from the Pakistani embassy, from kindergarten till university, I realized early on that people are people, even if the politics between their countries is complicated and at odds”.

One thought on “An app for India Pakistan love”