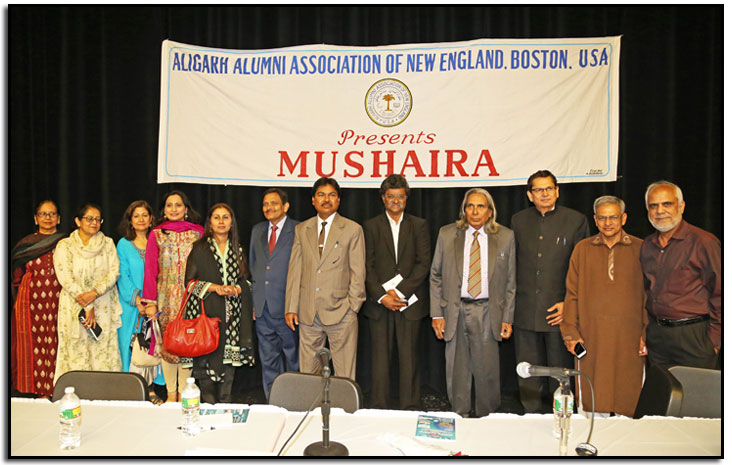 Pakistanis and Indians from the greater Boston area flocked in large numbers to an event at a high school auditorium in Boylston town last week, brought together by their love for Urdu and poetry.

Dr. Syed Mohsin Alvi, President AAANE, in his welcome speech began the event “with hope for a lovely evening filled with intellectual exchange”.

Local poet Iqbal Danish who has had the honor of reciting his Kalam with Ahmed Faraz, Rahat Indori and Iftikhar Arif invited local poets to the podium, including Maarij Kirmani, Samina Khan and Fouqia Mushtaq.

An attentive audience heard Samina Khan, an audiologist by profession, as she recited her verses.

Another amateur poet, Fouqia Mushtaq, a doctorate candidate in Neuropharmacology, clearly takes after her father Syed Mushtaq Hussain, a renowned poet in Pakistan.

A warm welcome awaited Maarij Kirmani whose family hails from Lucknow and brought the Urdu culture — Adaab-e-Lucknow — to Massachusetts.

Sunil Kumar Tang evoked laughter with his witticisms and puns as he introduced the poets from India and Pakistan. They included Rajesh Reddy, born in Nagpur, who started his career as a Hindi journalist but delivers Urdu as if it is his first language. His recitation of couplets from his ghazals was well received:

Behind the scenes: the AAANE team that made it happen

Sunil Kumar Tang already at the podium sharing his gift of the gab was rendered temporarily speechless Professor Sahar Ansari introduced him as the next poet. He is best known for his humorous poetry but the philosopher and the ambassador of peace comes through regardless. ”

He jokingly added that hailing from Bihar he can borrow verses from other poets and call it his own, like the poet who recited Ghalib’s ghazal at a mushaira. When confronted, he retorted, “Kon Ghalib, aaj tak kissi mushaira to nahin dekha”.

With Nizamat back on his shoulders, Tang invited Tahir Faraz to the stage. Faraz belongs to Rampur district in UP and writes poetry in Urdu and Persian. kept the mood lively and interactive. When Tahir Faraz recites his poetry in melody, the voice as well as the verses are mesmerising.

Responding to a request from the audience, Faraz presented his signature work, “Maai”. He told me that Anand Raj Anand, the famous music director in Mumbai had asked him to write about Mother and “and deliver it with Tarranum”.

“Whenever I hear Maai, it brings tears to my eyes,” commented Mohammad Khalid, past AAANE executive member.

Inviting Prof. Sahar Ansari to the stage, Iqbal Danish described him with finesse:

A view of the audience

As Prof. Ansari went to the podium, audience members jumped to their feet, continuing the applause for some time. His verses were well received, as expected.

In person, he is humble and down to earth, a true scholar with full command in Urdu. Considered to be an authority in Urdu and a viable critic, many poets seek his constructive criticism on their work.

As the event ended, the audience appeared to be thirsty for more. But, as the saying goes, all good things must come to an end.

“A well-balanced mushaira, well organized and it had everything, laughter, tears and seriousness,” commented Mohammad Khalid, past AAANE executive member.

Indian music and Urdu poetry lovers in the area can look forward to the forthcoming event announced by music enthusiast and writer Siraj Khan. Titled AAINA, the event is being organised in collaboration with AAANE in October to showcase the impact of Aligarh poets on Bollywood.

Tahir Ali is the Boston area-based author of “Muslim Vote Counts” (Wyndham Hall, 2004). Married with three children, he is from Pakistan. His parents hail from UP, India.

Believe in peace No bans here, it's all aman and aasha