Another feather in MHB’s cap 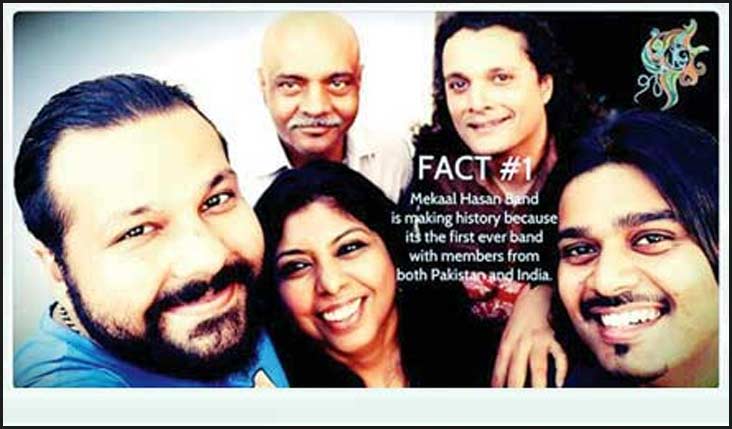 The Mekaal Hasan Band’s recently released album Andholan is the first instance of such a joint Indo-Pak collaboration. It also features the band’s first female vocalist

Chatterjee’s inclusion marks the biggest departure from the earlier line-up – this is the first time that a female vocalist is singing with MHB.

This was an “intelligent move” following the departure of popular vocalist Javed Bashir from the band, as any male replacement would have drawn comparison with Bashir, observes Narendra Kusnur in his music blog, narenmusicnotes.wordpress.com.

Kusnur terms the two Pakistanis in the band as “supremely talented” (Hasan on guitars) and “brilliant” (flutist Mohammed Ahsan Papu).

“All in all, this is another feather in MHB’s cap. The band has a distinct sound, and the tunes are strong enough to merit repeated hearing.”

“This album is very special to all of us”

Calcutta-born vocalist Sharmistha Chatterje has trained in Indian classical music in her childhood and has a Master’s degree in English Literature. For the last decade or so, she has been actively involved in Bollywood and the advertising industry as a playback singer and recording artist.

Referred to the MHB by Gino Banks, the band’s drummer, she says, “The whole thing just felt right from the start…This album is very special to all of us; we poured our hearts out, and that’s something that I feel will resonate with the audience,” she told Instep soon after the album was launched.

Chatterjee sings Bulleh Shah’s lyrics in the album opener ‘Ghunghat’ – the first time she is singing his lyrics… “it was a particularly challenging song”.

Can music bring India and Pakistan together? “If the music is honest and made with integrity, it has the power to touch and heal hearts. It can transcend barriers of nationality, cast, creed, or religion”.

Mehul Pandit, a composer, guitarist and singer who studied under A. R. Rahman for two years and has continued to study music says he has been “a big lover of music of the MHB” since he was in school, “specially their first album which I listen to almost every week since then till today”.

“There is no other band to my knowledge with a really good female classical singer. You both have given a beautiful new and truly amazing sound to the band. Not to mention the always amazing other three guys in the band,” he says in a Facebook post.

“As always, you are just as shockingly good! ‘Kinarey’ was the song I heard in the movie Khuda ke Liye three years back and I instantly wanted to listen to the full version of the song.

“Thanks to you guys for making it available to us after 3-4 years. Heartfelt congratulations to you for the amazing work on the new album. “A big hug from a sincere music lover. Enough said, I’ll go back to enjoying the album.”

The urge to express ourselves "I feel if music is honest and made with integrity, it has the power to touch and heal hearts."