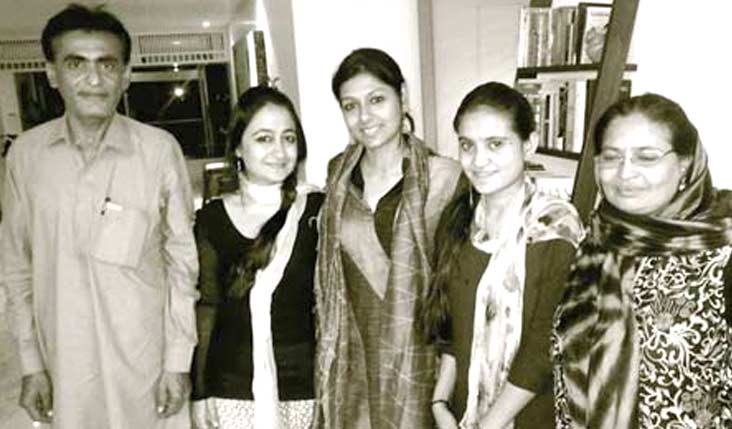 On January 20, 2014, her seventeenth birthday, Kiran Soomro flew from Karachi to Bangalore on with her parents. They left with hope in their hearts and a prayer on their lips, expecting that Dr. Devi Shetty at the Narayana Health hospital would be able to surgically close the hole in Kiran’s heart.

Five days later, they learnt that her condition is inoperable by now. It would have been a fairly simple operation had it been looked into and treated earlier. Doctors initially discussed a heart-and-lung transplant. Dr. Balakrishnan, a well-known surgeon from Chennai drove down on his own initiative to examine Kiran in Bangalore.

The medical consensus is that for now she should continue on the medicines that she was prescribed in Delhi six months earlier. These have already greatly improved her quality of life and with proper care and continued medication, she can continue to live a reasonably normal life.

Kiran and her family have shown dignity and courage in dealing with their troubles. And so many across borders, boundaries and religious divides showed the power of love and humanity in their effort to make Kiran comfortable. 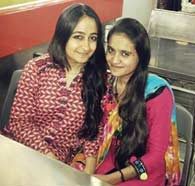 Kiran and Nitu in Mumbai: This is AMAN KI ASHA

Word about her needs spread through the Aman ki Asha network. There were many financial contributions, amounts ranging from thirty to a thousand dollars, including from non-Sindhi Indians. PIA donated the tickets for the Karachi-Mumbai-Karachi flight. In Karachi, Haresh Jiwnani and Dr Birma Jesrani went to see them off at the airport, and to receive them when they returned on Feb 3. Narayan Health is located far from Bangalore city, but so many in India generously shared their precious time and resources, making the trip to spend time with her and make her feel at home.

Kiran’s journey got off to a rocky start, as the Karachi-Mumbai flight was delayed by five hours. Waiting at Mumbai airport with re-booked tickets to Bangalore was Nitu Jiwnani, 26, a dancer who met them in Delhi last May. Connected by their common language, Sindhi, she adopted Kiran as her younger sister and refers to Kiran’s father as ‘Abbu’ and mother as ‘Ammee’. “Kiran became special for me,” she says.

Kiran, red-eyed, exhausted clung to Nitu and wept. She didn’t want to get on another plane. Nitu comforted and cajoled her, then took them in a taxi to the domestic terminal some distance away. Fortified by a snack and a cold drink, and a pep talk from Nitu, Kiran felt able to tackle the journey ahead.

Landing in Bangalore past midnight, first they were unable to locate the vehicle that was picking them. When they reached the hotel they found that their room had been given away as they were no longer expected. Another room was arranged but the kitchen was closed, so no dinner.

They spent the next day completing the formalities of reporting at the Foreigners’ Registration office, as Indian and Pakistani visitors to each other’s countries are required to do in each city they visit, within 24 hours of arrival and departure. The visa-granting authorities can waive this requirement, but had not done so in this case.

Above: “Nanaji” Konchadi Vasanth Pai in his new Ajrak from Siknader: “Friendship is a precious gift”

AKA volunteer Konchadi Vasanth Pai, 82, went to visit the Soomros several times. At his age, changing three buses for a two-hour long journey, and with severe ankle arthritis, this couldn’t have been easy. He shrugged it off: “My difficulties pale into insignificance compared to Kiran and her family’s.”

The first time he went, Kiran had started undergoing her medical tests. He found the family as they were going to the International Patients’ OPD. Kiran looked tired “but climbed the stairs easily, preferring not to take the elevator,” said Pai, whom Kiran took to calling “Nanaji” (grandfather).

He was with the family during the subsequent transport delays that day and when they moved to a guesthouse closer to the hospital. The new room was distressingly sparse and small; the staff had expected Kiran and her mother to stay at the hospital. Besides the moral support his presence provided, they were able to use his cell phone to make some calls to try and sort out the situation.

Aman ki Asha volunteers went into action to arrange better accommodation, researching and making bookings. From Delhi, Samir Gupta woke up his sister Shikha in Bangalore at 6 am to cook for Kiran. The working mother happily did so, and packed daal, bhindi and green chutney for them before leaving for office that morning. Young Aman Alam and Siddharth Manu went by on a motorbike to pick it up and take it to Kiran. The gesture moved Kiran’s mother to tears. Siddharth and Aman spent all morning with the Soomros, helping shift them to a roomier, cleaner facility nearby.

Rotary took care of the costs incurred by the Soomros’ stay and hospital fees in Bangalore. Rotarian O.P. Khanna visited them several times, met with doctors, and sent regular reports and updates. Kiran is the 36th Pakistani patient whose medical care he has coordinated.

A pink teddy for Hina: Kiran and Sadiqua

Journalist Zakeer Hussain took over a big parcel of food, making an effort to include meat dishes. Businessman Mansoor Chetlu took over his laptop so that they could Skype with the children in Pakistan. He went again the next day, waiting with them till the doctors’ reports came in. He had planned to take them the Lal Bagh (royal botanical garden completed by Tipu Sultan) but was unable to due to the delay in the reports. The Soomros managed to see the gardens another day, hiring a taxi for the trip.

AKA volunteers coordinated to ensure that they had enough cash for their expenses. Ex-Commissioner of Police Bangalore and former Member of Parliament Mr P. Kodandaramiah and his wife visited, wanting to make a personal financial contribution. But there was no need – so many had already donated.

After Ruchhita Kazaria in Kolkata contacted the Bangalore chapter of her St. Xavier’s College Calcutta Alumni Association, Xaverians Hunaid and Sadiqua went over with biryani, chocolates and biscuits.

“This India-Pakistan thing is purely psychological. We are human beings, aren’t we?” said Hunaid.

Sadiqua was thrilled to be able to take Kiran and her parents out for dinner and coffee a couple of times.

“She wanted to go for a long drive, so we took her along the elevated highway. Shahrukh Khan’s music was playing in the car, which made Kiran very happy,” said Sadiqua.

She also took them shopping to buy gifts for the other children, especially the youngest, six-year old Hina, for whom they bought a big pink teddy bear. 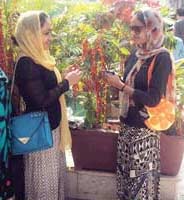 When the doctors pronounced Kiran to be inoperable, Pai went over to find Kiran red faced from sobbing, and her parents downcast but slowly reconciling to the situation.

“Kiran too slowly came to terms with the reality. Sikandar Ali, a simple, humble man with a golden heart, was trying his best to keep his daughter in good humour, make her laugh and eat in the restaurant and sip Sprite, her favourite cold drink. Later, they sat in the garden in the sun. Kiran talked about Bollywood, whether Shilpa Shetty is from Bangalore, the names of the playback singers of whom she knew more than me,” says Pai.

“Inspite of having dropped out from school, I found her very intelligent and more computer savvy than me.”

Kiran cheered up further when Pai let her use his iPad to Skype with her siblings in Karachi.

She is a “girl with an indomitable will with a zest to live and fulfill her unrealised dreams,” he observed. “A profile in courage.”

As Sikander Ali draped a farewell gift, an ajrak from Hyderabad, Sindh, around Pai’s shoulders on their last day in Bangalore, Pai got a lump in his throat.

Nitu met them at the airport in Mumbai the following afternoon, Saturday. They took a taxi to her one-bedroom rental. They made the most of their time in the city before taking the flight back on Monday. They visited Lokhandwala Market and ate out. The girls bought matching banjara pants and black t-shirts to wear the following day. They had to take care of the police registration and say a prayer and eat a meal at Haji Ali’s dargah.

And since it is after all Mumbai, how could they not touch the entertainment world? Nitu introduced them to some television actor friends who are finalists in the Nach Baliye contest.

Well-known film star Nandita Das found time to invite them over for tea and a chat on Sunday afternoon. She was touched by the close relationship between Kiran and Nitu and they were moved by her down-to-earth interaction.

The visit ended with the sweetness of homemade mithai. Bhavana Makhija dropped off several boxes of the internationally packaged Mother’s Touch Singhar Mithai that she deals on behalf of Raju and Suman Chhabria Parwani; they are members of the Facebook group Sindh Aman ji Asha (where Nitu is an administrator). Suman Parwani makes the mithai that they wanted to send back to Pakistan.

The India trip did not turn out as Kiran and her family had hoped. But they have returned with the precious gift of love and hopes and prayers for Kiran’s health and wellbeing echoed by many more hearts across the globe.