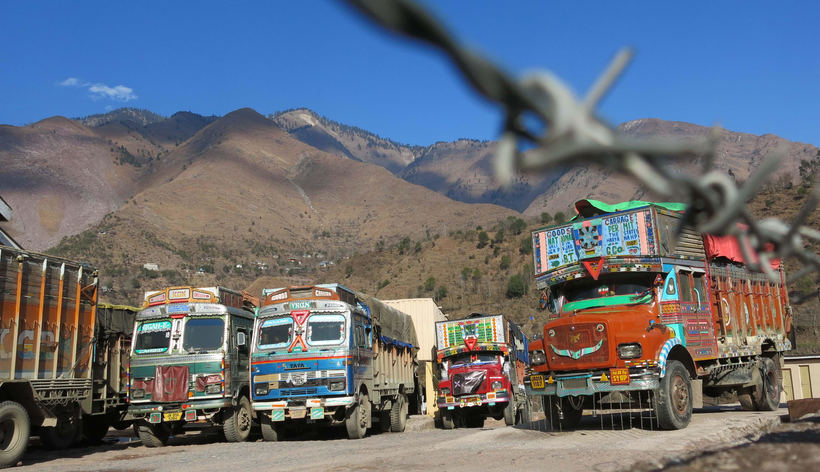 In October, US Secretary of State Rex Tillerson landed in South Asia on the ninth anniversary of a rare “Berlin Wall moment” in Kashmir. In October 2008, Indian and Pakistani leaders opened up the heavily-guarded Line of Control (LoC) in Kashmir for small-scale, barter trade. Ending decades of separation, beautifully decorated trucks traveled across the line for the first time. Kashmiris from both sides gathered on “Aman Setu” (Peace Bridge) and exchanged hugs, gifts of dry fruits, and salty tears.

Today, the trade process is in danger of shutting down. India and Pakistan should bring it back to life. As a radical political experiment in “making borders irrelevant,” an open LoC offers the only hope of resolving an impossible territorial scuffle between nuclear frenemies: India, Pakistan, and China.

The primitive mechanics of cross-LoC trade have restricted its economic potential. The Bureau of Research on Industry and Economic Fundamentals, an Indian policy think tank, reported $699 million worth of commodities traded between 2008 and 2015.

It is a “potatoes for tomatoes” barter system, regulated by a vague “Standard Operating Procedure.” Kashmiri traders are issued special permits rather than passports, which are usually the basis of regular international trade. Governments cannot agree on a common trading currency. A handful of items are traded, mainly fresh fruits, vegetables and Kashmiri handicrafts. Lengthy security procedures and poor infrastructure at trade facilitation centers delay and block trade flows.

Still, governments have allowed this trade to limp along for reasons that go beyond economics alone.

“More than actual GDP, what the trade process has brought to fruition is emotional GDP,” says Y.V. Sharma, former President of the Jammu and Kashmir Joint Chamber of Commerce and Industries. “I believe that this has immense potential to make borders irrelevant.”

This 435-mile LoC is no Euro-style border. It originated in a de-facto ceasefire line following the subcontinent’s partition in 1947. The LoC divides Jammu and Kashmir, ranked among the world’s most militarized regions, into land parcels administered separately by India and Pakistan. Armies frequently trade fire across it. It separates tens of thousands of families from loved ones living on the other side. Being older, longer, and taller in some places than the Berlin Wall, the LoC symbolizes conflict and painful separation for Kashmiris. By contrast, this trade presents hope for peace and connectivity.

Locals argue trade has also made them safer. “Since the trade began…a few kilometers surrounding [both] trading points have been free from military cross-fire,” said Kashan Masood, a local Kashmiri trader on the Pakistani side. A recent study by the United States Institute for Peace found that local dynamics can trigger ceasefire violations in Kashmir. Conversely, communication among security forces at the local level can help ceasefires stick. Trade involves regular flag meetings at the LoC between Indian and Pakistani battalion-level army officers, which prevents conflict escalation.

Unfortunately, the trade recently has grown unpopular with governments. The larger trading point in Poonch was closed for more than three months while the Indian National Investigation Agency investigates allegations of money-laundering and arms-smuggling via LoC trading points. This wouldn’t be the first instance of wrongdoing. In 2015, trade was suspended when authorities discovered a large volume of “brown sugar” (cocaine) in a Pakistani truck crossing the LoC.

While these are legitimate concerns, it would be a mistake to stop the trade. Governments should instead regulate trade more effectively. Experts recommend creating joint teams of Indian and Pakistani officials to investigate narcotics and arms smuggling. Formal banking channels would enhance financial accountability by making trade transactions traceable. Better infrastructure at trading points would improve trade efficiency and security.

India and Pakistan can potentially resolve the seven-decade conflict over Kashmir’s borders in three ways.

First, fight a war to change the borders. After three failed wars, both governments recognize they are unlikely to win territory in this way.

Second, convert the LoC into an official, hard border. This will anger Kashmiris and stoke the flames of existing tensions in the region: a risk that neither India nor Pakistan can afford.

Third, make borders irrelevant by opening up the LoC for trade and travel. This is the only option that India, Pakistan, and Kashmiris can live with. Jammu and Kashmir Chief Minister, Ms Mehbooba Mufti, has staked her government’s survival on this trade continuing. It is time that Indian and Pakistani leaders also added their political heft to reviving the trade process.

It may be barter, but it is still a good deal for everyone.

Ameya Kilara is an Indian lawyer and leadership fellow at the Center for Public Leadership, John F. Kennedy School of Government, Harvard University. Her research with the Program on Negotiation has focused on the role of leadership in peace processes. She has worked in international conflict resolution with the South Asia Programme at Conciliation Resources, London.  This article was originally published in The Huffington Post, Dec. 12, 2017.

Mera dost Raza, my friend Raza Growing up with Shashi Kapoor in Pakistan