Before dealing with Kashmir, India & Pakistan should try SIX EASY STEPS TO PEACE 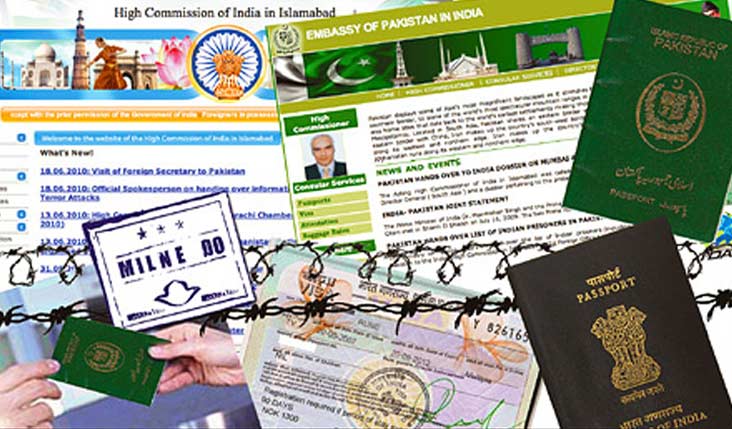 WHAT Both countries restrict entry to each other’s citizens. India has started an online visa process for Pakistani citizens but it’s not seen as good news because applicants will need an extra document – a letter from an Indian sponsor duly authorized by an Indian official

ACTION Change the visa regime along the lines of those with other friendly countries; grant tourist and student visas; give preference to business visas; offer visa on arrival to frequent travelers who have already been security cleared

REACTION More people-to-people contact; will give a fillip to trade and business; a boon for families divided across the two countries; promote tourism in both countries; student exchange programmes will make for better understanding.

ACTION Grant visas to correspondents of national newspapers, magazines and television channels on each side of the border REACTION More journalists means more on-theground reportage back to the other country, rather than rumour and speculation. Information cuts ignorance, which gives rise to bigotry and hatred.

WHAT In March 2004, AirTel (India) signed the first bilateral roaming agreement with Pakistan. It ended a few months later.

WHY Mistrust. Both intelligence agencies claim the service will be used by terrorists.

ACTION Allow all mobile phone companies to provide the roaming facility along the lines of arrangements with other SAARC nations, with necessary security pre-conditions.

REACTION More business for mobile phone companies; more connectivity for people in both countries, which should make for more goodwill and is better for bilateral trade.

WHAT It is synonymous with freezing weather and has the dismal tagline highest battlefield on earth, but ‘Siachen ironically means the place of wild roses. India and Pakistan have fought here intermittently since 1984. Military analysts estimate the combined death toll here at 5,000.

WHY At 20,700 feet India controls these heights at an estimated cost of up to $1 million a day. It is reluctant to back off for fear Pakistan might walk in. After the Kargil war India is wary of pulling back; Pakistan insists it doesn’t pose a threat anymore. But experts say the strategic importance of the glacier, where neither stationed troops until 1984, is debatable. After partition, the line of control was not extended up to Siachen because no one thought it worth bothering about.

REACTION The end of a 26-year battle for domination of a frozen region where thousands of soliders have died. Defence expenditure could be trimmed; friction would reduce at the border and the glacier’s ecological system be protected.

WHATAbout 800 fishermen languish in prisons in India and Pakistan. Prior to the release of 100 or so prisoners some years ago as a confidencebuilding measure, there were 610 Indian fishermen imprisoned in Pakistan and about 300 Pakistani fishermen detained in India. Pakistan is also holding more than 400 Indian fishing boats.

WHY Perhaps, fishermen suffer the brunt of the neighbourly hostility, being ignorant, poor and marginalized communities unaware of the maritime border and protocols.

ACTION The fishermen and their boats  should be released  under Article 73 of the UN convention on Laws of the Seas, after making them pay a fine for the transgression. Consular access should be provided; they should be released after they complete their sentence.

REACTION It would be a confidencebuilding measure, reduce suspicion overall and would be one less emotive issue to agonize over.

WHAT India claims Sir Creek citing the Thalweg Doctrine of International Law that says river boundaries between two states may, by mutual agreement, be divided in half. Pakistan claims the entire creek as per paras 9 and 10 of the Bombay Government Resolution of 1914 signed between the then government of Sindh and the Rao Maharaj of Kutch.

WHY Sir Creek itself has little value. It is a marshy wasteland. But where the boundary line runs will determine how much Exclusive Economic Zone (EEZ) each country loses or gains. If the boundary runs along the Eastern Bank as Pakistan wants, India will lose several hundred square kilometers of continental shelf. It is the prospect of finding substantial oil reserves in the continental shelf that has made both sides inflexible. But that changed thanks to the UN, which pushed both to look for a compromise. The UN Convention on Law of the Sea set May 13, 2009, as the deadline for signatories to claim maritime rights over territorial waters, contiguous zones, EEZs and the continental shelf. India maintains constant vigil here.

ACTION Set up joint ventures in the region. The UN should put pressure on both governments by declaring the creek “international waters”.