Beyond business as usual 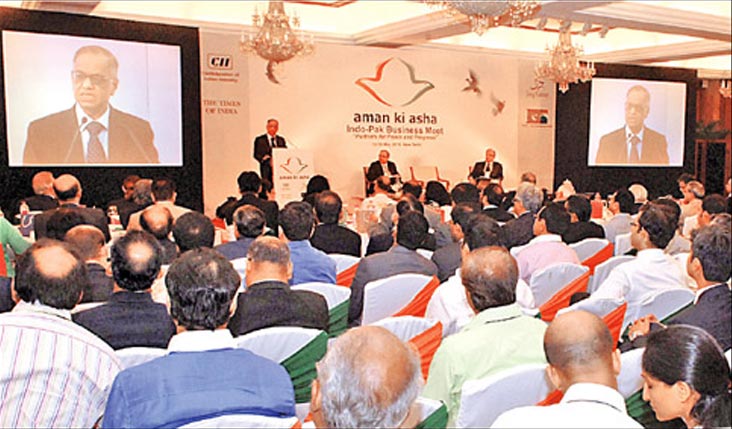 “The only way to peace,” pronounced Vineet Jain, the young Managing Director of The Times of India Group, “is commerce”. He was speaking at the inaugural session of Aman ki Asha’s ground-breaking trade and investment meeting held in Delhi, May 18-19, 2010. Attended by some fifty high-powered Pakistani delegates and a strong contingent of high-powered Indian businessmen, entrepreneurs and CEOs that filled the conference hall, the event was a resounding success that surpassed all expectations, if we say so ourselves.

With the right kind of follow up, it could, as Shahrukh Hasan, Group Managing Director of the Jang Group put it, “be a the start of a new chapter in our history.”

The presence and speeches of Indian Finance Minister Pranab Mukherjee, and Shahid Malik, Pakistan’s suave High Commissioner in New Delhi gave a real boost to the meeting, taking it beyond the level that most had expected.

The heart-warming speeches and commitment of the other speakers, including Indian icons like Narayana Murthy, the godfather of India’s blooming software industry, Dr Brij Mohan Lall Munjal, the ‘king of the two-wheeler industry’, and Dr Naresh Trehan of Medanta – The Medicity added to the optimism that permeated the entire conference.

“We must take trade to the front burner,” said Mr Murthy. “We need Indian and Pakistani scientists to work together to fight common diseases like malaria etc.”

“I come from Kamalia (now Faisalabad district),” Dr Munjal told participants. “I have helped my counterparts there whenever I could. When Pakistan’s first bicycle was manufactured, I was there to see it roll out of the factory. I will always do what I can for any Pakistani.”

“I have advised the government of India to unilaterally open trade for Pakistan,” declared his son Sunil Munjal, MD Hero Cycles, and a top businessman in his own right. “India should remove all non-tariff barriers and allow Pakistani entrepreneurs and businessmen access to the vast Indian market. We can review the process after some months and see what harm or good it has done.”

India has granted Pakistan most favoured nation (MFN) status – but without textiles, which form 60 % of Pakistan’s expoerts. Pakistan uses this as a justification to deny India MFN status.

Dr Trehan talked about the possibility of an Indo-Pak medical society and the need to organise a large, bilateral conference on a high-end medical level that he plans to host within the next year.

There were so many other speakers, so much goodwill. We have reported most of what transpired in earlier pages (compiled at the Aman ki Asha website – www.amankiasha.com). We hope you enjoy this page of the conference and its sidelines in pictures. Here’s to more such events.