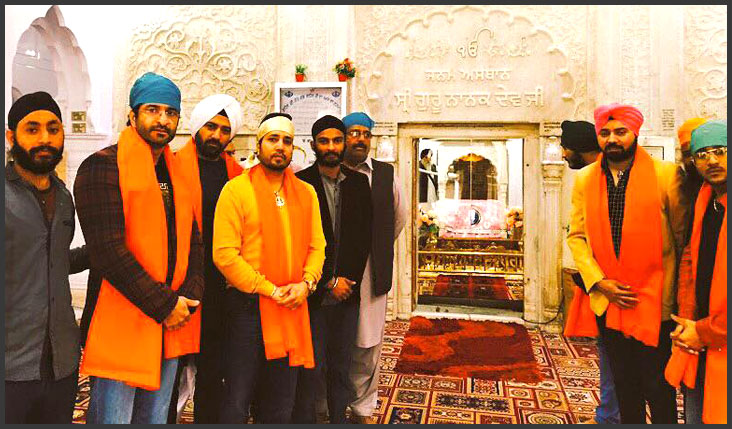 The Bollywood singer: with Lahore
organisers

Indian singer Mika Singh, famous for “Mauja Hi Mauja”, performed live in concert in Lahore for the first time last week. The show, earlier scheduled for December 2014 was postponed due to the massacre of school children in Peshawar.

“We believe that we have to move on and forward with positive aim and ambition and fight all tensions in Pakistan. Lets’ rejoice this Spring with Mika Singh live in Lahore and start making a new, strong and happy Pakistan,” said the event organisers, Northerngate.

Singh tweeted: “Had a great show in #Lahore … Thanx to Yahya Rana, Bushra Rana and Imran Ahmed.. And all of my Pakistani fans … Wd love to come again.”

During his visit to Pakistan, he also visited Gurudwara Nankana Sahib. “Feeling so blessed that I got the chance to visit the most divine place Gurdwara Nankana sahib for the second time.

The birth place of our 1st guru Nanak dev ji,” he commented on his Facebook page.

Pakistan and India last held a formal round of talks on September 8, 2012 with the then Foreign Minister Hina Rabbani Khar at the table with her Indian counterpart S.M. Krishna.

The Foreign Secretaries of both countries had also met on September 7, 2012. But the next round of talks scheduled for January 2013 could not be held due to tensions arising from ceasefire violations at t the Line of Control that both sides blame the other for. Pakistan and India agreed to resume secretary level talks two months after Prime Minister Nawaz Sharif visited New Delhi in May 2014 for the inaugural ceremony of the newly elected Prime Minister of India Narendra Modi.

The dialogue was due to be resumed in Islamabad on August 25, 2014 but was cancelled when India backed out following Pakistan High Commissioner’s meeting with Kashmiri leaders.

Welcoming the move, Pakistan hopes to discuss all outstanding issues between Islamabad and New Delhi. Analysts say that the talks, while unlikely to yield any immediate results, are an important step on the road to normalising relations.

A minimum agenda for peace

The new ruling coalition sworn in to Jammu and Kashmir on Sunday has issued a minimum agenda that includes resuming talks with Pakistan and Kashmiri stakeholders, including the Hurriyat Conference.

Eleven ministers from the Bharatiya Janata Party (BJP) and 12 from Kashmir’s People’s Democratic Party (PDP) took the oath of office at a ceremony presided over by Chief Minister Mufti Muhammad Sayeed, founder and head of PDP Prime Minister Modi and senior party members. “The (Modi) government has recently initiated several steps to normalise the relationship with Pakistan,” the coalition’s common minimum programme noted. One of these steps is the two-day visit of Indian Foreign Secretary S. Jaishankar to Islamabad. “The coalition government will seek to support and strengthen the approach and initiatives taken by the government to create a reconciliatory environment and build stakes for all in the peace and development within the sub-continent,” stated the minimum programme of the coalition.

Dialogue with Pakistan was reported to be a non-negotiable precondition for PDP’s agreeing to join a coalition with the BJP, which is sitting in the treasury benches for the first time. Ties with Pakistan will be pursued “by taking confidence building measures such as enhancing people to people contact on both sides of the LoC, encouraging civil society exchanges, taking travel, commerce, trade and business across the LoC to the next level and opening new routes across all three regions to enhancing connectivity”.

“Indian military occupation of Kashmir and its excesses have been a major theme with Mr. Sayeed’s constituents. It found expression in a roadmap to dilute if not repeal the Armed Forces Special Powers Act (AFSPA) that gives troops immunities from civilian prosecution,” comments senior journalist Jawed Naqvi in a recent report in daily Dawn.

Both sides have also agreed to help the Kashmiri Pandits return to their homes and to protect and foster ethnic and religious diversity.

Lit fest hopping: from JLF to LLF A student "exchange for change"