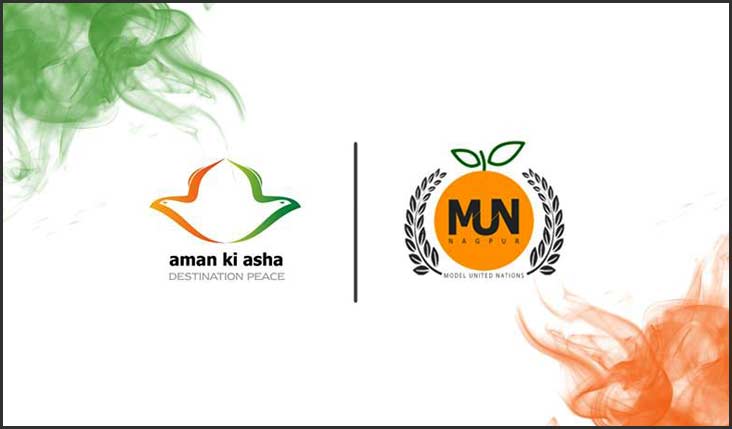 The Nagpur Model United Nations (MUN) including a special committee on Aman ki Asha is set to take place on May 30-31, 2015 in India. The other committees are General Assembly, World Health Organisation and Human Rights Council.

Focusing on college and high school students, the organisers are trying to get the maximum number of Pakistani participants. The next hurdle will be obtaining the visas.

“The hopes of the youth are raised high to meet each other and to make a difference,” says Devang Shah, Director, Aman ki Asha Council at Nagpur MUN. “They are some of the most intellectual minds (of our countries) and they are craving to reduce the enmity to such a level that the progress of both these nations is not hindered.”

Participants are selected after an application process that includes interviews, conducted via Skype in the case of Pakistani applicants. “It gives me intense happiness to see the coherence of thoughts that we got to hear from other side of the border on the Skype interviews,” says Shah. “In fact, during the interview process itself we have got amazing solutions to the problems.”

A scene from the ‘cineplay’

Despite visa woes and difficulties, Indians and Pakistanis keep trying to enable cultural exchanges. This time it is two acclaimed actors from Pakistan and India, Sania Saeed in conversation with Nandita Das in Lahore, on March 17, 2015, following the screening of a “cineplay”, Between the Lines.

The contemporary play by Nandita Das and Divya Jagdale is set in urban India and focuses on the conflicts faced by an affluent lawyer couple who find themselves caught between modernity and tradition. They end up arguing on opposite sides of a criminal trial, resulting in the blurring of their personal and professional lives.

The play, directed by Das for stage, and recorded for a cinematic experience is “a new language of storytelling,” as she puts it.

Sharing here a thoughtful post on the Aman ki Asha Facebook page by Ravi Kallianpur?, who writes that he was “enjoying every bit” of an online travelogue by a Pakistani writer about the Pakistan side of the Punjab in a Pakistani newspaper. Then a thought struck him:   “If we were to take every reference to the publishers and author’s name, country, religion, religious places, religious figures out of this piece and challenge people from both countries to be able to pin-point which nation was this travelogue based in, very few, if any would know the answer.“The irony is this: I, of South Indian ancestry have very little in common with an Indian Punjabi, who has lot more in common with a Pakistani Punjabi. I am hopeful about the future because of the younger generation; with exceptions, they as a group seem to have very little patience with religious acrimony.

“I know it will always be two nations, but someday I hope to see the line between them get softer; like the border between India and Nepal, or the one between the US and Canada.”

Students at the workshop.

Our friends at ‘Friendships Across Borders: Aao Dosti Karein’ (ADK) write that they’ve had “an exciting week”. Aao Dosti Karein’ was invited by the Faculty of Journalism and Communication at the Maharaja Sayajirao University in Baroda, India, to facilitate a two-day workshop on March 10-11.

“Over two days, they conducted surveys about attitudes towards Pakistan among Indians, got introduced to the concept of peace journalism, engaged in art activities and problem-solving tasks, devised skits, watched short films focused on people-to-people contact between Indians and Pakistanis, and learnt about social media initiatives focused on peace-building in the Pakistan-India context,” says ADK.

“Our inbox is buzzing with happiness, reading about how the workshop touched their hearts, Many of them are planning to work on projects that would reduce the hostility between both nations by connecting young people using social media tools.”

More power to you, we say.

As part of its “Celebrity Chefs Series”, Lahore restaurant Andaaz has announced that its chefs “are all set to dish up the simple, delectable recipes by the Michelin star chef Atul Kochhar”, March 13-22, 2015.

Atul Kochhar was one of the first two Indian chefs to be awarded a Michelin star and has become the recognizable face of Indian cuisine on television. His cuisine is renowned for its vibrancy and the subtlety of his spice mixes.