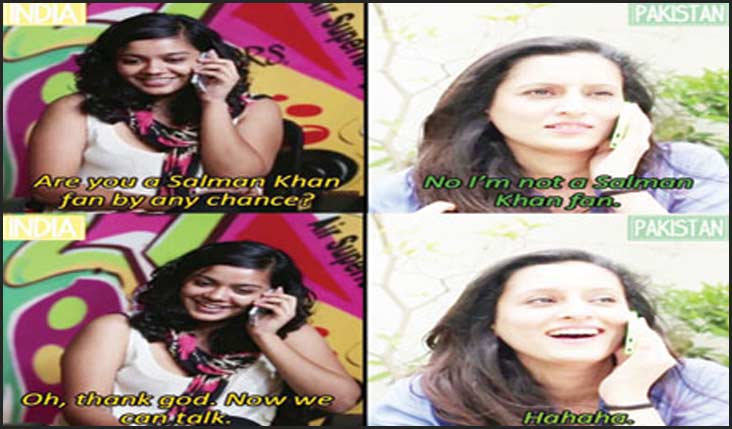 When India spoke to Pakistan

After Google’s wildly popular online ad “Reunion” last year, another video effectively bridging the Indo-Pak divide and bringing people together is going viral. All India Bakchod, a comedy collective, in collaboration with Khaula Jamil of Humans of Karachi and a crew in Pakistan, asked random Indians and Pakistanis on the streets of Mumbai and Karachi what they thought of the other country.

The directors then got them to talk to each other on the phone and wish one another for Independence Day. The result: a smart, sassy, funny video that shatters stereotypes and suspicions most effectively.

Indian origin Zeshan Bagewadi and Pakistani origin Nushmia Khan, both based in the USA, recently collaborated to produce a video that they uploaded to the web on August 14-15, for Pakistan and India’s Independence Days. Bagewadi sings the national anthem of Pakistan, and then India, with similar split-screen video images from either side. The powerful, moving video can be viewed at: http://bit.ly/borderanthem

The Consuls General of India and Pakistan in Toronto, Akhilesh Mishra and Asghar Ali Golo are coming together at various events, like Stroke of the Masters, an art exhibition in Mississauga, a suburb of Toronto that is part of the Mosaic South Asian Festival. Featuring the works of prominent artists like M.F. Husain, Jamini Roy, Thota Venkuntum, Jatin Das, and S.H. Raza, the exhibit will run till Sept 1. The CGs were also guests at a much-appreciated mushaira organised by Mosaic on the occasion of India and Pakistan Independence Days.