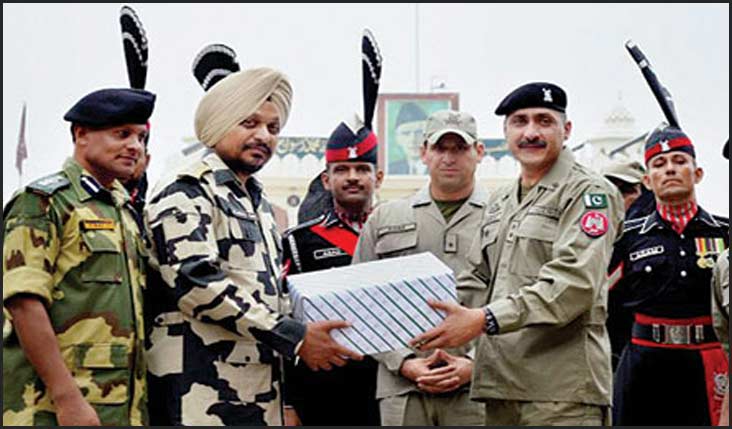 As they do at every festive occasion, the border guards of India and Pakistan greeted each other and exchanged sweets at the border checkpost at Attari-Wagah on the occasion of Eid recently. Officers and troopers of Pakistan Rangers and Indian Border Security Force also embraced one another at the border gates, a short drive from Lahore and Amritsar.

En route, the bicyclists will stop at various places in Haryana and Punjab and finally participate in a joint celebration of India and Pakistan Independence Days at Wagah border on Aug 14-15. They are calling for the South Asian nations to come together in a South Asian Union along the lines of European Union.

Delhi University Students for Peace (DUFSP) is an initiative started by Delhi University students joined by colleagues from other colleges and universities like Jamia Milia and JNU. Kuldip Nayar has been leading peace activists to light candles on the Independence days of Pakistan and India (Aug 14/15) at the Attari-Wagah border every year since 2000.

The DUSFP’s first Indo-Pak Peace Cycle rally last year started on June 1, 2013 in Kanyakumar and ended 3800 km later on August 15, 2013 at the Wagah border. They received “overwhelming support” along the way. This time, too, “the weather has been supportive and so have the people,” said Bhupendra, one of the participants.

“India and Pakistan spend huge amounts for defense which could be used in the fight against poverty and hunger. If all or even a portion of that amount was spent on social welfare, would not the cause of development be served better? We cannot after all substitute weapons for food or medicines or education. All that we require is a new imagination. The idea is simple: ‘Vasudhaiva Kutumbakam’, ‘Love thy neighbor’, or just love.”

Time for ‘mutual reassurance’ not deterrence

India and Pakistan need to act in a mature manner and move forward, transcending their prejudices and bitter history, urges Husain Haqqani, former Pakistani Ambassador to the United States. Currently Director for South and Central Asia at Hudson Institute in Washington DC and Professor of the Practice of International Relations at Boston University, he is in India delivering a series of well-attended lectures on India-Pakistan relations.

He believes it is time to “replace the ‘Diplomatic Dance Approach’ with the ‘Great Leap Forward’ approach”. This necessitates “setting aside issues which can’t be resolved immediately and recognising that both countries would benefit greatly from better relations.”

“Many issues between India and Pakistan are psychological in nature and defy logic. India-Pakistan relations should be based on reality and not influenced by ideology or psychological barriers,” he said at a public lecture in Bangalore organised by the International Strategic and Security Studies Programme (ISSSP) of the National Institute of Advanced Studies (NIAS). He also spoke at the Asia Society in Mumbai on Aug 5.

It is time for both countries to “move beyond the idea of Mutually Assured Destruction (MAD) and embrace Mutual Reassurance”, he says, “Mutual deterrence will only come about when sub-conventional warfare does not exist. Terrorism is the problem, which undermines the prospect of reassurance… States need to cooperate with each other to restrain non-state actors rather than using them against each other, which is a recipe for disaster.”

On the rise of religious extremism, he says that, “an individual can be pious, a society can be religious but a state should be secular.” Strategic thinking in Pakistan is changing, although the pace is slow, he notes. “For every Hafiz Saeed in Pakistan, there is a person with a saner global view.”

Prof. Haqqani concludes on a positive note. “If Germany and France can get over their differences, our differences are not even half,” he argues. “Germany and France acknowledge that their relationship is not a zero sum game and thereby they have managed to get along. For relations to improve, India and Pakistan have to do the same.”