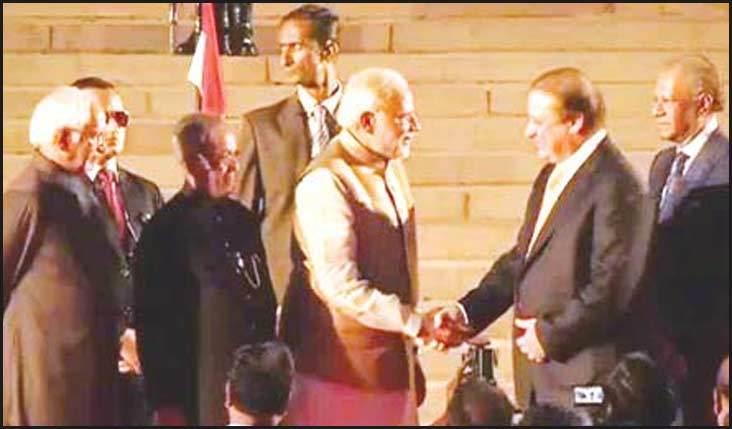 A handshake that brings great expectations

Pakistan Prime Minister Nawaz Sharif’s arrival in Delhi on Monday to attend Narendra Modi’s swearing-in as India’s new Prime Minister is seen as a big step towards revitalising ties. “I am carrying a message of peace. Dialogue is the only solution,” Sharif told reporters before leaving Lahore.

Accompanying Mr Sharif was his wife Kulsoom Nawaz and son Hussain, besides Pakistani officials. This was the first time that a leader from either country attended his counterpart’s inauguration since Independence in 1947.

The Pakistan premier was among the six South Asian leaders invited for the ceremony. He met India’s new Prime Minister Modi on Tuesday as part of a series of bilateral meetings with all eight world leaders.

Mr Modi’s invitation to Mr Sharif was seen as a bold move given the opposition from the BJP’s oldest ally, Shiv Sena, which believes India must not resume peace talks, cultural and cricketing ties with Pakistan unless violence along the border stops. Similarly, Mr Sharif’s decision to attend was taken despite opposition from certain quarters in Pakistan.

Milne Do! Healing the wounds