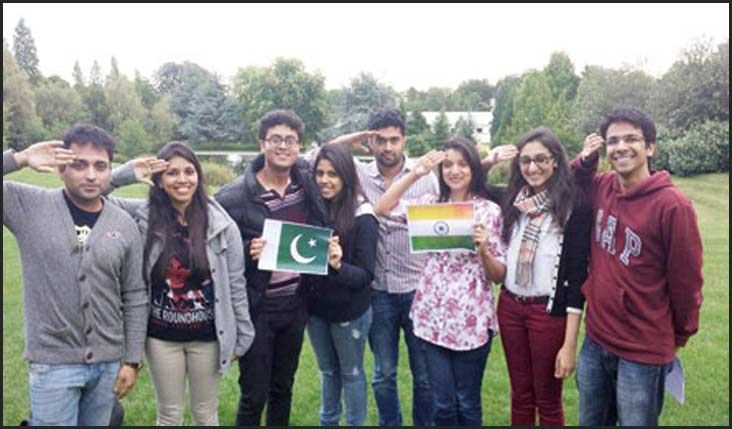 Milne Do: Indian and Pakistani students demonstrate solidarity in the land of their erstwhile colonial masters

A group of Indian and Pakistani students celebrated their countries’ independence from Britain in Britain itself raising slogans of peace, love and co-existence.

Calling themselves Global Desis, these students from University of Bath in the south west of the United Kingdom, gathered together last week holding flags of India and Pakistan. They believe that war is a language of vested interests and that it is the common people like themselves who understand words of love and peace.

“In the last one year at University of Bath, I have spent the most precious moments with my Pakistani friends,” said Apurva Mistry from Mumbai. “We have laughed, cooked, danced, celebrated festivals, shared secrets and chatted for hours together. I see no difference between people on both sides. Why then the hatred and enmity?”

Maryam Saeed from Lahore whose grandparents migrated to Lahore from the other side of the border says that partition was one of the worst human tragedies of all time. “While we must cherish our freedom and independence today, we must also remember those who lost their so much back in 1947. Borders can divide land, not people,” she adds.

‘Partition couldn’t separate our hearts. A visa-free subcontinent is all that we need to explore more about each other to dispel myths,” says Zeeshan Akhtar from Bhopal.

These young peace preachers call for their fellow Indians and Pakistanis to strive for a peaceful region free from war, terrorism and jingoism. It’s never too late, in fact high time that we free ourselves from the legacy of colonialism, they say.

Briefs Not too dissimilar