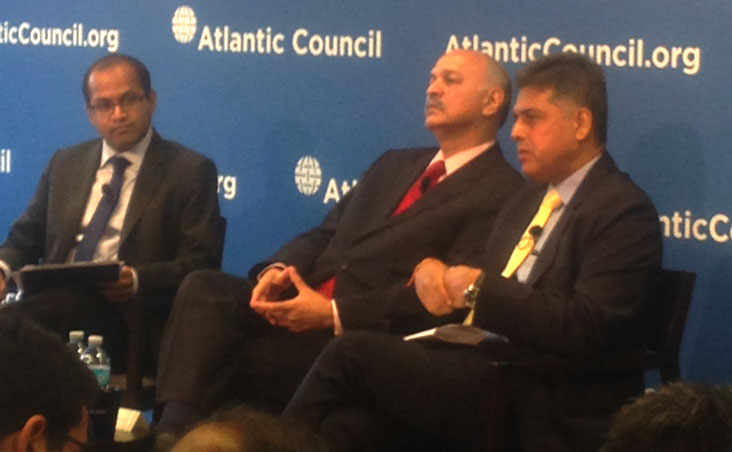 Former Information Ministers of Pakistan, India, have a cordial discussion on the role of media in relations between their countries

At a discussion on the role of the media in India-Pakistan relations, two former Information Ministers of Pakistan and India agreed that while the media can and should play a more positive role in improving relations between their countries, the major problem in continuing tensions is not media but political will.

Organised the South Asia Center of the Atlantic Council, a leading think tank in Washington DC on 25 July 2017, the discussion was titled “Media Diplomacy: Challenging the Indo-Pak Narrative”. The main speakers, Senator Mushahid Hussain, former Minister of Information and Media Broadcasting, Pakistan and Minister Manish Tewari, former Minister of Information and Broadcasting, India sat side by side and presented their views.

While they agreed with several of each other’s points, there were no flare-ups even when approaching contentious and difficult subjects. All in all, the entirely non-acrimonious discussion must have been a huge disappointment for those expecting the usual contentious head-butting.

“We as nations should have a strategic stake in each other’s economic development backed by the political leaderships,” said Senator Mushahid Hussain.

The speakers agreed on the need for a free movement of books, publications and news between the two countries.

Senior Congress leader Tewari commented that “officially certified truth” often becomes part of the narrative and stressed the need to allow journalists to work across the border. He also suggested that more “content co-production” across borders could help to improve understanding and avoid one-sidedness.

“Can our syncretic though strained intertwining be reimagined and reinvigorated for conflict should not be the new normal. Does the media have a role — other than that of a spoiler — to play in this paradigm?” asked Tewari, echoing his op-ed published a day before the session.

Citing the Shimla agreement which was was signed between India and Pakistan on July 2, 1972, Tewari said the dispute between the two sides is circumscribed this agreement and envisages that whatever outstanding disputes are there would be revolved bilaterally.

Explaining the importance of Track Two diplomacy, he said that when there are moments of tension between the two countries, there is a situation where they are not talking to each other, Track One and “half”, Track Two and Track Three are good ways of keeping the conversation going.

The speakers also agreed on the need to take incremental steps like easing the visa regime. “Steps like simple day visas between Amritsar and Lahore, allowing journalists to be stationed in both countries, co-produce content on digital and broadcast platform which actually will be a starting point”, added Tewari.

The discussion comes at a time of ongoing tensions between the two South Asian nuclear-armed neighbours and ceasefire violations.

“Talks might not produce immediate results, but engagement is necessary” -- Abdul Basit The fisherman’s tragedy