Climate change knows no boundaries… nor do people’s hearts 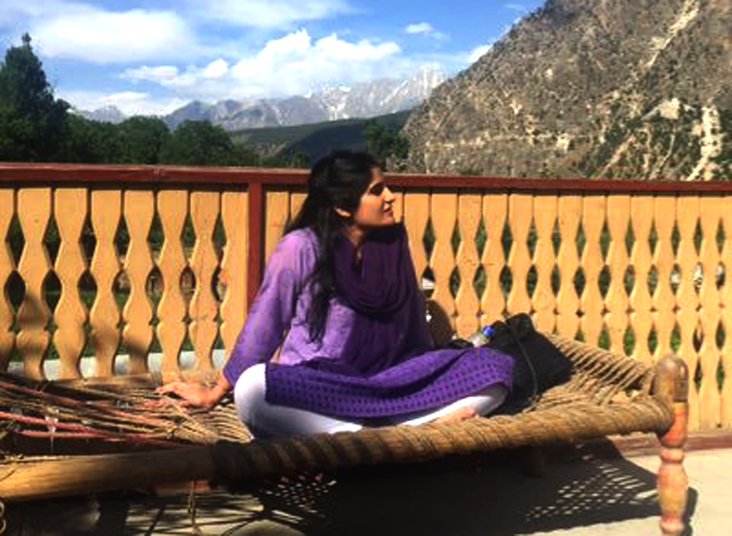 Taking a break in Kalash valley: Climate change affects everyone

Alizay Jaffer, 29, works with communities to help them cope with the impact of climate change and extreme weather events – all of which know no man-made boundaries. Not surprisingly, she formed lasting friendships with Indian colleagues while studying Modern History at the University of Essex ten years ago and subsequently during her MSc. in Environment and Sustainable Development at University College London.

The Islamabad-based development worker has received overwhelming support for her Facebook post on India-Pakistan relations (below) that several media houses picked up after thousands of people shared it – prompting her to start a blog.

Of course, there was some hate also – sadly, there is no shortage of bigots on either side of the border. “My favourite insult yet has been ‘here you go, another Aman ki Asha type’,” she says.

We say, the more the merrier.

A small slice of the heartwarming responses

In a follow up post Alizay Jaffer writes that among the comments she finds particularly confusing is: “’YOU DON’T KNOW WHAT IT’S LIKE TO LOSE A LOVED ONE IN A WAR’, and their solution to that is, (wait for it), more war. How does that make any sense? Haven’t enough people died?”

Overwhelmed by supportive messages by people “from Pakistan and India, and from ‘desis’ around the world” she raises another pertinent question, wondering “whether journalists and other media professionals have ever thought about the responsibility that comes with their job. If a message of peace and love from a nobody on Facebook can go viral and touch thousands of hearts, and encourage people, even if only for a minute, to think that peace is possible, then imagine the possibilities if the mainstream media stopped sensationalising news and didn’t care about ‘BREAKING NEWS’ every minute. Imagine the possibilities.”

And all those “who can’t help but spew hate” or who leave comments in an undignified manner, she sends across “a virtual ‘Jaadu ki jhappi’.’”

Below is her original post of September 29, reproduced in her new blog:

It’s strange, this affinity with India. I find myself getting increasingly upset at the abuse and hatred tossed from one border to another, with little rationale apart from the 69 year old chips on our shoulders. These chips have, over time, turned into boulders, and who doesn’t crumble under the weight of those?

It’s very strange, this affinity with India. When Amitabh Bachchan is in the hospital, we pray for his good health; when Ranbir Kapoor’s film is a hit, we’re prouder than Neetu and Rishi; we never deny that no one brings romance to life like the voices of Kishore and Rafi; they are in unanimous agreement that their local music scene is not a patch on ours; if we happen to interact abroad, they’re the only pardesis we include in the ‘desi’ category; their monuments carry our history; our language carries their roots.

It’s far too strange, this affinity with India. Like siblings, we retaliate to each other’s provocations. Ultimately, we both share the label of being impulsive and emotional in our responses to one another – ‘Look at what you’re doing in Kashmir’ ‘Hah, look at what you’re doing in Balochistan’; ‘You attacked us first in Uri’ ‘Have you forgotten about Kargil’?; ‘You started it!’ ‘No! You started it!’

Like orphaned trust fund babies, we feel entitled yet have no idea how to cope. They neither acknowledge nor respond to Muslims being massacred for eating beef in Gujrat, for instance, and we? We turn a blind eye to Christians and Hindus being physically assaulted for eating before Iftar in Ramzan. They’re destroying Kashmir, we say, Kashmiris have a right to be independent (or choose us, of course), but we forget how we throttled Bangladesh – why should a Bengali speaking majority not accept Urdu as its national language? We never speak about that, do we? Too soon, perhaps.

When I think about some of my best days and nights in the last ten years, more than 50% of them were spent with my brothers and sisters from across the border; sharing a meal, listening to music, discussing politics, or anything but; laughing, dancing, singing; but most importantly, completely aware yet in vehement passive rebellion against the lines that keep us apart.

Come to think of it now, it isn’t strange at all, this affinity with India. Our proverbial Lord and Master, the gargantuan power that rules us, ‘The West’, is an absentee parent; one we’re constantly trying to please but one who never really loved us anyway. If there is anyone for us, it’s each other. What’s strange is our reluctance to acknowledge this.

What’s strange is the burden we carry of decisions made in our pasts, based on an entirely different socio-political context, when a common, exploitative antagonist made sure we saw each other as the aggressor, and boy, did we fall for it. What’s strange is our prolonged blindness to the immense opportunities that lie before us as a unit, and the vast desolation that lies before us as enemies.

The strangest thing about our relationship, in fact, is our propensity to change roles. To the world, most of the time, we are siblings; constantly at loggerheads, trying to get into daddy’s good books so that he may buy us a toy, or take us for a drive, or better yet, increase our allowance. Other times, we are like a divorced couple, sharing space, constantly bickering over who lost out in the settlement, unable to finally come to terms with the fact that we are no longer together. It seems the scars of our separation are still so ripe, so painful, that they can’t accept that we left, and we can’t accept that they let us leave. In an event like this, we only find solace in making sure the other is just as hurt as we are, so we put in our all our resources, our best efforts, to do exactly that.

This moving Facebook post by a Pakistani girl on India-Pakistan relationship is a must read https://t.co/3XwNG9jcGR via @IndianExpress

I read today that India claimed they carried out a surgical attack in Uri. Ridiculous. I immediately read several, equally ridiculous Pakistani reactions; some hitting below the belt, others claiming that one shouldn’t expect more from mass murdering politicians, like the ones we have across the border. Somehow, suddenly, we are all too forgiving of our own ‘glorious’ politicians. It’s strange how quick we are to forget how much trouble governance is in, on both sides, when we jump up to point fingers.

I’m sure this news will leave me in a month’s time. What hasn’t left me is the news about a Pakistani Head of State’s arrival in Delhi for a test match, ultimately averting the threat of war; or an Indian politician putting his hand forward to greet his Pakistani counterpart, to curb tensions; or that time when Ganguly acknowledged that there’s no one greater than Wasim; or when Shoaib Malik married Sania Mirza; or that image of the guards in the most beautiful fraternal embrace I have ever seen, on Holi at Wagah Border. I suppose it’s because some of us look for peace, we hanker for it, while others, they look for war.

What will never be ‘just another event’ is one we never address. The fact that we are now divorced; the fact that our separation is painful for both of us; the fact that where there is now hate, there was once unity and a common pride; the fact that we allowed an external power to come in and manipulate us, and we fell prey; the fact that no one will know us like we know each other, because after all, we were once but one.

It is comforting somehow, that when I messaged one of my closest friends across the border, expressing concern over the destructive megalomaniac tendencies of our governments, he responded and said, ‘It doesn’t matter what they do, you know I will always love you’. It is comforting somehow, that in 20 years’ time, if you look away from the textbooks, and turn to your ancient scriptures or your holy books, it won’t take you long to see that since time immemorial, there is only one message they are trying to convey, only one message we should be paying attention to; and that message is Love.