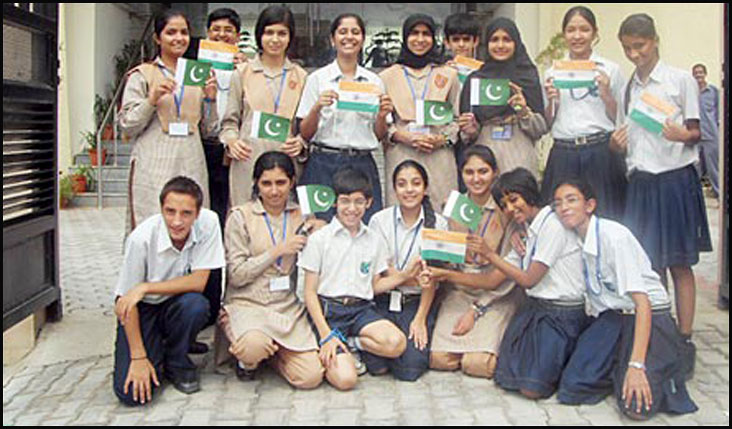 Enabling self-expression and cross-border understanding: Children from India and Pakistan at a workshop in India

Pakistanis and Indians can work wonders together as proved by the magnificent Indo-Pak tennis duo of Aman ki Asha Ambassador Aisam-ul-Haq and Rohan Bopanna. Another Indo-Pak partnership making waves is that of Pakistani Nida Shams and Indian Sharad Sharma, who are working with local communities to enable self-expression through comics. Lubna J. Naqvi interviews Nida Shams in Karachi.

Aman ki Asha: Tell us a little about this project and how it started?

Nida: Through Grassroots Comics we teach people how to identify their issues/problems, and express them through story writing and drawing, which are then exhibited as Wall Poster Comics. The story is primary while drawing is secondary. After a few sessions the participants realise that they are doing a very important job, they get a sense of ownership and feel like journalists reporting their own problems.

Grassroots Comics, started in India in several years ago; it first came to Pakistan in 2006 at a workshop in Lahore. People were happy to find an Indian resource person sharing this medium of self-expression and communication. People shared their day-to-day life stories and problems rather than Indo-Pak relations or ‘peace’. It was amazing how their lives reflected those of people across the border.

AKA: What sort of response did you receive, given that in Pakistan caricatures and pictures are sometimes considered anti-religion?

Nida: That’s an interesting question. When we started I also half expected people to object and say this is ‘un-Islamic’. This never happened, although our workshop involved participants from all kinds of backgrounds – from the highly educated to the very conservative.

AKA: You compiled ‘Bolti Lakeerain’ (Talking Lines), a comic book based on these comics published by World Comics Network. Who supported the project and what response have you received?

Nida: Sharad Sharma and I compiled ‘Bolti Lakeerain’ in order to spread “the thought of the common people to masses”, beyond the workshops. It is a completely indigenous venture — a book for the people by the people, a compilation of some of the numerous comics produced during the last five years. Each comic narrates a story with a significant meaning, created by ordinary people from Kakapir to Kashmir. These are the stories narrated during workshops that helped to open debate in society on several issues.

Since World Comics Network Pakistan is an informal group with no funds, when we were planning to publish ‘Bolti Lakeerain’ we approached the organisations that helped us to organise workshops earlier. Strengthening Participatory Organization, World Wildlife Fund, Indus Institute for Research and Education, Insaan foundation and Mass Awareness for Water Conservation and Development (UNDP) pooled in equal amounts of money.

People who attended the workshops learnt skills that gained immense significance in their lives, providing them a unique means to express themselves. This method is so interesting, easy and effective that with just two A-4 size sheets of paper and a pen, participants become capable of highlighting their issues and problems. Simplicity is the core of each story and it echoes in comics they create. The workshops were organised in villages, cities, schools, universities, and even jails, in collaboration with different organisations to impart the skill of comic making to the local people and to equip them with the art of self-expression. Some of the comics are created by those who cannot even read or write, but learnt to express themselves through pictures. We have trained many people in South Asia in this communication methodology.

We have received a great response, and appreciation from creators and contributors as well as reviewers in India and Pakistan. Plus the book has been recognised globally.

AKA: How did you and Sharad Sharma start working together?

Nida: I was first introduced to Sharad Sharma and World Comics India in 2006 in Colombo, during a South Asian conference, at a World Comics India (WCI) workshop. Sharad Sharma, who also founded World Comics Network, told me about his Grassroots Comics idea. He has a background in journalism, cartooning and television work. Currently he works as a freelance cartoonist and comics trainer based in Delhi. He is the founder and current Secretary General of World Comics India, an organisation which promotes Grassroots Comics as a communication tool in remote and difficult areas. He has also initiated many campaigns involving comics including Girl Child Rights, Children’s Participation in Local Governance, and corporal punishment. He has received many awards – an Ashoka Fellowship in 2005 for introducing Grassroots Comics, CNN IBN’s Real Heroes Award in 2008, the Kramaveer Award, 2009. He also received the Queensland University, Australia, Communication and Social Change Award, 2010 on behalf of World Comics India.

I joined him after attending the World Comics India workshop in Lahore, 2006 where he introduced Grassroots Comics with Insaan Foundation, a local organisation. After this workshop, we organised an ‘Indo-Pak People’s Comics’ exhibition in Islamabad and Lahore. Later World Comics Network Pakistan was formed.

Since then we have worked on various projects and conducted several workshops together in South Asia – in India, Pakistan, Nepal, and Sri Lanka – besides Benin, Brazil, UK, Finland, Sweden and Estonia.

AKA: How has your work helped India-Pakistan relations?

Nida: This success story is not just about two people but about two countries. It’s not only about us interacting but the involvement of many people. We have done many projects in which people from both sides of the border worked together, and we have held Indo-Pak workshops and exhibitions in both countries. When our teams work together we realise we have similar issues, values and interests; this changed our mindsets and helped us understand the larger scenario.

Our trainers and fellows interact with each other at social forums and groups, share thoughts and discuss matters via Skype video conferences. Workshops held in Pakistan draw from comics and stories in India and vice versa. We share our campaign videos with each other that are shown at these workshops and always get positive comments. In fact there is more interest for comics made in Pakistan in India and vice versa. Our creators have worked for an annual newsletter of India, participated in online conferences.

We have great stories how our creators changed their views about the Indo-Pak situation during this process. ‘Bolti Lakeerain’ will soon be published in India too. World Comics India will also organise an exhibition of Indo-Pak people’s comics in New Delhi.

AKA: How has it been to work together, living in countries where people find it difficult to visit each other frequently?

Nida: We have managed, thanks to the Internet which has reduced borders between our countries. But it’s still difficult. Each year World Comics India invites us for workshops and wants to engage Pakistanis but we often don’t get visas. We manage to visit each other’s countries once in a while but would love to visit more, learn and interact with more people. If we could get visas easily we could have frequent trainer and participant exchanges. We have many plans for Indo-Pak youth workshops and exhibitions but it’s difficult due to visa-related issues.

AKA: How many people have participated in these projects? How did you determine which works of art to include in the book, and what were the ages of the participants?

Nida: World Comics Network Pakistan has trained hundreds of people, aged 6 to 65, at workshops in Pakistan over the last five years – male and female, literate and illiterate, from adult literacy groups in Kashmir and Karachi University Mass Communication students, school kids and teachers, even women in jail. We have developed an Urdu comics manual. It is good to see the people’s interest for such material originally developed in India.

For the book we selected comics for chapters like Essential Education, Caring Community, Talking Terrorism, Load shedding, Gender, Health, Water and Environment. The book includes most of the comics produced in our workshops.

AKA: How do these workshops get people to express themselves?

Nida: Both adults and children find our methodology useful and easy. Many have become trainers. We have even trained government school teachers who are now using comics to simplify history and geography lessons in their classrooms. Comics have given a new direction to representation of silence, thereby creating a revolution in itself. They are easy to make, reproduced by a simple photocopier and distributed in a limited demarcated area, which invites local debates among people from different socio-economic strata.

AKA: What kind of things do participants draw?

Nida: The beauty of these comics is that people express themselves in their own unique styles, bringing out their culture, characters, location, problems and even solutions. In comics from Kashmir you always find mountains and the hardships of people living there. Similarly stories from coastal areas draw on sea stories; in comics from jail we see characters behind bars… Each line, each object speaks of the creator’s stories and conditions.

AKA: How are these similar or different from comics from across the border?

Nida: We find similar issues and problems in comics by people from both countries, with only the script being different. Yes, there is a local touch and difference in characters, costumes and so on, but still many similarities. I attended a workshop in Dehli and made comics in Urdu, and was amazed that Indian participants understood my story even though they couldn’t read my script.

AKA: What has been the general response to the exhibitions?

Nida: Our exhibitions always get a positive response from the people. People in Pakistan love these drawings as they are simple and the idea is unique here. What makes these comics different is the ownership of the content as well as local settings and drama. Another interesting thing that we have seen is the awesome link created between the creator of the comics and the readers.

We don’t believe in showcasing work in air-conditioned galleries for limited audiences. The comics are pasted up in all possible locations, like village meeting places, bus stops, shops, offices, schools, notice boards. We have also held mobile exhibitions on roadsides – we hang the comics on a string tied to electric poles or trees. People just love this!

We have found great talent at our workshops across the country and we try to keep them engaged in this movement. From each workshop we select a few participants and give them further opportunities. We train them as trainers, publish their work in magazines and books; an Indian newsletter has also reprinted them. Mass Communication students are now working with us full-time, since they realise the power of this development communication tool. Our entire network is run by students and activists, and all work is voluntarily.