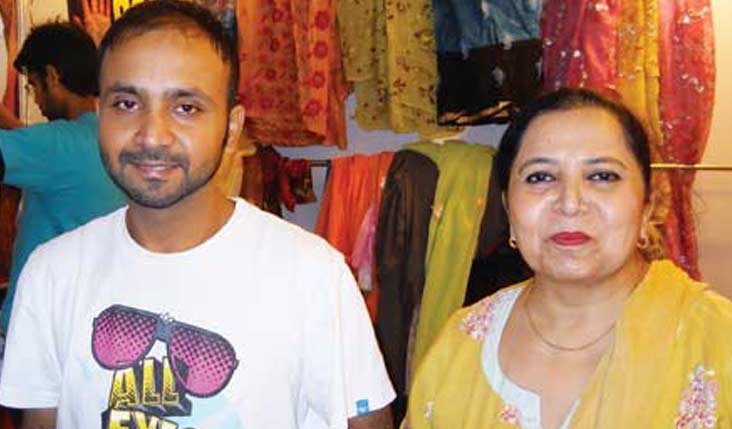 Farzana Farrukh and her son Zohaib: "This hatred must end"

It is thanks to Vikash Sharma, a student from Yamuna Nagar, Haryana, that I visited the Pakistani stalls at a trade fair in New Delhi – and had some interesting interactions, including one that has left me somewhat stunned.

Vikash had messaged me saying we should try to meet the Pakistani traders visiting India for the India International Trade Fair (IITF) at Pragati Maidan. I didn’t know there were Pakistani stalls there. Being busy at his college two hours from Delhi, Vikash could not join me on Monday morning. As I drove, I wondered if the Pakistanis were being well looked after, and had decent places to stay and eat. I hoped they had not encountered hostility, given the tense relations between our countries.

There are almost 50 Pakistani stalls at the fair, which draws over 100,000 visitors a day. The Pakistani stalls, taking up about a quarter of the area in one of the 27 halls, are a huge hit. Most seem to be manned by Indians representing Pakistani companies.

I asked around for Pakistanis and was pointed to the Gul Ahmed stall, headed by Huzaifa Essabhai, a senior merchandiser around 35 years old.

I asked him about his experience of visiting India.

“We (Gul Ahmed) have been visiting for many years,” he replied. “Never had any problems. The only issue is that they gave us (police) reporting visas this time which is a bit of a hassle.”

In general, he said, “It has been a fabulous experience. See how busy the Pakistan Hall is, compared to other halls. We have felt very welcome in India.”

Several shoppers I spoke to are regulars at the Pakistan Hall every year. “You get good quality clothes at a fraction of the price,” said one.

Further down, I met Farzana Farrukh from Abdullah Boutique, Lahore/Bahawalpur and asked her about her experience of visiting India.

his is my second time,” she said. “I was so excited because my parents came from Delhi. My Ammi used to tell me so many stories of how the Muslims, Hindus and Sikhs lived like one large family and how everyone participated in each other’s festivals and weddings. The business trip is just an excuse. I wanted to see Delhi. I have brought my son Zohaib with me this time.”

The general response has been good, she said. “But we haven’t had much time to go out yet. We will spend a few days after the fair on Nov 28. I have just one message. This hatred must end. We have to defeat those who are instigating it.”

The mention of Bahawalpur got a couple of other visitors excited, who said their families were from Bahawalpur. One of them, Rakesh Nath, lives in Delhi and always visits the Pakistan stalls to buy masalas and clothes for his wife. “It feels great to shop here. It feels as though I am connecting to the land of my ancestors”.

Further down, I met Tahir Alam from Hamail, a boutique in Karachi. “This is like coming home for me,” he said. “Money is not the object. I have family here that I love to meet. The only problem is the police-reporting visa.

We are businessmen. We should be exempted from these hassles.”

On the fourth day of the fair, a young Sikh boy came up to Tahir and asked if he could hug him. “I was pleasantly taken aback,” Tahir told me. “I hugged him warmly.

He sat next to me for a couple of hours, didn’t say much, then smiled and left. I felt very emotional. Just wish that the two countries become friends and people can travel normally across the border.”

I noticed that an elderly man had been following me, listening intently to my conversations. I asked him if he was Indian or a Pakistani, half-expecting the answer to be “Pakistani”, wanting to share his story with me.

“Indian,” he muttered and started walking away. I followed and asked him if he liked what he saw and if he had bought anything.

“I do not buy anything from Pakistanis,” he reacted angrily.

Perplexed, I asked him, “Then why are you here?”

He shot back, “They killed my father”.

“Why did you come here then?” I persisted.

“Khoon ka rishta hai insay (I am related by blood to them),” he said sadly, disappearing before I could say anything else.

I stood for a few minutes, trying to understand. Why would an old man walk around the Pakistan Hall, not buying anything or talking to any one, obviously angry and pained after so many years and yet term the connection as a blood relationship? Was he looking for a connection, like others, but unable break through the barrier of emotions? The look in his eyes was certainly not of someone coming from hate. There was a melancholy, a strong urge to connect with his roots but lacking the courage to do so.

It is easy for people like me, with no family history of violence and forced relocation to pontificate about moving on. Partition’s survivors and their descendants need closure.

This can only come when they are allowed to travel to the land of their ancestors. South Asia needs to confront the ugly reality that the Partition lives amongst us in the form of the hard borders and visa regimes that perpetuate this sense of alienation.

I wish our policymakers could talk to these people, exhibitors and visitors, who visit the trade fair. Many do so only to connect with those across the border.

The author is an IT professional and a peace activist based in Ghaziabad, India: [email protected]