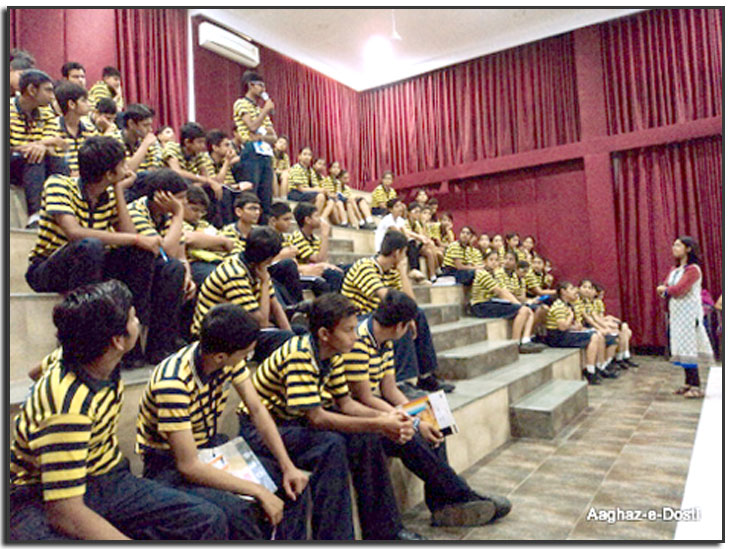 Even as politicians and media on both sides of the border continue to spew hostilities against each other, young people engaged in peace-building continue to try and counter the vitriol and stereotypes.

The Gujarat Public School workshop, titled “Understanding Conflict and Importance of Peace Building,” was an interactive session involving students from 9th-12th grade. Participants discussed the basics of conflict and peace-building, what conflict involves, factors like stereotyping, misconceptions sustained by lack of communication and miscommunication, that contribute to conflict, the importance of resolving conflict and focusing on the victims of conflict and the beneficiaries of peace.

“The students were quite active and conversant. There was a long discussion on the conflicts within the society, on the social evils like gender inequality, casteism and class inequality. The students also initiated a debate on the affirmative action, the pros and cons of reservation, the Land Bill and other issues,” say the organisers.

The second part of the discussion focused on approaches to peace-building, like creating a culture of peace and critical thinking. Speakers and students discussed this with relevance to Indo-Pak relations and the role of individuals in fostering peace between the two countries.

The theme of the Navrachana Sama workshop was “Understanding Partition and the Indo-Pak Conflicts”, also an interactive session involving students from classes 9th-12th.

The speakers talked about the perceptions in India about Pakistan, and the history of the conflict, the multiple narratives and the rhetoric around Partition that remain alive in both countries and shape perceptions about each other.

The second part of the workshop was a discussion on the major issues between India and Pakistan, like Kashmir, Siachen and Sir Creek. Participants also discussed the situation of soldiers, fishermen and prisoners, the primary victims of the conflict, and

the role that individuals can play in conflict-resolution and peace building between India and Pakistan.

Happy Independence Day, neighbours Gurus of inspiration and the fight for independence