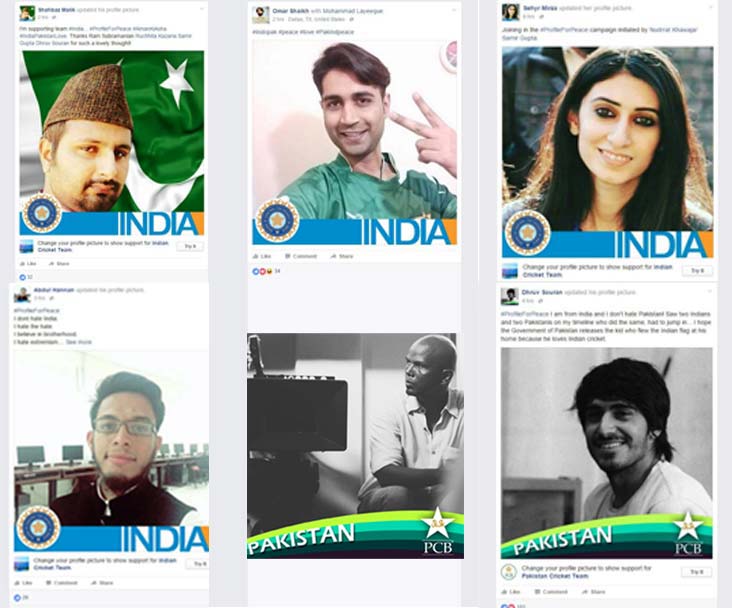 Indian and Pakistani cricket fans, despite being die-hard patriots, are changing their Facebook profile pictures to support the other team

Indian and Pakistani social media users are changing the narrative: Supporting the other country’s team does not make you unpatriotic

Two superlative batting efforts by Misbah ul Haq in the inaugural T20 World Cup in in South Africa in 2007 will remain etched forever in the memory of Indian and Pakistani cricket fans. Misbah’s valiant batting did not result in a victory for Pakistan — India won narrowly — but he won the hearts of many Indians, like me.

The main round of 2016 World Cup for Twenty20 cricket in India begins on 15 March 2016. This wildly successful fast-paced version of traditional cricket started in 2003 at inter-county tournaments between England and Wales with each team playing a single innings each, restricted to a maximum of 20 overs.

It has been less than ten years since India and Pakistan played their first international matches in this form that has gained popularity following the 50-over, 2007 World Cup in West Indies. India and Pakistan exited the first round but faced each other again at the nail-biting final of the inaugural T20 World Cup.

In the lead up to the T20 World Cup this time, the two teams met for the Asia Cup in Mirpur, Bangladesh. In a match that will be remembered for Mohammad Amir’s spectacular bowling, Virat Kohli showed his class and steered India to victory.

But the most memorable moment of the match was at the end when Kohli walked up to Amir to acknowledge his effort. In a post match interview, Virat Kohli showed maturity beyond his years in praising Amir. He said, “I actually congratulated him while he was bowling… I was so happy to play such an amazing spell. He is a world class bowler.”

Some Indian politicians, however, did not share Kohli’s maturity. In a terrible show of narrow politics, the Himachal Pradesh government refused to guarantee security to the visiting Pakistan team for their scheduled follow-up match in Dharamsala. It was only after Chief Minister Mamta Banerjee gave personal assurances of security to the Pakistan Cricket Board that the match was shifted to Kolkata and the Pakistan team allowed to enter India.

The immaturity of the Himachal Pradesh government finds echoes in an earlier move by the Punjab government in Pakistan. Umar Daraz, a Virat Kohli fan in Okara, Pakistan, was so excited by Kohli’s phenomenal batting in the T20 matches in Australia that he hoisted an Indian flag atop his house.

The police arrested Daraz and charged him under Section 123-A of the Pakistan Penal Code (PPC) and provisions of the Maintenance of Public Order that relates to “offences against the state”. The sub-section used to charge Daraz relates to “condemnation of the creation of the state, and advocacy of abolition of its sovereignty”.

On 12 March, 2016 I was taken aback to see a Pakistani journalist friend, Nudrrat Khawaja change her Facebook profile picture to support the Indian cricket team, using the hashtag#ProfileForPeace. This spontaneous online campaign catalysed by the Mumbai-based ‘artivist’ Ram Subramaniam in Oct 2015 had gone viral. People have since used it as a way to ask for peace every time the opportunity arises.

Nudrrat’s courage and generosity of spirit reminded me of a conversation I had just with my niece Charu Goel, who said that the chances of peace between India and Pakistan in the foreseeable future were nearly zero. I replied that as an analyst of the India Pakistan relationship, I would agree that there are many seemingly insurmountable obstacles in our way. However, as a peace activist, these are exciting times. I told her that on that day alone, 12 March 2016, 1,844,985 Indians and Pakistanis formed friendships on Facebook.

Kohli fan Umar Daraz: behind bars for hoisting an Indian flag in Pakistan

One of them is a very dear friend from Pakistan, Tariq Jamil Khan, one of a family of proud Pakistanis who wear their patriotism on their sleeves. When Tariq bhai wrote to me that he was thinking of changing his profile picture to support the Indian cricket team, I was excited and also as worried for him.

I knew that this would not go well with many of his family and friends. One of my own good friends from college and someone I cared for was very upset with my profile picture change. He warned me publicly and “unfriended” me on Facebook despite persuasive comments addressed to him by Tariq bhai and some other friends.

Sure enough, Tariq bhai was called a traitor by many of his Facebook friends. He faced a barrage of angry comments just like I did from some of my close family members on Facebook and WhatsApp.

Our critics think that we have gone too far. They say that it is honourable to seek peace with the other country, but supporting its cricket team is taking this too far. One relative asked me how much the ISI has paid me to do this. Apparently we have hit a very raw nerve.

I wrote to Tariq bhai that we are entrepreneurs of peace. We are pushing the envelope for what is possible for India and Pakistan’s peace activists. Many people are comfortable with the status quo and we are disrupting that.

Many of our loved ones who are upset with us right now do not realize that all of us including them and their children will benefit from peace. As I said to Charu, we are facing a massive brick wall of hate and we are hammering it from both sides.

We love our respective countries but we love the people from across the border as well. Our profile pictures are steps of defiance against those who feel entitled to decide who we should love or hate based on nationality.

I am a passionate cricket fan for whom Tendulkar is like a demi-god. But I respect and appreciate the cricketing skills of Saeed Anwar and Wasim Akram too. I refuse to let hate-mongers dictate to me who I should support.

Through these peace overtures, we are knocking holes in that wall of hatred in order to reach out and hold each other’s hand. The wall will come down once we have created a critical mass through these small holes. When it comes crashing down in a heap one day, many will be surprised and call it a miracle.

Many generous Pakistanis opened my eye to the possibility of love across the barbed wire. I am trying to do the same in my own way. Together we shall overcome this mountain of hate.